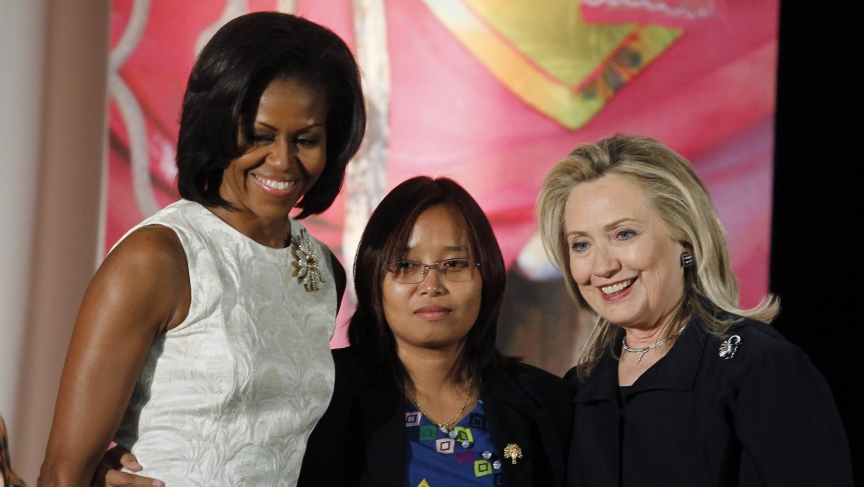 Zin Mar Aung of Myanmar (center) receives congratulations from First Lady Michelle Obama and then US Secretary of State Hillary Clinton as she receives a State Department 2012 International Women of Courage Award.

President Barack Obama has touched down in Myanmar for his second diplomatic visit, just as a political reform movement in the nation also known as Burma has begun to stall.

The timing worries Zin Mar Aung, a political activist from Myanmar who is now a fellow at the National Endowment for Democracy.

"Before President Obama's 2012 visit, we can see some kinds of political liberalizations in our country, for example, like releasing political prisoners," she says. "But after 2012 up to now, we don't see any liberalizations. We are very much concerned about the direction of our country."

Myanmar has long been known for its shocking record on human rights. From 1962 to 2011, a military junta held a firm grasp on power and squashed all dissent. That's when Burma's generals imprisoned Zin Mar Aung for 11 years because of her involvement in the country's pro-democracy movement.  She spent nine years in solitary confinement before she was released when promises for reform were riding high in 2009.

Zin Mar Aung says today Burmese are not encouraged by the pace of reform, and many wonder if pro-democracy parties will make a strong showing in next year's elections.

"The most important thing is that before 2015 general election we need to amend 2008 constitution. The military is still getting veto power," says Zin Mar Aung, who has been in the US since late September. "They are still influencing our country's critical institutions, like even in business and administration and parliament."

Myanmar is led by a nominally civilian government headed by a former general, President Thein Sein. But its 2008 constitution bolsters the military's role in government, ensuring the armed forces retains a quarter of the seats in the country's parliament and control of key cabinet posts — the interior, defense and border affairs.

Zin Mar Aung says Myanmar needs to reign in its powerful military, and allow a variety of political parties to take a more active role in society.

And she says she's worried that this visit by President Obama might lend legitimacy to the slow pace of reform and lend credibility to the country's military rulers.

"After the first visit of President Obama, we, especially ordinary people, their daily life is not that much changed and they do not enjoy yet the democracy, and human rights and freedom," she says. "So we still need to be engaged to get our dreams."