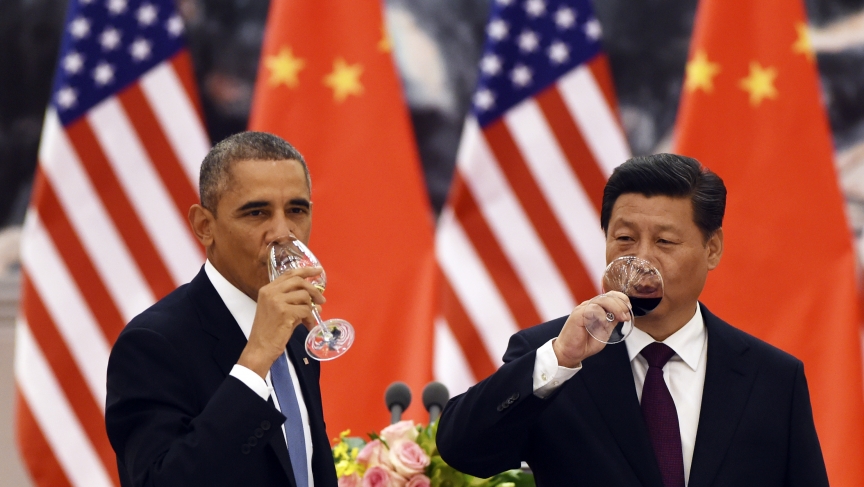 US President Barack Obama and Chinese President Xi Jinping can raise a glass to their surprise announcement on climate change. But experts say it’s just a start.

Sino-American relations are fraught with stubborn disagreements. Cyber crime, human rights, press freedom and the ongoing protests in Hong Kong are all on the list. The governments of the world’s two largest economies, it turns out, simply do not see eye-to-eye on lots of things.

But Barack Obama and Xi Jinping – whose nations are also the worst greenhouse gas emitters on planet Earth – have managed to keep hope alive for the possibility of progress on the issue of global climate change.

In dual announcements on Wednesday in Beijing, President Xi vowed that China’s level of carbon emissions would peak around the year 2030, and then start to decrease as the country relies more on cleaner energy. For his part, President Obama said that by 2025, the US would emit 26 to 28 percent less carbon dioxide than it did in 2005.

As it stands, the climate deal falls short of a full-fledged diplomatic triumph. For starters, it is built on presidential pledges, not a formal international agreement. “And it’s not a climate success,” says Sam Geall of ChinaDialogue.net, which reports on environmental news in China.

But these public commitments from Obama and Xi represent a breakthrough. They provide, “a framework around which we can start to build ambition towards lower-carbon growth,” Geall adds.

Months of talks between the two sides went into this announcement, but few observers expected an agreement to emerge as early as this week’s US-China summit in Beijing, host of the 2014 Asia-Pacific Economic Cooperation (APEC) gathering.

Geall was surprised to see a deal reached so soon. “This really helps to speed up the timeline for action on climate towards a deal at the [United Nations], which everyone is hoping to see in Paris at the end of 2015,” he says.

Beijing is committed to moving the Chinese economy toward a cleaner growth model, Geall says. And that means cutting carbon emissions by reducing China’s reliance on fossil fuels, especially coal. But making this happen will not be easy. Setting a 2030 target date for peak emissions is one thing. What is less clear, Geall says, is just how high that peak will ultimately reach. In other words, what exactly will China’s emissions look like at that time? How many tons of carbon dioxide will China be releasing 10-15 years from now? How much coal will the country will burn?

“Some Chinese analysts say that by 2030, it’s likely that China’s emissions will be around three times the US level,” he says. “The detail of what China actually commits to and how we flesh out that ‘peak’ actually matters a lot.”

There are big domestic hurdles on the US side as well. The Republicans in Congress, fresh off their mid-term election victory, were quick to pour cold water on Obama’s pledge. House speaker John Boehner accused the president of waging a “crusade” against affordable energy.

“This announcement is yet another sign that the president intends to double down on his job-crushing policies no matter how devastating the impact for America’s heartland and the country as a whole,” said Boehner, according to the AFP news agency.

Still, Geall and other experts see this as a starting point. “It shows that there’s a level of trust, really unprecedented level of trust, between China and the US, on climate issues. [It’s] probably the one ... bright spot on the APEC meeting.”