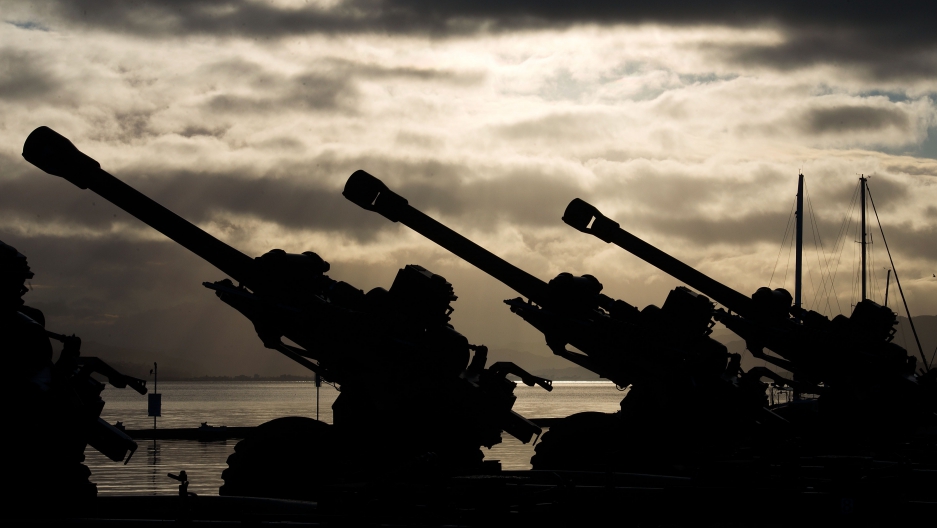 Ten 105mm Howitzers sit silent, waiting for the personnel from 16th Field Regiment of the Royal Regiment of New Zealand Artillery to fire a 100-gun salute during a ceremony to commemorate the centenary of the start of World War I in Wellington on August 4, 2014.
Credit: Marty Melville
Share

Editor’s note: This analysis is part of a Special Report called “The Eleventh Hour: Unlearned lessons of World War I” launching in full this week, nearly a century after the Armistice Day of Nov. 11, 1918 that ended the war.

"It is very queer that the unhappiness of the world is so often brought on by small men.”  ― Erich Maria Remarque, "All Quiet on the Western Front"

How strange yet appropriate and terribly prescient were these words from a German who served in the trenches of World War I.

Remarque, whose 1929 novel is not only the seminal tale of World War I but perhaps of all wars, cannot have known of the “small man” fighting in the same army who would unleash even more misery upon the planet in the next war.

Like Remarque, Adolf Hitler served in a reserve regiment transferred to the slaughterhouse of the Western Front. Both were corporals. Both were wounded. The similarity ends there. The experience of dehumanized mass murder turned Remarque into a committed pacifist. What the war did to Hitler, of course, needs little exposition here.

World War I radically changed the political and economic course of human history. But first and foremost, it introduced mechanized technology and the soulless calculus of attrition into warfare. No longer would armies slowly close on each other as they maneuvered for control of a battlefield. From here on, war would be total. It would stretch every national sinew, demanding the redirection of manufacturing, food production, transportation, media and the civilian population – all in the service of “victory.”

The extent of the slaughter along the entrenched front lines of western Europe still defy imagination. After a few weeks in 1914 in which the surprise German thrust through neutral Belgium caught the French off guard, the offensive faltered and within weeks defensive fortifications and trenches ran from the English Channel to Switzerland.

This stalemate was entirely unanticipated by military theorists of the day. But weapons capable of killing from long distance and in large groups – rifled infantry weapons, machine guns, artillery, mortars – soon to be joined by flamethrowers, aircraft and poison gas – had changed the physics of warfare in ways that military commanders on both sides never fully absorbed.
In between futile charges “over the top” into the “no man’s land” that separated the warring sides, where barbed with and machine guns awaited, life in the trenches was filthy, cold, disease-ridden and liable to end suddenly in a bombardment.

“Soldiers witnessed horrific scenes of carnage, in which death – from gas or mortar attacks, or in hand-to-hand combat – was commonplace,” the British army’s official history reads.

Disease, in fact, killed as many as combat on the Western Front – and that does not include the still poorly understood outbreak of Spanish influenza that killed over 25 million people in 1918, about half of them in the armies of all sides.

Or, in a different vein, from the American war poet Joyce Kilmer, himself shot in the brain by a machine gunner shortly after penning the poem Rouge Bouquet.

In a wood they call Rouge Bouquet
There is a new-made grave today.
Built by never a spade nor pick
Yet covered with earth 40 meters thick.
There lie many youthful fighting men,
Dead in their prime,
Never to laugh nor love again
Nor taste the Summertime.
For Death came flying through the air
And stopped his flight at the dugout stair,
Touched his prey and left them there,
Clay to clay.
He hid their bodies stealthily
In the soil they fought to free
And fled away.

Only toward the end of the war, when commanders finally began to deploy newly developed tanks in mass offensives, was the bloody stalemate broken. Even then, the assaults often petered out for technical reasons, and ground gained at great loss of life (as at Passchendaele in July 1917) was often recaptured quickly. Only in 1918, at Amiens and then the Second Battle of the Somme in August, did tactics and brute force finally break Germany’s resolve.

Even then, though, the mortal blow came from the German home front: on November 3, 1918, sailors of Germany’s High Seas Fleet, bottled up for much of the war by a Royal Navy blockade, rose against their officers in the port of Kiel, triggering a revolution that would sweep away the Kaiser, force Germany into an armistice and ultimately dissolve the German Empire.

The peace treaty that would seal Germany’s fate failed miserably to heal the scar on Europe’s post-war frontiers. Hitler, before and after his rise, railed against those he felt had sold out Germany, debasing the blood spilled in the trenches. The sailors of Kiel, he said, were Bolsheviks. The Jews and Prussian elites had betrayed the army to protect their economic interests.

In 1933, when Corporal Hitler finally became Germany’s chancellor, one of the first acts of his new government should have given everyone pause: He banned Remarque’s books, consigning them to the Nazi pyres as decadent and insulting to the German nation.

Remarque fled to Switzerland, where he died in 1970. But to this day, the land around the trenches regularly push up shell casings, weapons and human remains. Some facts are harder to erase.