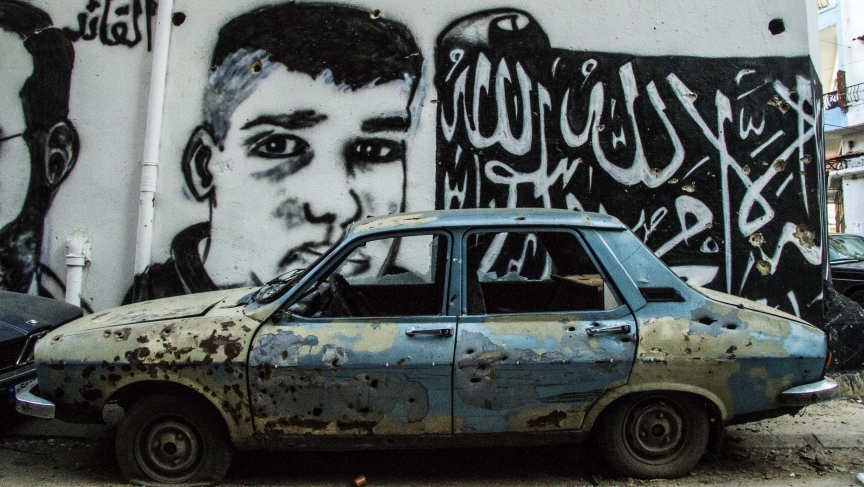 Fresh martyr portraits are painted on a side street in Tripoli's Bab al-Tabbaneh neighborhood. Clashes last month in the economically deprived neighborhood left at least 11 soldiers, 8 civilians and 22 militants dead.

The streets in Tripoli’s Bab al-Tabbaneh neighborhood are narrow and congested. Vegetable carts compete with cars and motorbikes for room, trying to maneuver around crumbling buildings riddled with bullet holes.

But the violence that has racked the city, leaving the Swiss-cheese facades behind, isn't just another spillover of the Syrian civil war next door. The residents here say the fighting has been going on for decades as locals fight for scraps of power and resources that the weak Lebanese state can't offer.

Lebanon's second city, about an hour north of Beirut, is a model of government neglect. Unemployment is sky-high; school dropout rates are off the charts; much of the community here is trapped in crushing poverty.

Those living conditions, and a sense of hopelessness, are blamed for fueling some of the worst violence this city has seen in years. Last month, clashes erupted between gunmen and the Lebanese military. Two days of fighting left at least 11 soldiers, eight civilians and 22 militants dead.

Those are seemingly the only things that get the city any attention from the state. These days, the central government is visible in Bab al-Tabbaneh: Tanks, jeeps and soldiers stand ready at major intersections in a show of force.

One resident of Bab al-Tabbaneh, who asked to be called only Abu Ahmed, took me on a tour of the neighborhood. He points up to a building where a family, their balcony almost completely destroyed in the clashes, hangs a blanket where their window used to be.

There is a sectarian element here that mirrors the conflict in Syria. Bab al-Tabbaneh is overwhelmingly Sunni, as are the rebels fighting Syrian President Bashar al-Assad; its perennial foes next door in the neighborhood of Jebel Mohsen are Alawites, the same sect to which Assad and much of Syria's ruling elite belong.

Abu Ahmed points to another new feature of his neighborhood, something that’s only just started appearing over the last few months: the black flags of ISIS.

“See this, this flag, that’s ISIS,” he says pointing to a cluster of the flags hanging from balconies above us. “There is no god but God,” he says reading out the white script above the seal of the prophet Muhammad. But he still plays down that apparent links to the civil war across the border, saying the flags have more to do with Lebanon's own internal divisions.

“The flags are ISIS, but the people aren’t from the group, they’re only supporting it,” Abu Ahmed insists, claiming there aren’t any foreign fighters in his neighborhood. He maintains the flags simply show the Sunni population here feels abandoned by their government. 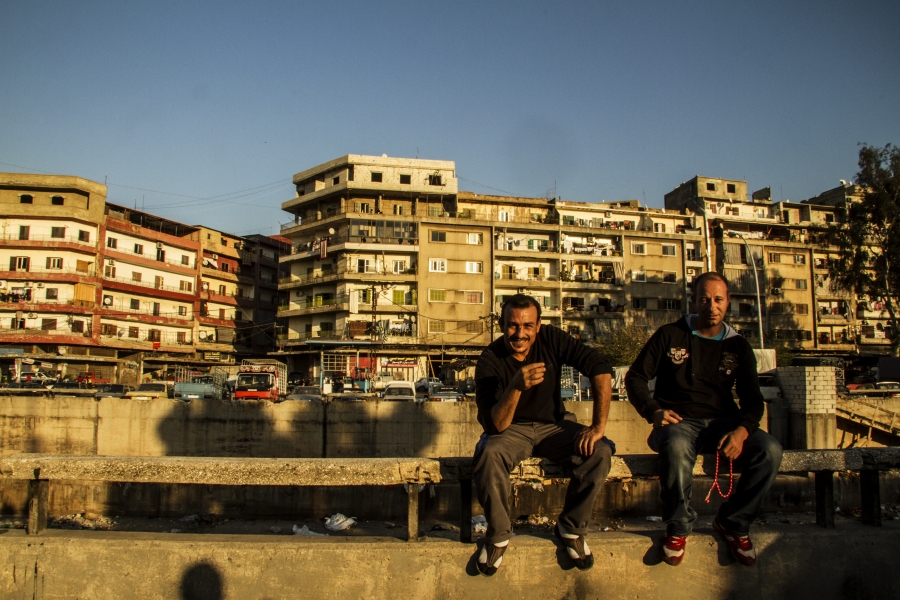 Bab al-Tabbaneh residents Usama and Hussein sit on a railing at the edge of the neighborhood. They say for men like them with families to support there isn't enough work in Tripoli and while they're against extremist groups like the Islamic State, they can understand why it attracts many of their neighbors desperate to make a living.

“When men don’t have work, they take up guns and cause problems,” Abu Ahmed says. If there were more jobs in Tripoli, people wouldn't need to fight.

Regional analysts say that should be a lesson — not just for Lebanon, but for the entire region.

“This is the problem of Lebanon as a whole,” explains Sahar Atrash, the senior Lebanon analyst with the International Crisis Group. “You have a political class not keen on addressing any of the deep rooted problems. People [in Tripoli] lack basic needs when it comes to education, to services, to health care. For many, being part of armed group is a way to earn a living.”

Atrash explains that while the root causes of unrest in Tripoli have been known for years, nothing has been done to address them. Violence there is just repeatedly put on hold by a series of quick-fix ceasefires.

“What we see is a reaction to the immediate crisis ... without addressing its causes,” Atrash says. And when government crackdowns come, they are are often indiscriminate and fuel tensions, Atrash says. "We are seeing some arrests of terrorists or jihadists, but even the way the Lebanese authorities are dealing with the problem is just exacerbating it.”

It's a perfect recipe for perpetual conflict.

On the streets of Bab al-Tabbaneh, many residents agree with Atrash.

“Things now are good now, thankfully,” says one man, who asks that his name not be used. He works in a small repair shop, where today he’s fixing the fender on an old Mercedes. He says he’s glad the clashes have ceased and the military is on the streets, but what he and his family really need is more work and better pay.

He makes just enough to get by, he says, but not enough to give his children a better future — and ensure they won’t be tempted by groups like ISIS.