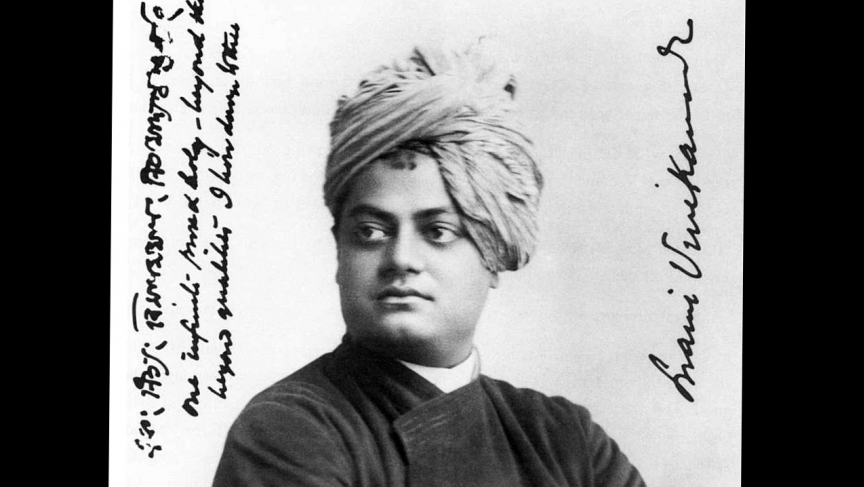 A photograph of  Swami Vivekananda in 1893 during his visit to Chicago. On the left, Vivekananda wrote: "One infinite, pure and holy – beyond thought, beyond qualities, I bow down to thee."

Yoga is many things to many people. To some it's just a form of exercise, to others it's about mindfullness and meditation. Now, in India, it's also a cabinet portfolio.

Prime Minister Narendra Modi appointed a "yoga minister" to his government on Monday, tapping Shripad Yesso Naik to promote the traditional medicines and practices of Ayurveda, yoga, naturopathy and homeopathy.

Modi himself practices yoga daily. He's so passionate about it that he asked the United Nations in September to consider an international yoga day. He also discussed the ancient Indian discipline with Barack Obama during a recent visit to the US.

Modi is a follower of Swami Vivekananda, a Hindu monk who played a key role in introducing the Indian philosophies of Vedanta and yoga to the Western world. He's also credited with bringing Hinduism to the status of a major world religion during the late 19th century.

Vivekananda first shot to fame at the World Parliament of Religions in Chicago in 1893. In his speeches, he called for tolerance and the end of religious fanaticism.

"His followers told him to ... present Hinduism to the west," says Pravrajika Shuddhatma Prana, another of the swami's followers who lives and works at the Vivekananda Ridgely Retreat in Stone Ridge, New York. "The very first talk he gave at the Parliament of Religions, he got a standing ovation for several minutes because people were so impressed."

To those used to traditional Christian views, the swami's ideas on yoga and meditation were exciting and different. ​He built up huge demand, and people flocked to his lectures.

The swami ended up going on regular tours of the US for years. During that time, he spent long periods with followers at the country home in Stone Ridge.

"The Vivekananda Retreat was actually an estate that was owned by some friends of his," Prana explains. "They invited Swamiji to come and spend some time — just to rest because he was giving talks and lectures."

Swami Vivekananda died at the age of 39, but his legacy lives on at ashrams around the world — and with his influence over Narendra Modi. In many of the Indian prime minister's interviews, a statue of the swami can be seen in the background. Prana says that Modi considered a monastic life at one point.

But in the end, the monks apparently convinced Modi that his talents would be better served in politics.