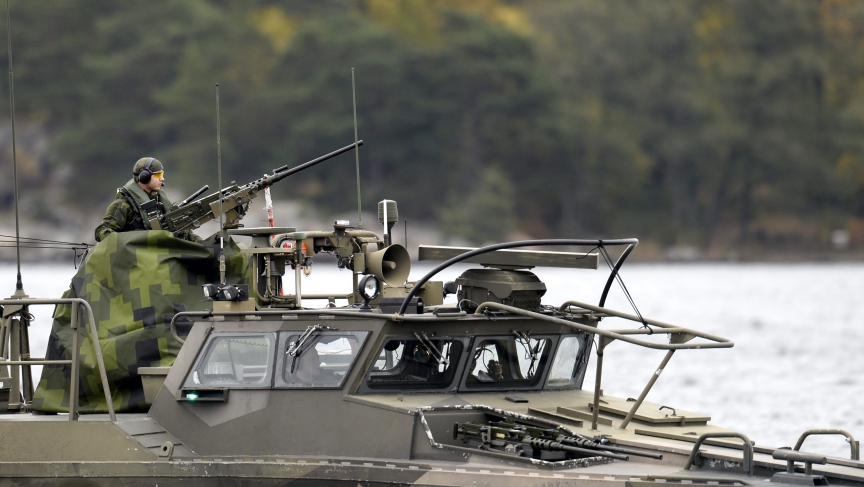 Crew members onboard a Swedish Navy fast-attack craft stand guard at the Stockholm archipelago during a hunt for a suspected Russian submarines on October 18, 2014.

Twenty-five years after the Berlin Wall fell, the Cold War might be making an unwelcome comeback.

New research by the organization points to 40 suspicious and dangerous incidents in the past year involving Russian military planes, ships and submarines. That included a sub hunt near Sweden, simulated cruise missile attacks on other nations and a near-miss between a Russian military plane and a Scandinavian Airlines passenger jet.

"What President Vladimir Putin is trying to do — having invested a lot of money in the Russian military in recent years, and continuing to do so — is beginning to flex Russian military muscle." The intent is to "demonstrate to the West that Russia is back as a military power and needs to be treated with respect."

Kearns say the wide range of incidents suggests Russia's military is adopting a more assertive, even aggressive posture. "Russia may be testing how good NATO's defenses are and, at the same time, training Russian military personnel in near-combat conditions against a high-tech opponent like NATO," he says.

And all of those incidents mean a bigger risk of unintended escalation, especially with relations already tense over Ukraine.

"History tells us that one of big problems is that events begin to drive policy," Kearns says. "That's the big risk here: First, there's an incident; then potentially one incident escalates into something else and triggers a dynamic in which both sides believe that their prestige and their interests are sufficiently at stake, so that it becomes very difficult for either of them to de-escalate."

The ELN report calls for some kind of military-to-military communication and coordination. That would increase predictability on all sides, Kearns argues, and “give leaders and commanders on the ground much more time to make sensible decisions rather than to feel that they're under possible attack."

And the group has one final, chilling observation: "To perpetuate a volatile stand-off between a nuclear-armed state and a nuclear-armed alliance and its partners in the circumstances described in this paper is risky at best. It could prove catastrophic at worst."