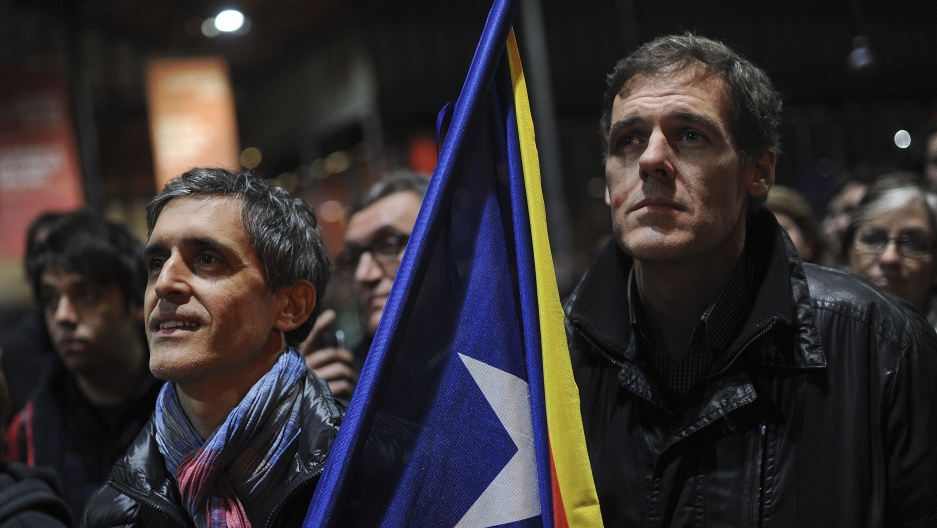 Wondering what next: The 1.86 million who voted for independence represent less than a third of the electorate.
Credit: Josep Lago
Share

LISBON, Portugal — When the Catalans finally had their say on Sunday, more than 80 percent of those who cast their ballots voted to split from Spain. But despite the massive majority, the restive region may be no closer to independence.

Denied a real referendum by Spain's constitutional court, Catalan separatists instead set up voting booths across the northeastern region to host an informal, non-binding "consultation" asking citizens if they want Catalonia to become an independent state.

"Catalonia has proven that it wants to govern itself,” Mas told a news conference in the regional capital Barcelona. "Catalonia has made a quantum leap in its quest to be able to decide its own political future.”

The vote leaves Mas with a series of problems, however.

Not least among them, the Spanish government refuses to recognize the results. It denounced the vote as a "useless and sterile" farce and illegal act of "pure propaganda."

Then there are the numbers. The 1.86 million who voted for independence represent less than a third of the total electorate. Most voters simply stayed at home. The majority are likely to be opponents of independence whose leaders called for a boycott of the vote.

So although the organizers hailed the turnout of 2.3 million, the exercise was far from a ringing endorsement of independence from an electorate estimated to total 6.3 million.

"It is a significant number that are dissatisfied with Spain, but it's only a minority," Jose Ramon Bosch, president of Catalan Civil Society, an anti-independence group, told Spain's Onde Cero radio.

Although he welcomed the peaceful and "festive" atmosphere during the vote, some pro-union politicians cast further doubt on the legitimacy of the results by pointing out that polling stations and vote counting were organized by independence campaigners.

Still, the size of the yes vote did provide some propaganda success for the independence camp.

The separatists' slick campaign to win international support will be helped by the way headline writers around the world ignored the vote's stay-at-home factor. "Most Catalans Want Independence From Spain According to an Informal Vote," read a Time magazine headline.

Mas said he would use voters’ backing to press for a better deal for his region from the authorities in the Spanish capital, Madrid.

That would include devolving more powers to the regional government in Barcelona and in particular greater control over Catalonia's tax revenues, which many Catalans resent being used to fund poorer parts of Spain.

Although Prime Minister Mariano Rajoy has hinted he'd be prepared to discuss regional finances, there's no sign of any movement from his conservative administration on Mas's main demand —Catalonia’s right to hold an official independence referendum.

Rajoy not only secured a constitutional court ban on the Catalan government's original referendum plan, but sought an injunction to prevent Sunday's informal poll. Legal action may still be pending over the use of local government property or staff.

Meanwhile, the Catalan government is facing pressure to call early regional elections in the hope that an increased vote for pro-independence parties would give a further boost to the separatist cause.

A glance at Monday's headlines was enough to gage the gulf that's opened up between the two sides.

"Massive Nov. 9 demands a political solution," wrote the leading Barcelona daily La Vanguardia. "This is the way to do it," read the top line of another Catalan newspaper, El Punt Avui, adding that the results "put the Spanish state in a very complicated situation."

In contrast, "Farce and disobedience" was the banner headline in Madrid's ABC newspaper, while another conservative daily, La Razon, ran a full-page picture of Mas with the words "disobedience, prevarication and slight of hand."

Nevertheless, there were some signs of compromise on Monday.

The leader of the main opposition Socialist Party, Pedro Sanchez, traveled to Barcelona with proposals for constitutional change that would recognize Catalonia’s special situation within Spain.

"Catalonia has injected urgency into the need for constitutional reform," Sanchez said, adding that all Spaniards would benefit from improving the 1978 constitution. "The best way to defend it is to renovate it."

More from GlobalPost: Tinder not working for you? This German website may have an alternative

Opinion polls have indicated most Catalans would prefer a solution granting the region more powers within Spain.

Many hope such a framework could end a dispute that’s threatening to dominate politics in Madrid and Barcelona at a time when the country needs to revive economic growth, bring down 23 percent unemployment and tackle corruption.

But with Sunday's vote seeming to toughen positions among hardliners on both sides of the independence debate, a deal in the short-term looks elusive.