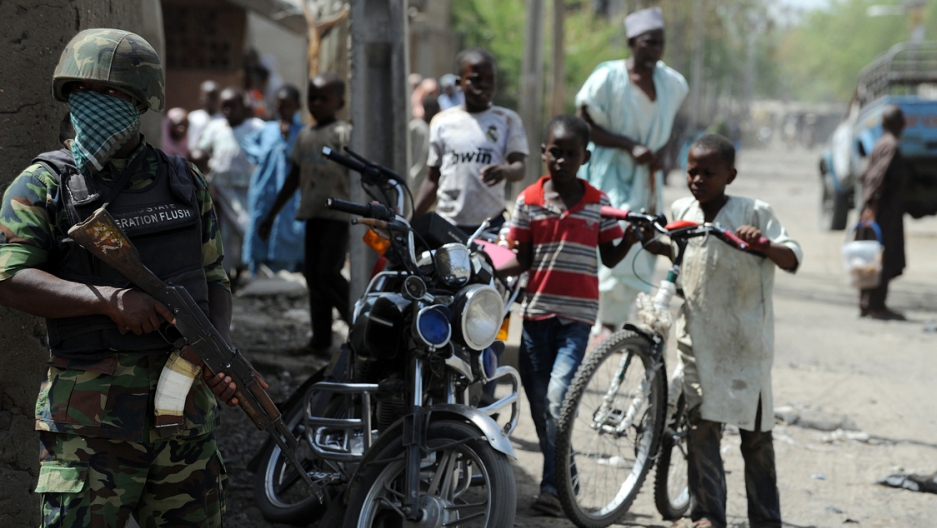 JOHANNESBURG, South Africa — The attack was typically bold, and brutal: As schoolboys gathered for Monday morning assembly, among them stood a suicide bomber dressed in their very school uniform, explosives hidden in a backpack.

Like countless other massacres attributed to the group, schoolchildren were the target — in this case, boys attending a non-Quranic school.

Five years into the insurgency by Boko Haram, little headway has been made in halting the attacks that have killed thousands and displaced hundreds of thousands more in Nigeria's northeast. Despite international attention after the abduction of more than 200 schoolgirls from the town of Chibok in April, similar attacks have continued apace.

There was a brief glimmer of hope last month, when the Nigerian military announced it had reached a ceasefire following talks with Boko Haram. A government official said the Chibok schoolgirls would soon be released.

A day later, the ceasefire had crumbled, as the attacks continued. Abubakar Shekau, leader of Boko Haram, dismissed reports of a truce, and said the Chibok girls had converted to Islam and been married off to fighters.

If anything, Boko Haram appears to have become emboldened in recent weeks.

Monday's school bombing followed the release of a new video from the group, in which Shekau again rejects claims of a ceasefire and boasts of having established an Islamic caliphate. In another attack on Potiskum, less than a week ago, a suicide bomber targeted a Shia Muslim religious procession, killing 30 people.

Since 2009, Boko Haram has seized dozens of villages and towns, and attacked schools, churches and mosques. The group aims to establish an Islamic state in Nigeria, which is Africa's most populous country, and has a majority Muslim north and predominantly Christian south.

Boko Haram, which means “Western education is sinful” in the local Hausa language, believes that girls should not attend school, and that boys should only pursue Quranic studies. Males are slaughtered; females are abducted and forced to be wives and slaves.

More from GlobalPost: A lesson from Nigeria's president in how not to handle a crisis

There is growing frustration over the Nigerian government's failure to stem the violence. Following the school attack in Potiskum, angry residents blocked government forces from reaching the school, pelting the soldiers with stones.

A general election is due to be held in 2015, though it is unclear how with northeastern Nigeria in chaos. Three states, including Yobe, remain under a state of emergency put in place in May of last year.

“Urgent action must be taken right now to restore a fast-waning public confidence by doing whatever it takes to stop the escalating violence,” Yobe state governor Ibrahim Gaidam said in a statement.

Shehu Sani, a rights activist who has mediated between the government and Boko Haram, described the school attack in Potiskum as “nothing but unmitigated and despicable evil.”

“Nothing can justify the killing of those helpless and harmless children,” Sani wrote on his Facebook page. “May their souls rest in perfect peace.”