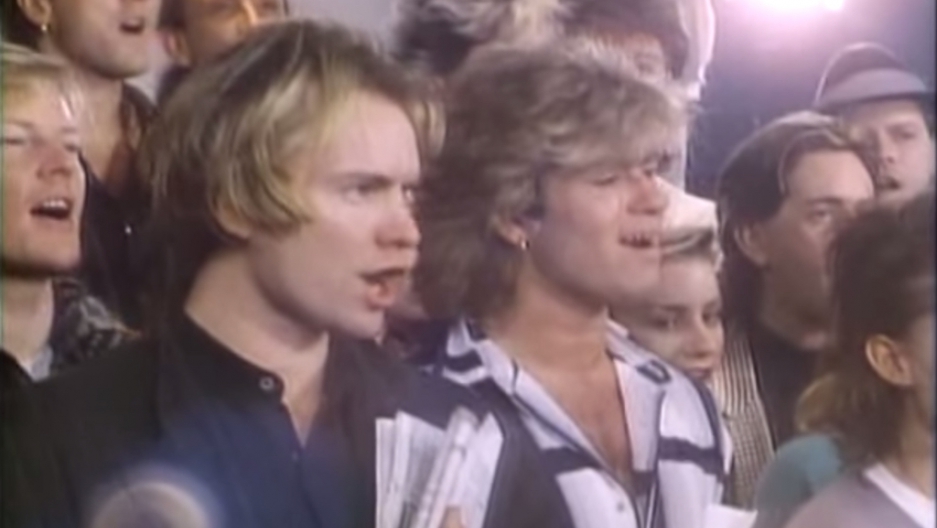 Editor's Note: Band Aid released the new song and its accompanying video on Nov. 17. You can find it here. Judge for yourself whether it's an improvement.

Thirty years ago, the celebrity supergroup Band Aid asked a question that, for some people, still haunts the holiday season — one that lingers as friends and family gather together, roast meats, decorate trees, wear sweaters, and watch streaming video of yule logs.

"Do they know it's Christmas in Africa?"

Are you cringing? You should be cringing. Get those cringe muscles warmed up, because Band Aid is back in the Africa-saving business, and this time it's coming for Ebola.

"Do They Know It's Christmas" is a recipe for how to produce a successful charity song. It combines the following:

1 part — Humanitarian Crisis in a Corner of the African Continent

Put it together and you get this:

The recipe worked so well in 1984 that Band Aid rerecorded the song with some new faces in 2004. It's about to do it again this week, as a team of pop musicions with serious feelings gather on Nov. 15 to record a "retweaked" version that will be less about hunger and more about Ebola.

Some things have changed in the 30 years between then and now, other than the fact that the world has bought several million copies of "Do They Know It's Christmas." Duran Duran won't be singing on the record, for example, and One Direction will. The humanitarian crisis du jour is Ebola in West Africa, rather than famine in Ethiopia.

What hasn't changed is how Band Aid's patronizing, cringe-inducing, eyerolling (although presumably well-meaning) project relies on and perpetuates a set of well-rehearsed and extremely damaging stereotypes that lump the people and nations of the African continent into a single, imaginary "Africa" where nothing ever happens except for disease, conflict, and famine.

Just read the lyrics. They're so outrageously offensive it's almost hard to believe this song happened in real life.

To summarize, there's no water on the entire African continent except for tears (which is news to Toto), nothing grows there, the only bells are clanging chimes of doom, everybody's just happy to be alive, and non-Africans need to feed Africans, feed the world, feed feed feed, etc...

Like all continents, Africa has its share of humanitarian crises, but disease, war, and famine aren't any more unique and endemic to Africa than they are to anywhere else. Africa is a continent with 54 countries, 1.1 billion people, and more than 20 percent of the world's total land area, and without a layer of heavily applied racial stereotyping, "Do they know it's Christmas in Africa" makes about as much sense "Do they know it's Monday in Asia?"

The song is so close to self-parody that it's hard to distinguish it from the many parodies that have since tried to reveal the harmful racial stereotypes behind the earnest musical sentiments.

Take Russell Brand's "African Child," for example. It's a fictional song from his 2010 film, "Get Him to the Greek," in which he plays a washed-up rock star whose career falls apart shortly after releasing a misguided charity song. Like "Do They Know It's Christmas," "African Child" is very racist, very stupid, and very well-meaning. One fictional music critic in the film calls the song "the worst thing to happen to Africa since apartheid."

There's been more biting satire from a Norway-based aid and development group, SAIH, which flipped the script with the charity single, "Africa for Norway."

You'd like to think that we live in a world where the racial stereotypes of "Do They Know It's Christmas" no longer have any traction. But Band Aid's new recording suggests those stereotypes are just as powerful as ever.

It does matter. Before you "buy this thing," think about what vision of "Africa" it's selling.