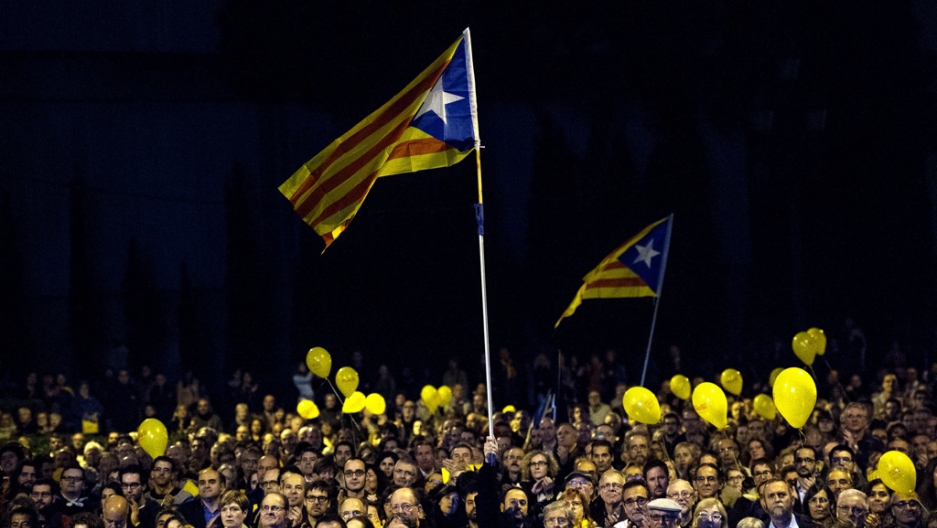 BARCELONA, Spain — How far would you travel to participate in a vote that has no legal standing?

For Miquel Navarro the answer is about 900 miles. The 24-year-old Catalan flew all the way from Dublin, where he studies, to his native city of Barcelona just to take part in Sunday’s poll on independence.

“I had to support my country and vote for freedom,” Navarro said, sporting a badge that declares “Ara Es L’Hora” — “Now is the Time” — in red and yellow, the independent colors of Catalonia.

But Sunday’s poll on Catalan independence was non-binding. It's not even legal. In September, Spain’s constitutional court prevented any real referendum from taking place. Instead, upwards of two million Catalan nationalists were expected to join the volunteer-run “participatory process.”

More from GlobalPost: Catalans are going to need a lot of that famous grit to gain independence

The vote will almost certainly be an overwhelming “yes,” as early results indicated late on Sunday. But on Monday, Catalonia will still be part of Spain. So what would Catalonia have to do to take this independence movement to the next level? Is breaking away from Spain really possible?

The short answer is yes, if Spain rewrites its constitution. Spanish Prime Minister Mariano Rajoy says the constitution as it exists now prohibits a referendum on Catalan independence, since it's illegal for a region to make a decision that would alter the entire Spanish state.

Changes to the constitution are pretty unlikely. Any rewrite would require support from Spain’s two major political parties, both of which have made it clear they don't want Catalan independence.

Who could blame them? Catalonia is the country’s most prosperous and most economically productive region. It accounts for about a quarter of Spain's taxes — far more than its share of Spain's population. Catalonia also contributes way more to the Spanish government's bank account than it gets in return, a disparity that is definitely not lost on Catalans.

Support for independence among Catalans has grown dramatically in recent years, fueled in part by a 2010 constitutional court decision that struck down an earlier law that had given Catalonia partial autonomy. Since that decision, hundreds of thousands — if not millions — have taken to the streets demanding an independence vote.

On Sept. 11, Catalonia’s national holiday, hundreds of thousands of independence supporters converged on Barcelona, forming a huge, human 'V’ for vote. Polls these days suggest around half of Catalans support independence.

But when, or if, Catalans will ever be able to legally cast a ballot on secession remains to be seen.

“It's basically a problem of political will. If the Spanish parties wanted to hold a referendum, they would find the legal way to hold it,” said Laura Pous Trull, a journalist with the Catalan News Agency ACN.

Catalan politicians have tried to find ways around all this. Some legal experts from Catalonia contend that — as it stands — the Spanish constitution could accommodate a referendum on independence. But they admit the constitution would still need to be altered — even if a majority voted to secede — to actually allow for Catalonia to legally break away.

Artur Mas, Catalonia's independence leader, appears undeterred. By his urging, Sunday's non-binding vote will proceed, despite Spain's objections. The ballot will have a two-part question. The first is whether voters want Catalonia to be a state.

The second is whether they want it to be an independent state.