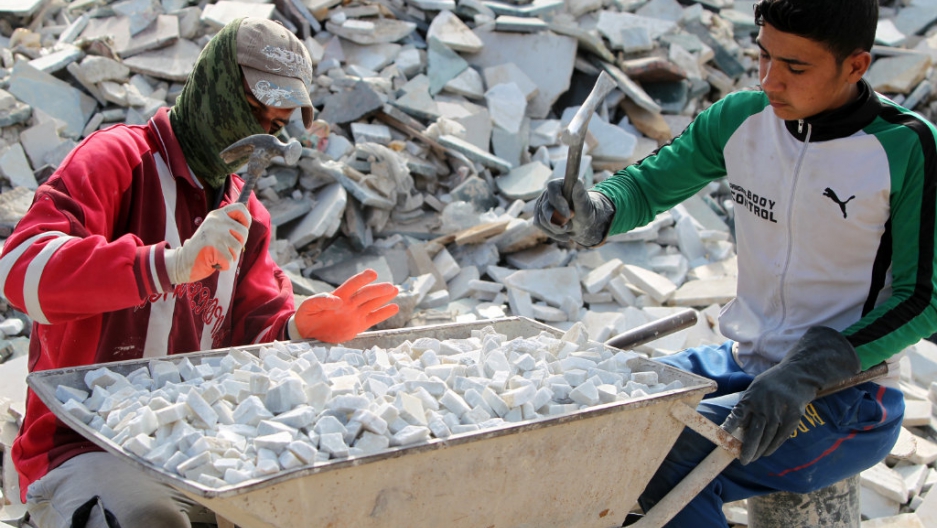 Iraqi workers breaks imported alabaster at a factory in the town of Taji, just north of the capital Baghdad, on Feb. 5, 2013. Unemployment is high across Iraq with employees at this factory earning about $15 for working an 11 hour day. Such conditions make it easier for extremist groups such as the Islamic State to attract young people.
Credit: AHMAD AL-RUBAYE
Share

BELFAST – At a gathering of 14 divided cities from Baghdad to Sarajevo to Kaduna, Nigeria, one consistent theme emerged: rising youth unemployment. Each of the delegations agreed that addressing this issue is the most important challenge for any city struggling to shift away from conflict.

It is true in Baghdad, where a disaffected youth – tired of the lack of opportunity or any hope for a productive future – is descending into despair throughout an increasingly divided Iraq. Out of that despair comes a small but steady stream of recruits from the Sunni population who, tired of the tryanny of a Shia-led government, are drawn to the apocalyptic, dark vision of the movement known as the Islamic State (IS).

It is true in Sarajevo and throughout Bosnia, which has the highest youth unemployment rate at 57 percent, according to World Bank data. There, ethnic tensions still smolder from a conflict that ended two decades ago, and an idle and disillusioned youth is left wondering about its future. An older generation who witnessed the horrors of the war fear that those embers could someday re-ignite hostilities if a better alternative is not presented to young people.

It is true in Kaduna, Nigeria, a city where religious leaders have worked hard to try to heal the divisions between Muslims and Christians. But stemming a tide of violence will only be possible when those leaders can offer a better future to young people through jobs – a distant dream in a country where by some estimates as many as 80 percent of young people are neither employed nor in school.

This rising concern over global youth unemployment was starkly evident at the Forum for Cities in Transition held last week in Belfast. Here, we toured “interface” areas between Protestants and Catholics, places where the lack of opportunity was clearly evident. Even in Protestant areas where Loyalist paramilitary groups have quieted, resentments still run strong and still erupt into flashes of violence.

The Forum for Cities in Transition (FCT) – now in its fifth year – is an initiative of the McCormack Graduate School of Policy and Global Studies at the University of Massachusetts, Boston. The idea behind the gathering is that societies who have endured violent conflict and deep ethnic and religious divisions have much to teach other about the best way to resolve those divisions. It is a philosophy that has been the life work of UMass professor and director of the FCT, Padraig O’Malley.

“All of the delegates here learn from each other,” O’Malley said. “Each of them has something to teach each other about the long, arduous journey they are on in transition from conflict through dialogue and hopefully to non-violence and a belief that they can achieve together what they cannot achieve alone.”

But, he added, the one consistent lesson of this year’s forum is the sense of urgency surrounding the role of youth in improving the futures of their own societies. In order to play a productive part in that process, young people need to be able to work, O’Malley said.

“That really is a starting point for peace and the most effective way to draw young people out of the patterns of conflict: Give them a job,” he said.

At the concluding ceremony in Belfast, O’Malley announced that next year the FCT would come to Boston for its annual gathering and that the role of youth would be a central focus. The cities each committed to adding young people to their delegation to represent the different sides of their societies and to take part in a youth conference, which will take place in advance of the wider forum.

I have known O’Malley for a long time as a legendary and colorful peace activist in my hometown of Boston, and have covered this initiative since its first convening in Boston in 2008 when I was writing for The Boston Globe. That this global conference is coming home to where it started is meaningful and important.

For the team at The GroundTruth Project the Forum’s focus on youth unemployment is particulalry revealing in the aftermath of a year-long reporting project titled “Generation TBD: Despair and Opportunity for Millennials in an Uncertain Global Economy,” which brought together 21 reporting fellows who looked at this issue in 11 different countries.

The series, which was published as a GlobalPost Special Report and picked up by other editorial partners including PRI The World, MSNBC, Huffington Post and WGBH’s Boston Public Radio, culminated in a conference on youth unemployment co-hosted by The GroundTruth Project and International House. The conference, which took place October 24 and 25 at International House in New York, was a convening of thought leaders, politicians and activists concerned about the issue of youth unemployment and a national and global search for solutions to the problem.

When I got back from Belfast, the US was in the throes of the midterm election, where jobs were also the number one issue for young voters. I was struck by the connections between the national and the global debate on this issue.

In America, many pollsters were predicting that millennials would swing away from President Obama, who won in no small measure due to the strong support of young voters in the 2008 and in 2012 presidential elections. At the end of the day, voters under 30 still preferred Democats over Republicans 54 percent to 43 percent, a split that reflected the results of the last midterm in 2010.

So despite all the talk of the “disappointment” with Obama, it looks like young people have not lost all faith in Democrats as the party that can create jobs. Whether Democrats can deliver on that promise or not will give shape to the next presidential election. Resounding Republican victories in this midterm – which gave the GOP a majority in both the House and the Senate – make it clear that if the Democrats want to continue to count on a youth vote, they have much work to do.

The economics of the job equation for young people here and abroad are, of course, linked to the global economy. And there is a great awakening on this issue of youth unemployment as well as a rising urgency to find some solutions.

The GroundTruth Project, which is dedicated to training and mentoring the next generation of correspondent to carry out work that seeks to make a difference, understands the enormity of the challenge in finding the solutions to the problem, and we come away from the two conferences in Belfast and in New York with a strong dedication to covering the story nationally and globally.

A team of GroundTruth reporting fellows at the Bronx Documentary Center, whose work we will publish next week, offer our first effort in our continuing coverage. They put together a series of powerful stories of four young people from the Bronx whose struggles with unemployment and underemployment leave them teetering on despair.

On a larger scale, we are also signing on as a media partner to the Forum for Cities in Transition when it gathers next year in Boston. We plan to build a team of young correspondents here who will cover the issues put forward by the new youth delegates.

Our role is to mentor and train those in the millennial generation, like the outstanding team in the Bronx and the reporting fellows we invite to join us, who want to be journalists. We want to help them develop the skills they will need to tell the story of their own generation as it faces the mix of hope and despair that comes at a time of economic uncertainty.