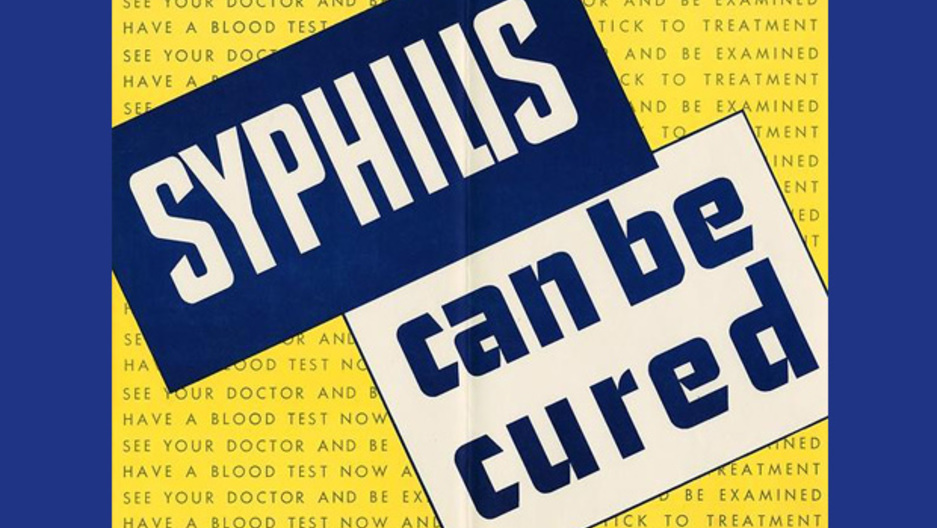 In the 1940s, a tremendous public-health opportunity presented itself, along with a challenge. Mass-produced penicillin was new, and had been used on US troops during World War II. One of the many diseases that suddenly seemed conquerable on the home front was the dreaded STD syphilis. The government "had the medication, it had the ability to get people to get free treatment," says Nancy Guli, a public health scholar retired from the Centers for Disease Control. "But it was dealing with a hush-hush subject, a taboo: syphilis itself. It was as though people felt they could be infected by the word."

So the public health service launched what it called the VD Radio project, recruiting Erik Barnouw, a former radio producer and broadcasting historian, from Columbia University. Barnouw produced documentary-style and dramatic pilots for the project, but they weren't being played in the southern states where syphilis rates were the highest. In a 1970s oral history, Barnouw explained that he turned to folklorist Alan Lomax for guidance:

Alan Lomax said, 'What you need as your spokesman is some of the singers from Nashville, like Roy Acuff and Woody Guthrie.' So he wrote some things in which the narration was sung in a ballad style by one or another of these hillbilly singers.

They weren't exactly hillbillies: Woody Guthrie was from Oklahoma, and Roy Acuff was one of the most powerful men in the music industry. But it was the right idea. Lomax helped Barnouw line up Acuff, Hank Williams, and Sister Rosetta Tharpe, essentially the biggest stars in country and gospel music of their time. The resulting series of 14-minute programs were broadcast all over the country.

Hank Williams sang and narrated "Stars in Her Eyes,"the story of a young couple. Lena moves from the country to the city, gets a job in a factory, meets Joe; but after their marriage, while Joe is away, a friend comes over to visit. "He forgot his place, and she forgot hers," Williams says mournfully. Ten minutes in to a fourteen-minute program, syphilis finally rears its ugly head.

Barnouw's strategy, in other words, was to bury the lead. "He seduced his audience, got them to identify with a character," says Nancy Guli, before revealing the subject. When Lena finally sees the doctor, she's horrified to have to tell Joe the truth, but the doctor scares her with the dangers if she has infected him: insanity, blindness, paralysis.

Sister Rosetta Tharpe's program was structured like a gospel sermon; she sang hymns, played guitar, and told stories about people like Miss Jones, an upstanding churchgoer "who made just one mistake," Tharpe says. "Don't you know that it broke that poor woman's heart to know she gave syphilis to her children before they were born?" She then sings a hymn about how to "get the water that Jesus is giving away," conflating modern medicine with old-time salvation.

The idea of redemption echoes across these programs. They connected a religious idea of repenting for a sin to a modern idea of practical damage control. Miss Jones finds there's still time to get treated; and Joe comes back to Lena, vowing never to discuss her night of infidelity.

The VD Radio Project played on radio stations in the late 1940s and into the early 1950s. Many factors contributed to the decline of syphilis in the postwar years, but "after you've studied all the contributing factors," Nancy Guli says, "I have no doubt that this radio campaign was instrumental in saving thousands of lives." 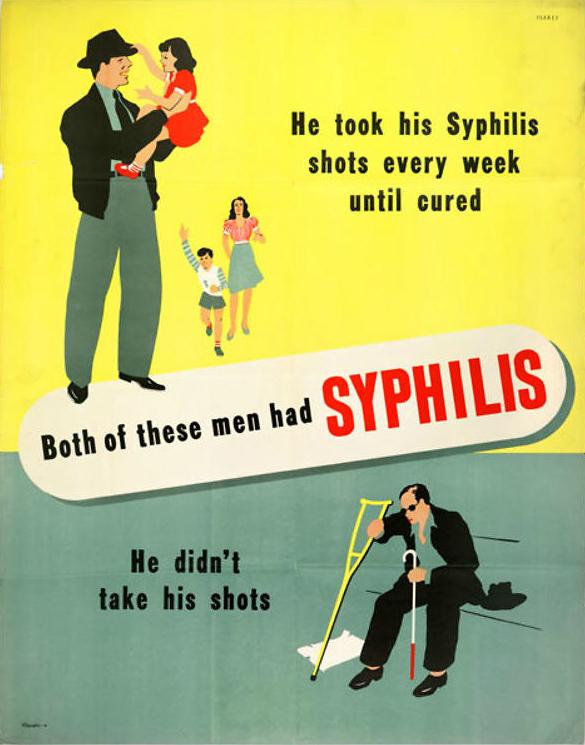 A promotional poster from 1940 urging citizens to seek testing and treatment for syphilis
(Social Welfare History Archives, University of Minnesota)