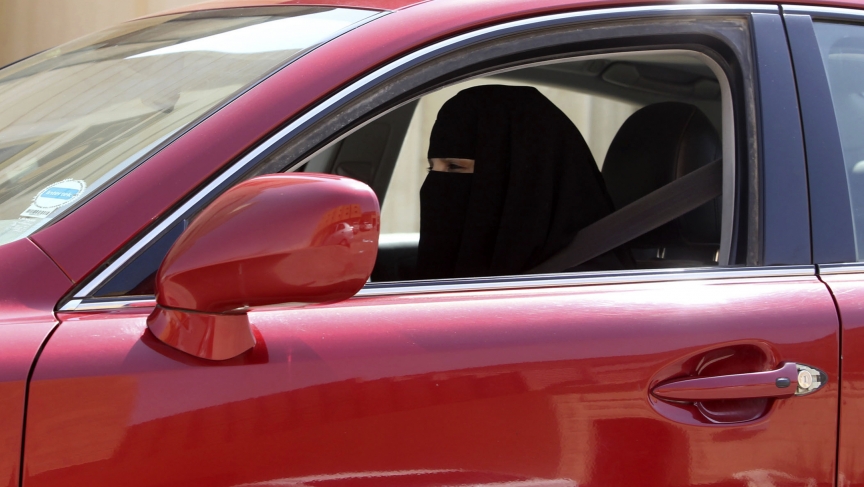 A woman drives a car in Saudi Arabia on October 22, 2013 in violation of the law. Saudi Arabia is the only country in the world where women are barred from driving, but that may soon change.

Saudi Arabia's Shura Council, a group of close advisers to King Abdullah, has recommended that the Islamic country relax its prohibition on women drivers. But the change is likely to come with some curious restrictions.

According to a report from the Associated Press, the council suggested women over 30 be allowed to drive during daylight hours — but only so long as they're not wearing makeup at the time. The women would also need permission from a male relative — say, a husband, father or brother — to do so. Outside of cities, women drivers must be accompanied by a male relative.

Though the council's recommendation is non-binding, it marks a major shift for Saudi Arabia. Despite a number of protests over the past years, the country has resisted all calls to relax its ban and allow women to drive. The 150-member Shura Council only recently allowed female members, all appointed by the king, and now has 30 women in its ranks.

IKEA, the Swedish manufacturer of low-price, build-it-yourself furniture, paid Australia the equivalent of about $27 million in taxes between 2002 and 2013, despite hundreds of millions of dollars in sales. Leaked documents show how IKEA built a tax avoidance scheme — believed to be entirely legal — that stretched across countries and continents.

The Australian publication Financial Review investigated IKEA after receiving leaked information out of the duchy of Luxembourg, which seems to have been central to the scheme.

The International Consortium of Investigative Journalists and the Center for Public Integrity obtained the leaked data and revealed that more than 340 companies have used Luxembourg's lax tax and business laws to shelter profits by shifting them between countries.

In December of 1984, the Union Carbide factory in Bhopal, India, had a catastrophic failure. Forty tons of deadly methyl isocyanate leaked from the plant, killing 4,000 people. Another 15,000 died from health complications in the intervening years. It is one of the worst industrial disasters in modern history — and now it is a Hollywood movie.

"Bhopal: A Prayer for Rain" opened in New York on Friday, with stars like Kal Penn, Mischa Barton and Martin Sheen portraying the story. Penn and Barton play journalists, looking to hold Carbide and its CEO, Sheen, accountable for the disaster. Penn told PRI's The Takeaway that the movie doesn't try to place blame on any one entity or institution, but rather explores how corporate greed, government corruption and weak environmental laws colluded to make such a disaster possible.

In Uganda, the national beauty pageant just wasn't garnering much interest. So Uganda's president, Yoweri Museveni, sent in the army to manage it and increase its relevance to the people. One new requirement — candidates must demonstrate their cow-milking skills.

Agriculture is the backbone of the country's economy and one goal was to make farming a bit more (dare we say it?) sexy. Photos from the contest show beautiful Ugandan women on tractors, with sheep and with cows. The winner, according to Modern Farmer, was Leah Kalanguka, who, in her candidate statement, talked about bringing modern agricultural processes to the country. Kalanguka has a degree in computer engineering, though she did grow up on a mushroom and poultry farm.

Speaking of cows ... there's a new perfume just for them

The disease weakens and can kill cows. Medicine for the cows is costly. Now, PRI's The World reports there is a new product that could protect the cows from infection at low cost. Let's call it eau de antelope.

Researchers know that waterbuck, a type of antelope, don't tend to get bitten by the tsetse fly. There's something about the scent the waterbuck give off. So researchers isolated the scent and now cows can wear a collar, which costs less than $5, impregnated with it. So far, the collars seem to be working. One farmer saved so much in medicine costs, he was able to boost his herd from three to 10 cows.

Earlier this week, we told you about a powerful typhoon near Japan that was lining up to hit Alaska. Well, that storm, Typhoon Nuri, is poised to hit Alaska's Aleutian Islands — and could be one of the most powerful storms ever in the region. "Large waves and hurricane-force winds are expected to be the highest impacts with waves in some areas topping 45 feet Friday night and into Saturday," AccuWeather reports. What's more, the storm could alter the jet stream and inject a blast of arctic air into the US next week.