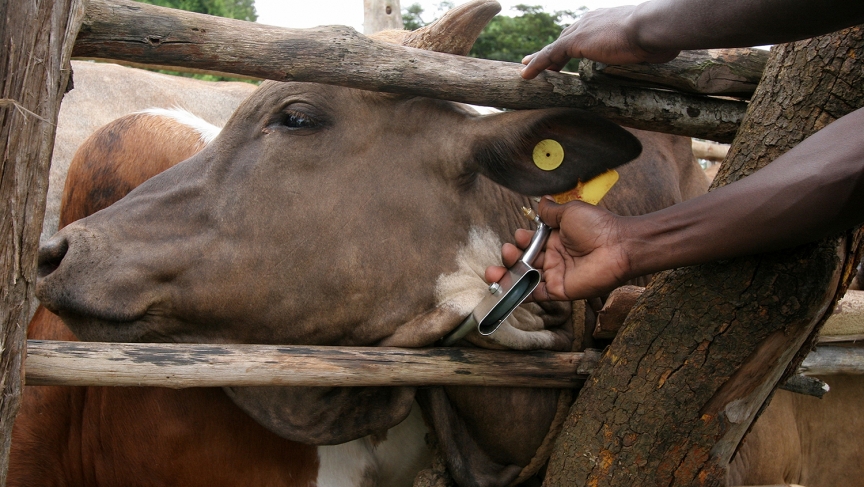 The metal casing suspended from this cow's collar contains a chemical mixture that repels tstse flies.

If you own cows in Africa, chances are you have problems.

Take Pius Mwongela Nzomo, a farmer in the Shimba Hills near Kenya’s southern coast. “You don’t get a maximum return from the cattle you are keeping,” he says. “If you are milking, you don’t get a lot of milk. Personally, I’ve lost around three cattle.”

The culprit behind Nzomo’s weak and scrawny cows — cows that would take the better part of a week to plow a single acre — is the bovine equivalent of sleeping sickness. The disease is called nagana, and it is caused by a parasite that is spread by the tsetse fly.

In humans, the disease causes fever and headaches at first, neurological deterioration later, and will kill you if left untreated. In cows, the illness robs farmers of their livelihood, Nzomo says.

Three million cattle die from nagana across Africa every year, costing the continent several billion dollars. In fact, most of the plowing in Africa is done by people, not cattle.

There was a time when Nzomo couldn't keep more than three cows: He couldn't afford to buy medicine for more if they were bitten by the flies. He would burn charcoal, wood and wet leaves to create clouds of smoke to keep the tsetses away while he plowed and milked.

“It was effective," he says. "As long as the fire is smoking, the tsetse won’t come. But the minute it starts dying down, they come back.”

People have also tried traps, insecticides, and aerial sprays, but the flies are relentless.

Now there may be a solution. 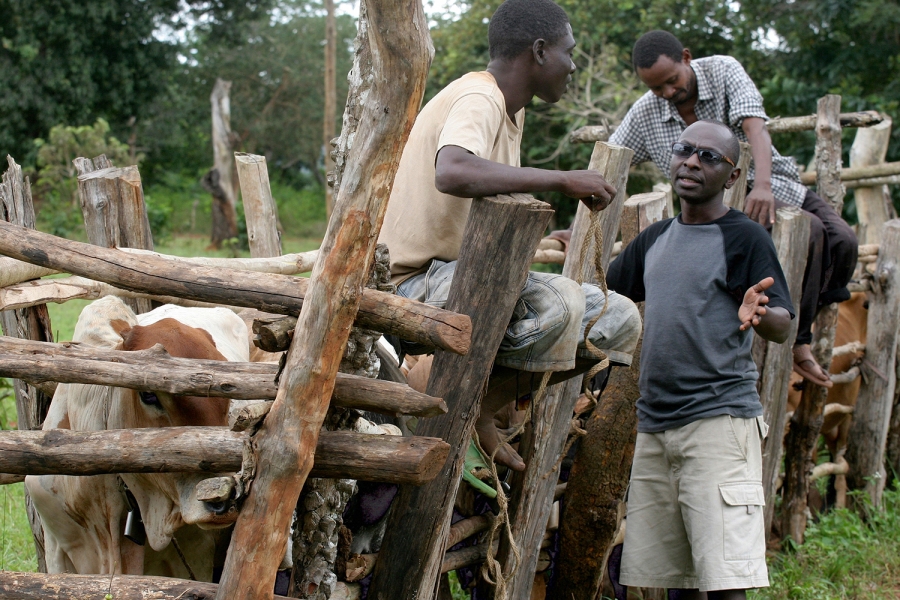 Putting a cow in a costume

Several years ago, Rajinder Saini and his colleagues made a rather simple observation. “Animals like waterbuck [and] zebra, the flies do not like to feed on them,” explains Saini, the principal scientist with the International Centre of Insect Physiology and Ecology. ​

Something about the way those animals smell keeps the flies away. So Saini thought that if his team could identify whatever protected them, they might be able to use it to ward off the flies.

They put a special belt around the bodies of these animals, which extracted the smell and let the scientists analyze it in the lab.

It turns out that zebras don't like being penned in and having belts wrapped around them. “They’ll kick you and everything,” Saini says. “They can be deadly.” That left the waterbucks, a kind of large antelope that, fortunately, didn't mind the belts.

After almost a decade of work, Saini and his team had their answer. “We identified five chemical compounds in the smell of the waterbuck, which make these animals repellent to the flies,” he says.

Saini can mix those chemicals together to create the very brew that keeps the tsetse flies away. As for what it smells like, he hesitates. “[It’s] difficult to describe,” he says. After a moment, he adds, “Well, it’s not, it’s not nasty.”

Unless, of course, you're a tsetse fly — then it's downright repulsive. But the team still had to figure out how to use the chemical blend to protect cows.

The solution they came up with was a collar that fits around a cow’s neck and gradually releases the eau de waterbuck. Now Saini and his team are testing how effective this waterbuck disguise is. Back on the farm in Shimba Hills, Saini’s animal health technician, Peter Muasa, has brought his mobile laboratory straight to the cattle. “We want to confirm the animals are clean from the parasites," he says.

Muasa stands beside a large brown cow inside a pen, a waterbuck-scented collar tied around the animal's neck. The collar costs less than $5.

“Now the blood is coming,” Muasa says, taking a sample. He weighs the cow — 450 pounds, a good number — and spins the blood in a centrifuge. When he looks at it under a microscope, there are no parasites swimming around.

This particular animal was given medicine a couple days earlier, so that's why it has a clean bill of health today. But for most of the 1,500 cows in this trial, their collars are keeping tsetse flies — and nagana —  away. This includes the animals that belong to farmer Nzomo.

Nzomo gets close to a collar dangling from the neck of one of his cows and takes a whiff. “The smell is a little bit pungent so it actually chases away the tsetse,” he says. “Since I’ve started using this collar, the level of milk production is twice what they used to produce before.”

He was skeptical, Nzomo explains, "but when I saw that it works magic, then I actually started spreading the word.”

Nzomo’s animals are plowing more land; he can sell his bulls for more money; and because he is no longer paying for drugs for the animals, he can afford to keep 10 instead of three. Other farmers using the collars have seen similar benefits.

“We are bettering the lives of our families,” Nzomo says.

This success is fueling some ambitious goals. The team wants every cow in Kenya — and maybe the rest of Africa — to have one of these collars. There are also plans to identify the chemical brew that would repel another type of tsetse fly, the one that causes sleeping sickness in people — no smelly necklaces required. A chemical canister could sit outside someone’s home, or be mounted to tourist vans.

The hope is that the mixture could help protect the 70 million Africans potentially at risk of getting sleeping sickness, in the same way the collars protect cows.

Ari's story was produced in collaboration with our partner program NOVA.