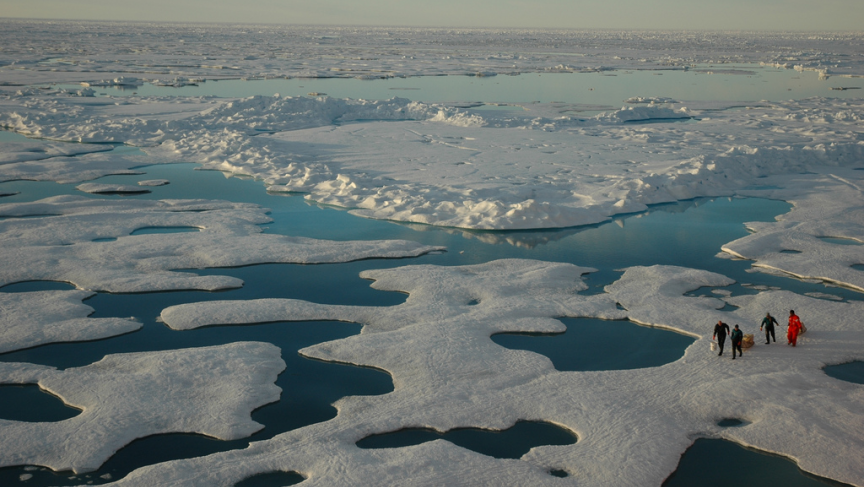 A new study published in Nature Geoscience indicates the increased melting of Arctic sea ice is linked to colder winters in parts of Europe, Asia and North America.

The study looked at a key region of Arctic ice melt in the Barents-Kara Sea, north of Scandinavia and west of Russia. It found that decreasing ice cover in this region doubles the chances of unusually cold winters across wide areas to the south and east.

Jennifer Francis, a research professor at Rutgers University's Institute of Marine and Coastal Sciences, was the first to suggest this link between Arctic ice loss and colder winters. “There's only about half as much sea ice coverage in the Arctic now as there was only 30 years ago,” Francis says. “It's been disappearing at an amazing rate. ... One of those regions where the ice is disappearing the fastest is [in] Barents-Kara Sea.”

Though it seems like an oxymoron that “global warming” leads to colder weather patterns, Francis says the science behind the data makes sense.

In its simplest terms, she says, when sea ice melts, the dark ocean underneath absorbs much more energy from the sun during the summer, which warms the water more than usual. When fall arrives and cold air moves in again, all the energy stored in the water gets released into the atmosphere, which, in turn, causes the air above the water to warm up more than usual. This warming has the effect of pushing the jet stream northward. The jet stream is a fast-moving river of air high in the atmosphere that generates the weather we experience at the Earth's surface.

Last winter, many of us experienced first-hand the result of this change in the jet stream, Francis says: when it is forced northward by warm air near the Arctic, it compensates by bulging southward just downstream of that air. As it swoops down, it allows cold air from the Arctic to plunge farther south along with it.

The resulting severe winter weather, which was dubbed the "polar vortex"  was not, strictly speaking, the polar vortex, Francis points out. The real polar vortex refers to the general circulation of air around the poles — there's a polar vortex in the Arctic and another one around the South Pole. What we experienced was one of those big southward dips in the jet stream caused by warming air in the Arctic, in combination with a big northward swing over California and the Eastern Pacific. Because these waves in the jet stream were so big, Francis says, that pattern became very powerful, which is why it persisted for so long.

Those who don’t support Francis’s view point out that before all the Arctic ice started to melt, some winters were very cold and others were mild, suggesting the observed changes are simply a result of natural variability in weather conditions. Francis says the recent paper incorporated natural variability into its methodology by running a sophisticated computer climate model 100 times.

“Because of natural variability, every one of those computer simulations looks different from each other,” Francis says. “By doing it 100 times, which is something of course we can't do with the real world, they were able to generate statistics that showed the extra cold winters in Asia were twice as likely to occur when they put reduced sea ice in the Barents-Kara Sea, as compared to when there was lots of ice in that area.”

A natural shift in the atmospheric pattern back in the late 1980s caused a lot of ice to blow out of the Arctic and into the North Atlantic Ocean, she explains. Scientists have seen shifts like this before, but this one was unusually strong and lasted several years, so the Arctic lost a lot of ice. Over the last few decades, however, that ice has been thinning due to increasing greenhouse gases, so when it does melt in the summer, as it normally does, more of the sun's energy gets absorbed into the Arctic Ocean, which then contributes to even more melting.

“So we've gotten into this vicious cycle [in which] the more ice we lose the more ice we melt and the warmer it gets in the Arctic — and so we're in the situation now where [the ice] really can't recover.”

“We are changing the climate system in fundamental ways,” Francis concludes. “People need to start realizing that — and realizing that we're not going to turn this thing around unless we can really come to grips with figuring out ways to put less greenhouse gases into the atmosphere.”