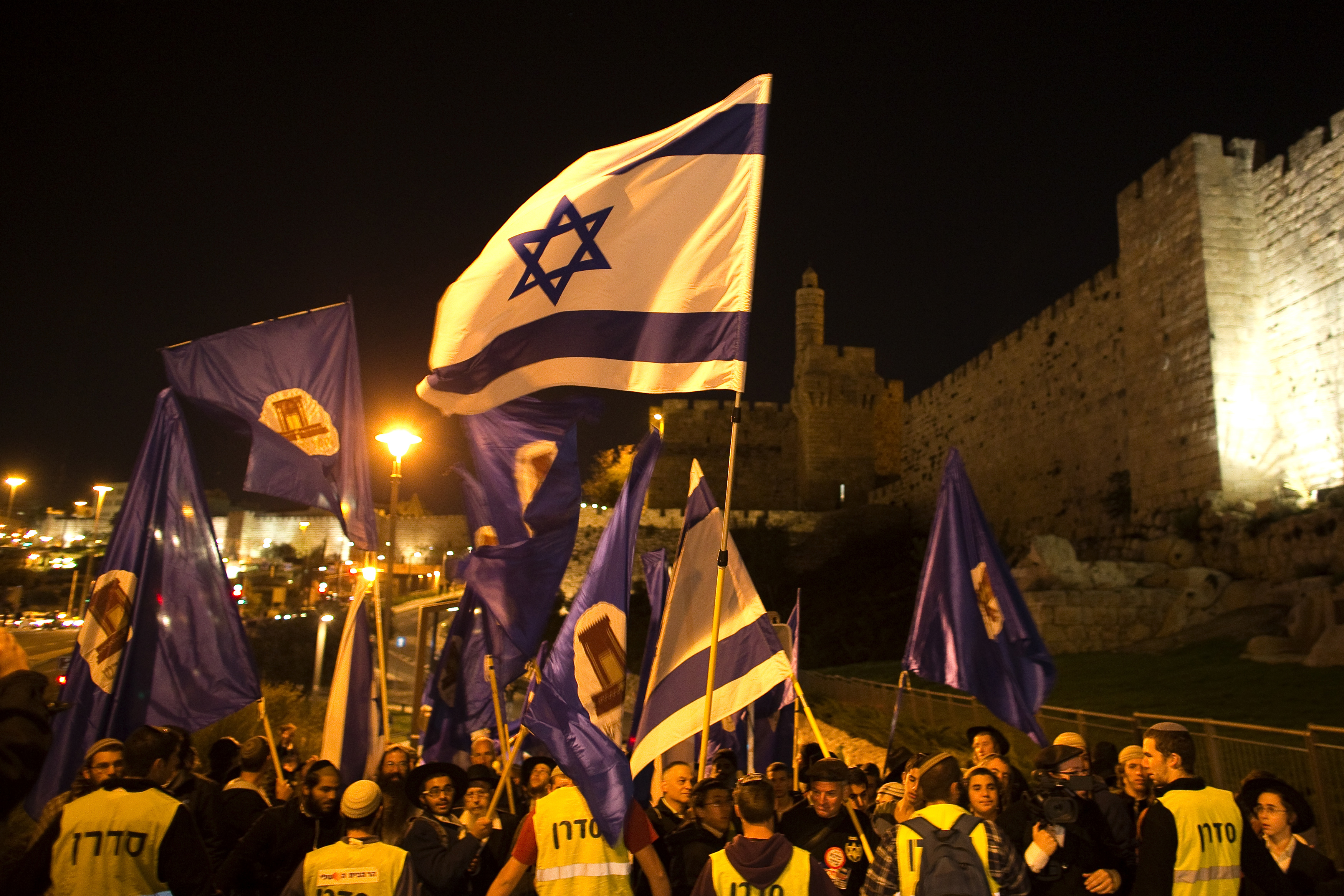 Israeli right-wing activists rallied on Thursday for Jewish prayer rights at the holiest site in Jerusalem, the compound known to Muslims as Noble Sanctuary and to Jews as Temple Mount.

The video footage is grainy but disturbing to watch. It shows a white van speeding into a group of people standing on a Jerusalem sidewalk.

Israeli police say the driver got out and attacked people with a metal bar. When it was all over, one policeman was killed. The driver was shot dead. Another 13 people were injured.

The Islamist militant group Hamas claimed responsibility for Wedenesday’s attack, which came just two weeks after another vehicular attack in the very same section of Jerusalem. That one killed a woman and a baby.

These two incidents stand out against an already troubling backdrop of violent street clashes and rising religious tension in a city that does not get spooked easily.

“Jerusalem is starting to burn,” writes David Horowitz, founding editor of the Times of Israel. “In the absence of constructive Israeli-Palestinian dialogue,” he writes, “the vacuum [has been] filled these past few months by religious agitators and incendiary ideologues.”

Horowitz laments that, “as ever, the solutions are to be found in tolerant education, responsible media, political sensitivity, and wise spiritual leadership. As ever, all of these are in short supply.”

Does it all add up to the start of a third Palestinian intifada? This question comes up often among Middle East watchers. But it is irrelevant and unhelpful, says Matthew Kalman. He’s a journalist and author who’s been reporting from Jerusalem since the late 1990s.

The first prediction of the commencement of a third Palestinian uprising, Kalman says, came way back in 2003. “And people have been predicting the third intifada every two or three weeks since then,” he says. “Which is not to say that it’s not very serious. It is.”

Kalman says Jerusalem has not seen this level of sustained violence for nearly a decade. “We’ve had occasional upticks in the tensions,” he adds, such as during the Israeli military offensive in Gaza this past summer. “Now, in Jerusalem, we’ve had something like four months of very, very high tensions. There are incidents every day.”

The current atmosphere goes back to before the most recent Gaza war, Kalman says. Three Israeli teens were kidnapped in June of this year. Security forces responded by detaining dozens of Palestinians in the West Bank. After the three teens were found dead, Jewish extremists abducted and murdered a Palestinian boy in Jerusalem. Since then, Arab neighborhoods in the holy city have been regular scenes of street clashes between Israeli police and Palestinian youth.

In recent weeks, Jerusalem’s holiest site has once again become a flashpoint in the conflict. The Temple Mount for Jews is known by Muslims as al-Haram al-Sharif, where al-Aqsa mosque is located. Palestinian officials have responded to visits by Jews to the site by calling on the public to “protect al-Aqsa.”

“Jewish activists have responded by stepping up their pressure to do more on the Temple Mount,” Kalman says. “All of this came to a head last week, with the shooting of Yehuda Glick.”

Glick is a prominent advocate for allowing Jewish prayer on the Temple Mount, which is prohibited by Israeli authorities. He was shot in a rare assassination attempt by a Palestinian assailant in Jerusalem. Glick is currently showing signs of recovery after being listed in serious condition. Since the shooting, protests and clashes with police in Palestinian parts of the city, including at the al-Aqsa mosque compound itself, have escalated.

There are people on both sides of this conflict who seem determined to raise tensions, Kalman says. “But you have this large, silent majority,” he adds. “The polls always show something like 60 to 70 percent on each side who really want there to be a compromise.”

Problem is, such sentiments do not come out, Kalman says, either in the political rhetoric or in the fighting that’s taking place on the streets of Jerusalem. “I remain very pessimistic,” he says, at least for the short term.

The wishes of the majority for peace, Kalman concludes, will probably require a change of leadership on both sides. It’s going to take “a new generation coming along and saying, ‘We’ve had enough. Let’s try and live together. Let’s try and compromise.’ I don’t see that happening with the current leaders on each side.”