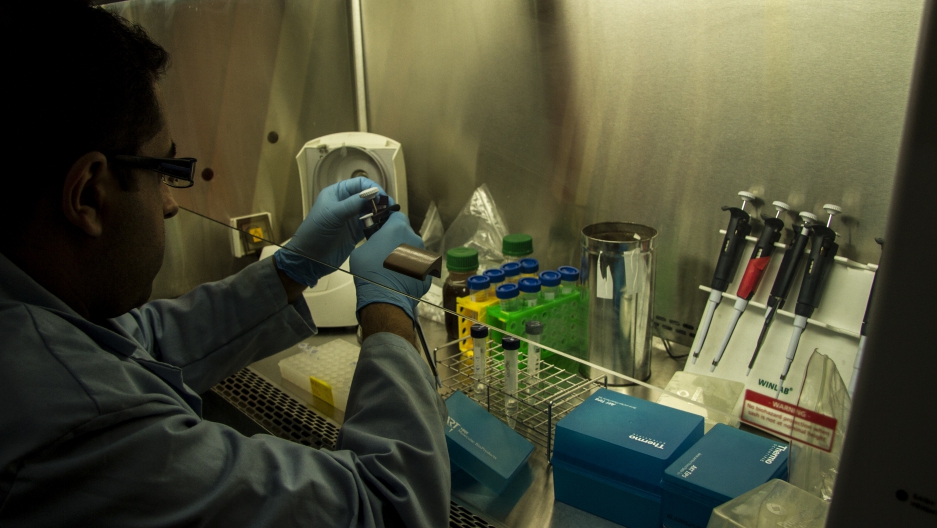 A technician at Baghdad's main forensics laboratory in Al-Wal military base analyses a set of samples. It is here where all the evidence gathered from car bomb blast sites is sent and where DNA samples from unidentified bodies are analyzed.
Credit: Susannah George
Share

Editor's note: This story was originally published on Nov. 6, 2014.

BAGHDAD, Iraq — The main forensics office in Baghdad consists of four small rooms lit by fluorescent lights. Just a handful of employees sit quietly at computers inputting data, or with trays of test tubes in front of them, analyzing samples.

Contained within the Al-Wal military base east of the city, it is here where fragments from the almost daily car bombs are sent and where DNA samples from unidentified bodies are analyzed.

A year ago, the main business of the lab was paternity tests. These days, the head of forensics in the Iraqi capital explains, terrorism cases take up most of his time.

“As you know the attacks have increased dramatically and we have to gather evidence from each attack, each victim and each suicide bomber,” says General Talib Khalil.

The general is interrupted twice during our interview by phone calls reporting bombings in the city and requesting his approval to dispatch teams to the sites.

While television shows about crime scene investigations have become a staple in the United States, DNA forensics is a relatively new technology in Iraq, introduced when sanctions were lifted after the fall of Saddam Hussein. It was heralded as a keystone of Western training programs for Iraq’s new rule of law, and a boon for the country’s medical and scientific communities.

“My men, they know their jobs,” General Khalil said after getting off the phone with a team dispatched to a blast scene. “They're on their way right now to gather fingerprints and evidence, this is how we fight terrorism.”

General Khalil, a government appointee, paints a rosy picture of forensics in Iraq, claiming that his technicians get all the funding and resources they need from the central government and a series of foreign contracts from the United States, Britain, Australia and Canada.

“All the equipment in our labs is modern,” the General explains. “We are perfectly able to do our job with what we have.”

But Western officials with firsthand knowledge of the Iraqi program, under the auspices of the Iraqi government, say forensic capabilities — underfunded, understaffed and overburdened — have been left to languish just as the country is being hit with a fresh wave of violence.

The UN says that during the month of October violence killed 1,273 people across Iraq, excluding Anbar province from which the organization says it no longer has access to credible information. That number is up slightly from the previous month's death toll which was one of the highest this year.

The current wave of violence was set off by a crackdown by security forces on a Sunni protest camp in April this year. Since then, the Islamic State's takeover of large parts of northern Iraq has contributed to instability in the country.

General Khalil’s DNA lab was set up in a frantic rush just before US troops withdrew at the end of 2011. After a car bomb largely destroyed Baghdad’s main lab in Karada in 2010, killing four staff members, equipment, supplies and remaining staff were squeezed into previously unused office space adjacent to a base then known then as Camp Loyalty. That's where it still stands today.

“We just had it up and running,” says a former Western forensics trainer, speaking on condition of anonymity, “but we still had a lot of issues with electricity and water.”

Like the rest of Baghdad, the lab wasn’t connected to a reliable power supply. The disconnected moments between the switch from the city grid to generator power could destroy delicate DNA samples.

In the three years since then, little has changed at the lab. The vast majority of the equipment dates back to the US training program, and the technicians all received their training abroad.

An internal audit of the UK’s forensics program in Iraq obtained by GlobalPost details tens of millions of dollars spent on training, despite multiple instances of last-minute bureaucratic delays that prevented scientists from attending workshops.

At Al-Wal military base, a technician in Baghdad's main forensics lab prepares to sift through evidence collected from a recent car bomb attack.

Across town, at Baghdad’s central morgue, officials confirm a dramatic increase in the number of unidentified bodies the facility receives. Many of them remain unidentified for months as the forensics lab struggles to work through a backlog of cases. Of the dozens of corpses it receives every day, one official estimates that nearly a third go unidentified.

“We let the body stay here for 15 days,” says the official, who is not authorized to speak to the press and did so on condition of anonymity. “Then if no one claims it, we take DNA samples and send the body to be buried in Najaf,” he adds, referring to Iraq’s largest graveyard.

But even when a family does come forward in search of a lost loved one, he says, it can take up to four months for them to get results. The spike in violence has created a corresponding demand for DNA testing.

“It’s just too big of a job,” says one Western official with firsthand knowledge of Iraq’s forensics program.

The wave of violence Iraq is dealing with, the official says, would have overwhelmed nearly any other country as well.

“There are only two countries in NATO who are capable of properly exploiting car bomb sites, the US and the UK.”

The official says a key weakness of the Western forensics training program in Iraq is the lack of a long-term strategy. While forensics labs have been built and the first wave of technicians trained, he says, the profession is still not taught in any of Iraq’s universities.

“In Iraq’s forensics program, nobody rises up to a certain level, they’re all appointed,” the official adds, referring to a practice common at all levels of Iraq’s government: officials are appointed to run ministries and programs based on loyalty rather than competence.

But the core problem hampering the country’s forensics program going forward is the legal system.

“The fundamental flaw is there is no place for forensic evidence as a primary piece of evidence in Iraq’s courts,” the Western official says, explaining that in criminal cases forensic evidence may only be introduced to support eyewitness testimony.

Reflecting on how Iraqi security personnel respond to car bomb attacks, one Western security official in Baghdad laments how little has changed. Despite years of training to do otherwise, blast sites are often hosed down immediately following a car bomb attack before forensics teams have a chance to gain access and collect material.

“It’s all part of this effort to make everything look OK as quickly as possible,” he says.

Forensics is a key component of Iraq's ability to implement the rule of law, explains the Western official who has direct knowledge of the country's program. Without it, Iraq is less able to stem violence and end conflict.

“In the long term it hampers the ability to collect evidence and, perhaps more importantly, to bring people to justice.”