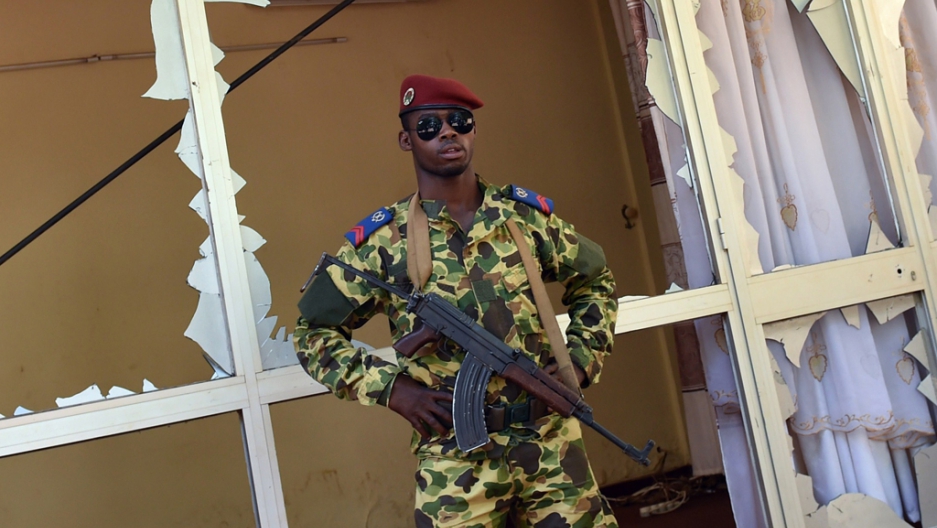 A Burkinese soldier stands guard outside the national television headquarters after gunshots were fired around the premises in Ouagadougou on Nov. 2, 2014.
Credit: ISSOUF SANOGO
Share

NAIROBI, Kenya — Popular protests last week forced out the man who had run the landlocked West African nation of Burkina Faso for the last 27 years, since taking power in a military coup.

But one military ruler was immediately replaced with another as the army stepped in to keep order after days of angry and destructive demonstrations.

Now domestic, regional and international pressure is on for a swift transfer of power into civilian hands.

This may be the first time you've noticed so much international attention on this small West African country, however. Here’s what you need to know about the Burkina Faso people’s revolution and why it's had such wide resonance.

Why is Burkina Faso’s revolution such a big deal?

Because sub-Saharan Africa never got its "Arab Spring." Because so many African leaders take power dressed in a military uniform and then cling to it for decades. Because with every passing year Africa’s aging leaders become less representative of its youthful population. Because the (relatively) peaceful toppling of an entrenched government at the hands of civilian demonstrators is something almost unheard of on the continent. It’s also important beyond Burkina Faso’s borders: during his rule the ousted President Blaise Compaoré positioned himself as a key ally of Europe and the US (most recently in the fight against Islamist militants in the Sahel — the US has drones and France has special forces in the country). He was also a go-to man in West Africa for former colonial power France, a powerbroker who both stoked and put out fires around the region.

Why was the president kicked out?

The final straw for the hundreds of thousands of protesters who took to the streets last week was Compaoré’s bid to change the constitution to allow himself to stay in power. He had already ruled for 27 years since seizing power in a coup in which his former friend and left-wing revolutionary Thomas Sankara was killed. (Compaoré has always denied that the soldiers who killed Sankara were under his command but he may find himself having to prove his claimed innocence in court.) Compaoré’s reign was notable for its corruption and for failing to improve conditions for impoverished people.

Who is in charge now?

The military was quick to hijack the people’s revolution. Military chief Gen. Honoré Traoré, an ally of ousted president Compaoré, was the first to stake his claim but was quickly slapped down by Lt. Col. Isaac Zida, deputy commander of the presidential guard who is, for now, in charge. Zida says he has no intention of holding onto power but demonstrators, opposition leaders and outside observers are justifiably skeptical. The African Union has given the army two weeks to hand power to an interim civilian-led administration or face sanctions. Regional heads of state were in the capital Ouagadougou for talks on Wednesday.

What’s next for the ex-leader?

Compaoré fled to neighboring Ivory Coast in a 33-car convoy, carrying his family and close associates and, one can safely assume, a lot of cash: after all Compaoré has become accustomed to a degree of luxury during his 27-year rule. Compaoré’s choice of bolthole suggests that he does not think it’s all over for him, yet. Rather than fleeing to Europe or a friendly nation far from home he chose to stay in the region. He may believe that, as in the past, there is still a way back, or at least a way for him to continue to influence events back home.