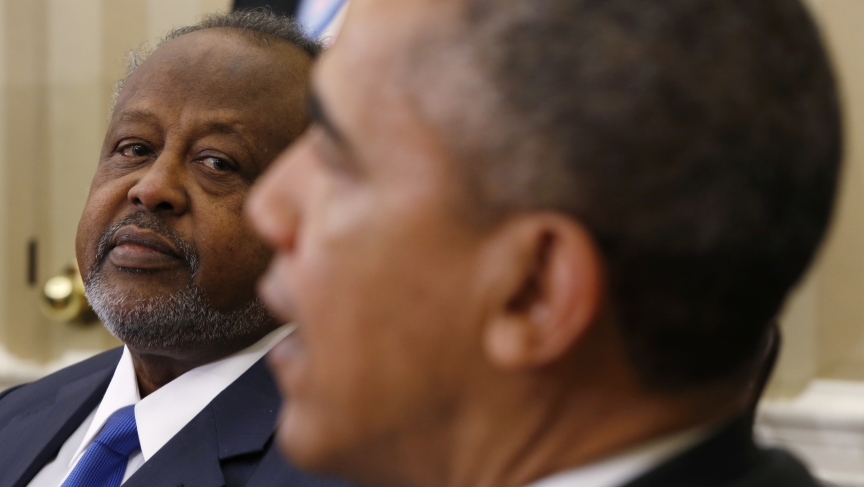 U.S. President Barack Obama meets with President Ismaïl Omar Guelleh of Djibouti on May 5, 2014. Some Djiboutians say American ties to their country are holding back democratization.

A few days after protesters in Burkina Faso forced President Blaise Compaoré from office, youth in another African country are using the example to push for the resignation of another long-standing ruler.

Ismaïl Omar Guelleh, Djibouti's strongman leader, has run the former French colony in East Africa since 1999 — when his uncle stepped down after 22 years in power. Guellah last renewed his mandate in 2011 after winning passage of a consititutional change that let him run for a third term, the same tactic that prompted the anti-Compaoré protests in Burkina Faso.

That decision sparked major protests in the run-up to the 2011 election, and Djibouti's youth have now reignited that movement. The Opposition Youth Movement — also know as the MJO, its French acronym — also marched through the streets of Djibouti City on Monday to demand transparent democratic elections.

Djiboutian blogger Houssein Ibrahim Houmed also wrote about the links between the events in Burkina Faso and his country:

As seen from Djibouti, I can say with certainty that the members and supporters of Uguta-Toosa (Djibouti) political party support the just struggle of the people of Burkina Faso. I invite the coalition USN (National Union for Salvation) of the Djiboutian opposition to express their unwavering solidarity with the resistance waged against the dictatorship Burkinabe Blaise Compaoré.

Protesters captured video of Monday's demonstrations in the capital:

Guelleh's regime is well known for its disregard for democracy. Freedom House, a human rights watchdog organizations, says that while Djibouti holds elections, "the ruling UMP coalition party has effectively usurped the state."

The government also banned all demonstrations and arrested peaceful protesters and opposition leaders ahead of the 2011 presidential vote, according to Human Rights Watch.

The struggle for more democracy in Djibouti also faces challenges from overseas. The emphasis on fighting terrorism in the region has enabled the rulers of Djibouti, as well as Ethiopia, Eritrea and Somalia, to generously benefit from US aid without much of the usual democratic requirements.

And the potential for economic growth in the region has also let Guelleh solidify his position in the international community. Malik Ibrahim, an expert on the Horn of Africa region, explained how Guelleh uses his international network to strengthen his leadership:

Americans, French, Germans, Chinese, Russians and even the Japanese have been vying for influence within the country’s government. As a result, Djibouti’s main source of income comes from the rents it charges its Western partners for the military facilities it hosts. While the exact sums are unclear, the U.S. pays some $60 million a year, while the French and the Japanese both contribute some $30 million. Most recently, the Djiboutian government signed a security and strategic defense partnership with China. Djibouti is offering China military facilities in exchange for training of their military forces

However, things can change quickly as the Burkina Faso events have shown. Blogger Houssein Ibrahim Houmed, again, offered his hopes for the country:

The end of the Guelleh regime will be effective and consumed only when the rule of law is firmly established in the Republic of Djibouti. I hope that the United States of America, Japan and France will favor the advent of democracy here and that they will not condone an extension of the reign of this heinous clan.

This story by Lova Rakotomalala was originally published by our partner Global Voices Online, a community of bloggers from around the world.