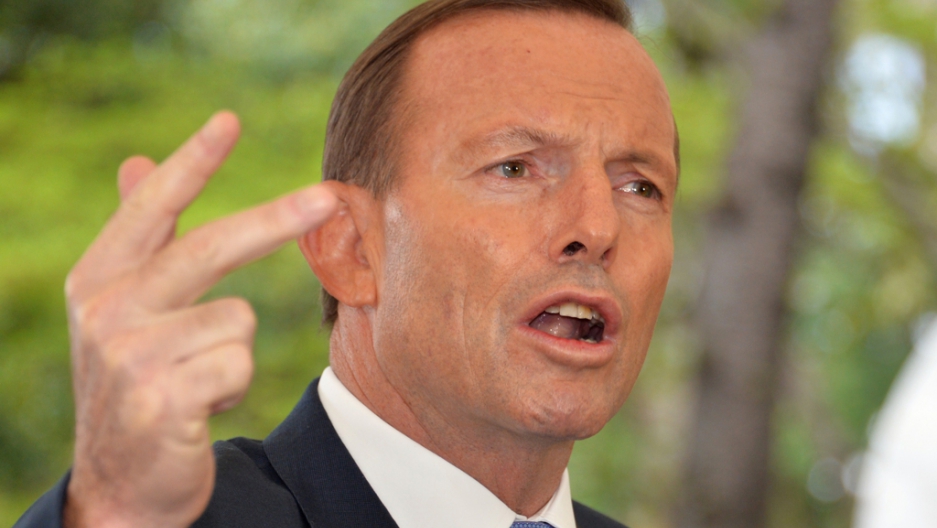 Australian Prime Minister Tony Abbott delivers a speech at a reception at the Australian embassy in Tokyo on April 6, 2014. Abbott is on a four-day visit to Tokyo where he will meet with his Japanese counterpart Shinzo Abe. AFP PHOTO / Yoshikazu TSUNO (Photo credit should read RIE ISHII/AFP/Getty Images)
Credit: RIE ISHII
Share

The coal industry has never had a better friend than Australian Prime Minister Tony Abbott.

The ink was barely dry on the latest UN report warning the planet was doomed unless governments took urgent action to reduce greenhouse gas emissions, when Abbott once again came out in defense of the indefensible: carbon-belching coal.

“For the foreseeable future coal is the foundation of our prosperity. Coal is the foundation of the way we live because you can’t have a modern lifestyle without energy,” Abbott said Tuesday, two days after the UN's Intergovernmental Panel on Climate Change published its fifth and final report on global warming ahead of next year’s meeting to thrash out a new global climate agreement.

If you think those comments were made up by the Onion, check out this video. They are, as they say Down Under, fair dinkum.

Abbott must have known that his remarks totally contradicted the findings of the IPCC report, which warned greenhouse gas emissions were at the highest level in 800,000 years and must be reduced to near zero by 2100 if global warming is to be kept below 2 degrees Celsius.

If temperatures rise more than that, the report said, we can expect "severe, pervasive and irreversible" damage. And those at the greatest risk are the poor.

“Climate change will amplify existing risks and create new risks for natural and human systems. Risks are unevenly distributed and are generally greater for disadvantaged people and communities in countries at all levels of development,” it said.

Read what else the report had to say here.

But such dire warnings clearly mean little to Abbott, who has demonstrated time and time again that the interests of big business always come before protecting the environment.

Just last month Abbott said coal was “good for humanity” at the opening of a coal mine in the northeastern state of Queensland.

Here's a look back at some of the other outrageous things Abbott has done to the environment since he was elected to the top job in September 2013.