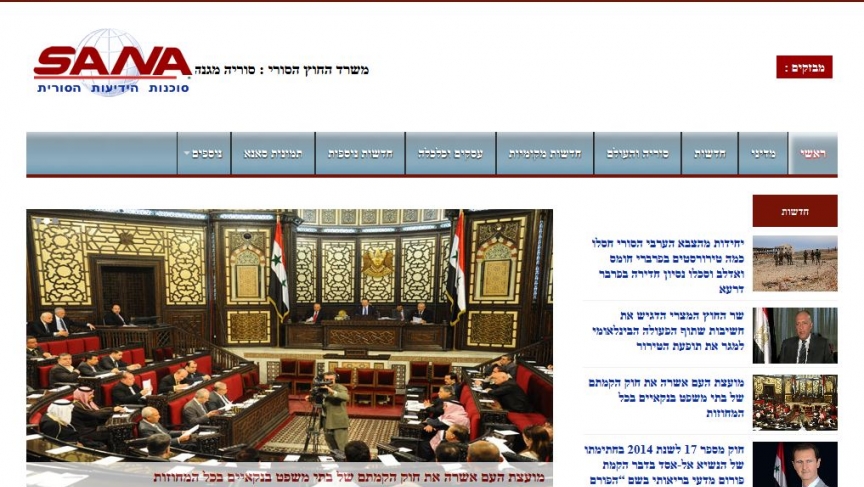 We may not have heard much lately from Syrian President Bashar al-Assad, but that doesn't mean his regime is staying silent. Now it's even courting a longtime enemy.

The Syria's state news organization, the Syrian Arab News Agency, puts out the government's message on TV and online, where its website runs news in eight languages. One of those language is Hebrew — of a sort.

Tsurkov has some experience with nit-picking the Hebrew of Israel's adversaries: She gained some fame over the summer when she tweeted at Hamas during the war in Gaza, correcting the grammar the group used in a series of Hebrew text messages it sent to frighten Israelis.

So far, the Syrian government isn't being as threatening in its Hebrew-language offering. "I think it's motivated by the idea that Israel has a great influence over the US," Tsurkov says. "Therefore there's a reason to talk to the Israeli public, who they see as highly influential."

But the SANA website probably isn't winning any converts. Israelis may be able to read the articles, but the stories retain the Assad regime's anti-Israel spin. SANA refers to the Israeli army as the "Israeli occupation force."

As long as the writing and language remain as it is, Tsurkov doubts the website will have the intended effect.

"I think Israelis may read it to joke about it because of all the mistakes," she says "I think it's very, very interesting that they're prioritizing this, considering the financial constraints. I mean I wouldn't prioritze propaganda to Israelis over feeding your own people, but I'm not a dictator."