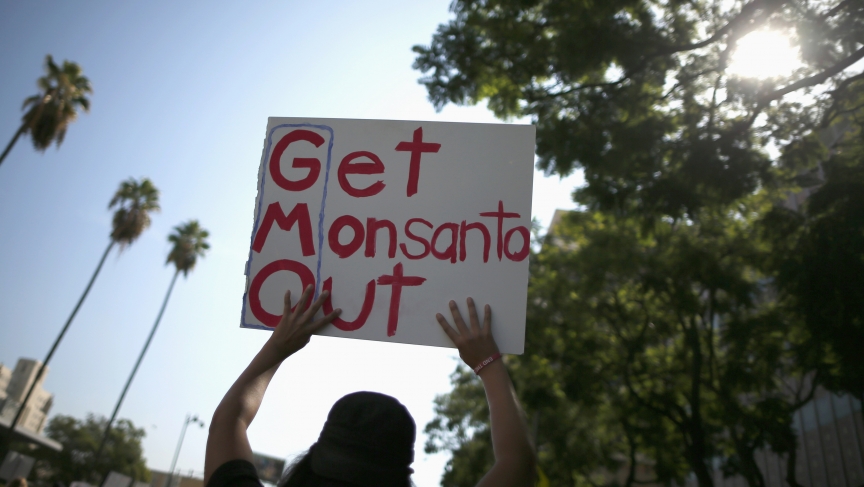 People hold signs during one of many worldwide "March Against Monsanto" protests against Genetically Modified Organisms (GMOs) and agro-chemicals, in Los Angeles on October 12, 2013.

Will GMOs destroy or save civilization?

The headlines might paint a dramatic picture, but the reality is that GMOs — and the discussion around them — are more nuanced than many of us assume. And that starts with the term “genetically modified organism" itself.

“One of the issues that’s inhibiting the advancement of the discussion is this term ‘GMOs,’ because it’s scientifically meaningless,” says Dr. Pamela Ronald, a professor in UC Davis' Department of Plant Pathology and the co-author of "Tomorrow's Table: Organic Farming, Genetics, and the Future of Food."

Each crop really has to be looked at on a case-by-case basis. There's golden rice, which is engineered to produce higher amounts of beta carotenoids in order save the lives of young children in less developed countries. That's neither related nor comparable to herbicide-tolerant crops or even insect-resistant corn.

There’s also an “echo chamber of misinformation” that’s fed by social media, says Amy Harmon, a New York Times reporter who's written on the topic. She thinks that's partly because people want something they can focus on as concern about sustainable agriculture grows

“Something that sounds scary, like genetically engineering your food in a laboratory, seems like a good target," Harmon says. "It would be nice if the solution was that easy."

Harmon and Ronald also point out that humans have been modifying their food for centuries. Kids learn fairly early in school about Mendel's experiments with plant hybridization. But would Mendel recognize the work that’s happening in modern labs?

Harmon says there is a difference in what scientists are doing with plant genetics today. Instead of combining lots of genes in a somewhat random process, then seeing which one looks good — which is cross-breeding in its traditional sense — scientists are taking specific, known genes and putting them in plants to produce a particular desired trait.

But targeting specific genes can have advantages. For example, a citrus disease has been crippling Florida's orange crop. It's caused by a bacteria carried around by insects, so farmers have been increasing the amounts of insecticide used on the crops — potentially causing harm to workers and consumers.

One company is currently working on a genetically-engineered orange that would be resistant to the disease. “If it works, it would clearly reduce the use of pesticides and it would just make the crop viable,” Harmon says.

“My concern is that we will reject a tool that could help,” Harmon says. “If there’s a tool that’s not intrinsically dangerous, and that could yield more nutritious foods and we rejected that just based on fears and misperceptions of the technology, it would be a really tragic thing.”

This story was first published as a blog post from PRI's Innovation Hub with Kara Miller.