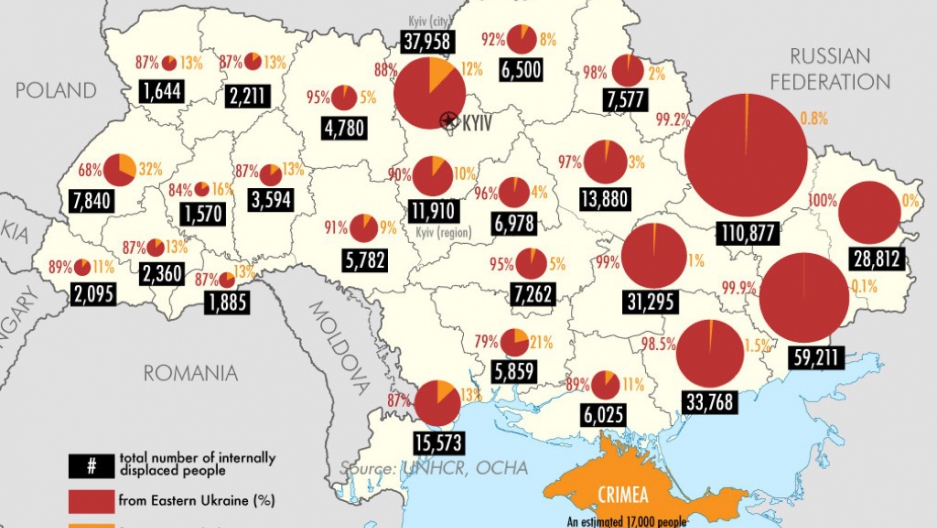 If you thought the ballot box would heal Ukraine, you were wrong, at least for now.

The past week has been election season for the troubled nation. On Oct. 26, the central Ukrainian government held parliamentary elections in which voters emphatically rejected radical candidates from both the left and right in favor of pro-Western moderates. Not to be outdone, on Nov. 2, pro-Russian separatists in eastern Ukraine held their own elections in the self-declared "people's republics" of Donetsk and Luhansk. Western governments and Kyiv denounced the election, noting that it violated the Sept. 5 ceasefire agreement and warning Russia to stay out of it. Russia responded by voicing support for Donetsk and Luhansk, but stopped short of fully recognizing the regions as independent.

One question is: What will these elections mean for the hundreds and thousands of Ukrainians who've been displaced by conflict?

At the beginning of September, the United Nations Office for the Coordination of Humanitarian Affairs (OCHA)  estimated that 260,000 people had been displaced within Ukraine by Russia's annexation of Crimea and by the fighting in eastern Ukraine. (These GIFs show how that number grew over the summer.)

Now, OCHA says the number of internally displaced persons is much higher: 430,000. (That's roughly the population of Raleigh, North Carolina.) Coordinating the effort to relocate that many people has been difficult, to say the least. According to OCHA, 5.2 million Ukrainians live in areas affected by conflict, and OCHA expects more of them to become internally displaced as fighting continues.

The chart below shows you where those 430,059 IDPs now reside in Ukraine: Caring for Ukrainian refugees isn't just a national issue. Many Ukrainians have looked to neighboring countries for safe haven. The highest number of externally displaced people reside in Russia. According to OCHA, "most have left with few belongings and are in need of shelter, food and non-food assistance, placing pressure on neighboring nations." The Ukrainian Parliament recently adopted a new law that OCHA hopes will make the process of identifying and assisting internally displaced people in Ukraine easier. It's a complicated process for many reasons, OCHA says:

Unfortunately, the current procedure is paper-based, leading to lack of efficiency, possible duplication, long lines and delays. UN monitoring indicates that one administrator can register an average of only 16 people per day and applicants must wait in two different lines to register and receive financial aid. The international community continues to lobby for web-based registration in Kyiv and the regions to ensure effective response nation-wide.

The country is also facing a serious medical crisis. OCHA reports that, "Ukraine's pharmaceutical supply is on the verge of collapse with almost no medicines available." The Ministry of Health in Ukraine has called for UN support to replenish vital medicines for tuberculosis, HIV, diabetes and other diseases.