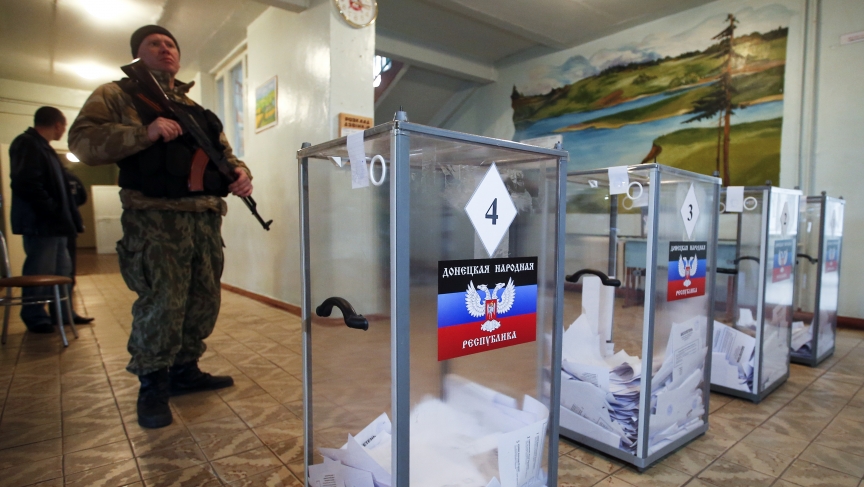 “It wasn’t a real ballot. It was a fake election with bogus electoral papers.” That’s the verdict of the BBC's Olexei Solohubenko on the balloting that took place in two regions of eastern Ukraine Sunday.

The election saw Alexander Zakharchenko chosen as the president of the Donetsk People's Republic, a self-proclaimed pro-Moscow breakaway state in eastern Ukraine. It came just a week after Ukrainians elected a strongly pro-Europe parliament, though the disputed east largely boycotted the vote.

“Moscow is happy,” says Solohubenko of the vote, but Russia stopped short of offering full recognition for the two nascent republics. “They say they respect the will of the people, but they do not explicitly recognize the independence of these two republics: the Donetsk People’s Republic and the Lugansk People’s Republic.”

“In a sense they’re saying there has been a vote; it’s something we acknowledge ... and now Kiev has to negotiate with the leaders, who have this stamp of legitimacy," Solohubenko explains.

Even that sliver of legitimacy is very much in dispute. The US and Europe denounced the vote as illegitimate; Petro Poroshenko, Ukraine's president, called it a "farce" that violates last month's ceasefire deal between Russia and Ukraine.

But Solohubenko says that even if the ballot‘s legitimacy is in question, there’s no doubt it's still significant. It could create another “frozen conflict” on Russia’s borders, much like the existence of pro-Russian enclaves in Georgia and Moldova. And it could get a whole lot worse: “It creates a potential bridgehead for greater Russian involvement with the pro-Russian forces there," Solohubenko says. "It’s very, very dangerous.”

The authorities in Kiev understand how weak they are militarily and Russia has shown it’s not afraid to use force to prop up the separatists. As if to drive home that point, there are reports of major troop movements in southern Russia and eastern Ukraine.

“This military presence on the ground creates this very, very difficult situation for the Ukrainian authorities," Solohubenko says. "Politically, they want to negotiate. But they’re negotiating from a position of weakness, not strength.”

Now that the vote is complete, Solohubenko thinks events could move quickly.

“One of the leaders of the Lugansk People’s Republic already told Russian TV Monday that it’s only a matter of time till they join Russia," he says. "I think the masks are off, and I think very, very soon we’ll have the announcements from the leaders of the two rebel areas saying they want to join Russia — as happened in Crimea earlier in the year.”