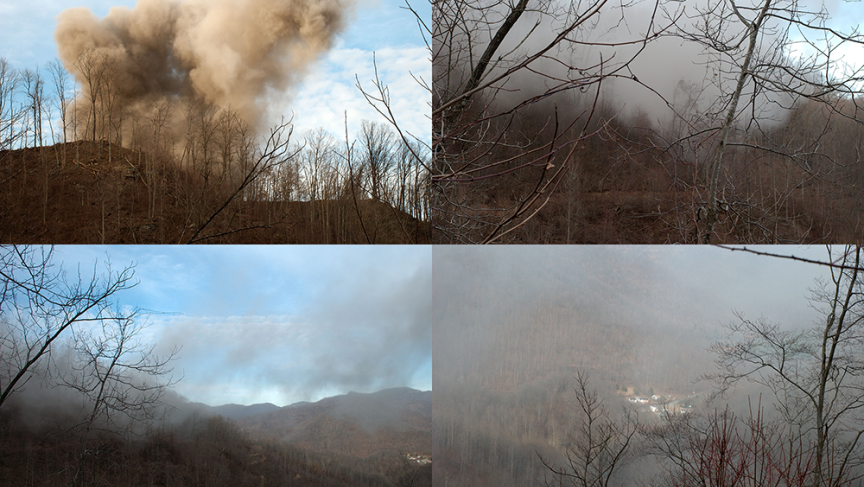 Components of overburden dust can cause irreversible lung damage and cancer when inhaled.
Credit:

A new study published in the Environmental Science and Technology Journal is the first to link conditions created by a particular kind of mining with biological changes in human lung cells of people living near those active mines.

Cells exposed to dust collected from communities farther away from mining did not show the same changes. “This is an important new development in the research line,” Hendryx says.

Mountaintop removal is a highly controversial method of reaching coal seams in Appalachia. Miners use explosives and large excavation equipment to expose the coal, releasing large amounts of dust into the surrounding communities. This debris — called overburden — appears to be the cause of the damage to human cells, more than the coal itself, Hendryx says.

The ingredients in overburden are a complex mixture, including silica, molybdenum, aluminum and other compounds indicative of coal particles. When dust particles from overburden are inhaled, they can cause a variety of changes to the body. Silica and molybdenum can be particularly tumor promoting.

“The mechanisms by which that happens are not totally understood, but it involves a variety of changes to cells in response to these foreign agents,” Hendryx says.

The new study collected dust samples from within a mile of an active mountaintop removal mining site. In other studies, researchers have found evidence in the human body for high levels of particulate matter within two or three miles. “We don't know exactly what the progression would be as you move away from the mining, but I suspect that most of the effects are probably within five to 10 miles of active mining,” Hendryx says.

Previous epidemiological studies have estimated that communities in mountaintop mining regions experience up to 60,000 cases of cancer. “That's total cancer, not just lung cancer,” Hendryx notes. “But the extent of the lung cancer would be a sizable percentage of that.”

The evidence for increased risk of cancer was clear even when researchers controlled for the effects of smoking. “In this most recent study, it was only the dust collected from the mining communities that caused the cancer changes in the cells,” Hendryx says. Smokers and people with other types of health conditions will likely be even more vulnerable to cancer risk if they are exposed to the dust, however.

Most disturbingly, Hendryx says, previous research has already shown that the rates of birth defects are higher in children born to mothers who lived in mountaintop mining areas while they were pregnant. “Children that live in mining communities are more likely to perform poorly in school, which is an indication of poor cognitive development.” Exposure to the environmental conditions created by overburden dust may be inflicting further damage on young children, Hendryx says.

The bottom line is that “we have enough evidence from this study and from others on both the public health impacts and the environmental impacts to say that this form of mining should be discontinued,” Hendryx says. “It's environmentally irresponsible and it's a danger to public health.”