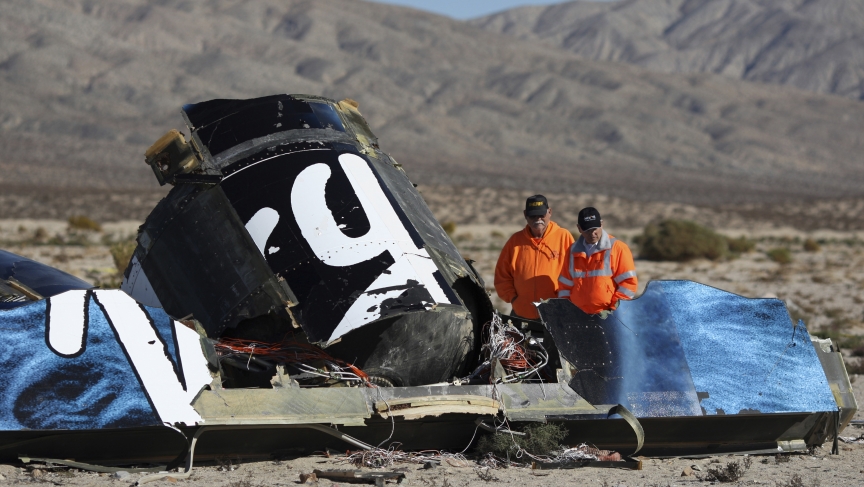 Sheriffs' deputies look at wreckage from the crash of Virgin Galactic's SpaceShipTwo near Cantil, California, November 2, 2014. A suborbital passenger spaceship being developed by Richard Branson's Virgin Galactic company crashed during a test flight on Friday at the Mojave Air and Space Port in California, killing one crew member and seriously injuring the other, officials said.

Virgin Galactic, founded by businessman-adventurer Richard Branson, had been selling six-figure trips to space for anyone with the interest and the money in being among the first Earthlings to be taken off this planet by a private company.

But a wreck last week may have set back that plan — and it's raising questions about the company's committment to safety, too.

More than 700 people have booked flights with Virgin Galactic, paying as much as $250,000 each for a trip that now seems increasingly far off, if it even can be achieved in their lifetimes. And this isn't even a trip to the space station or the moon — it's far lower tech.

"We’re talking about a back-to-the-future kind of flight,” says Miles O'Brien, science correspondent for PBS Newshour. O’Brien has been reporting on Virgin Galatic since its inception a decade ago. “This is basically what Alan Shepard and Gus Grissom did in 1961 for NASA.”

Shepard was the first American to make a suborbital flight as a part of Project Mercury, which is basically the experience that Branson’s Virgin Galatic is offering folks for a quarter of a million dollars. O’Brien describes the flight as a suborbital hop in which the passenger will get to see the curvature of the earth and experience about five minutes of zero gravity.

“It’s a gold-plated bungee jump is what it is and it’s become a bit of a status symbol among certain net worth people to be on that list,” O’Brien says.

One of the big questions following the Virgin Galactic crash, and an Orbital Sciences explosion a few days earlier, is what are the pressures on commercial space flight, and whether, without government oversight, do things get sped up in a potentially risky way?

“No matter what you say, no matter how many ways you slice it, it always costs more to be safer. It’s always less safe when you cut corners,” O’Brien says.

NASA didn’t have to worry about cost as much, he says, because all NASA’s contracts allowed contractors to spend countless amounts of money to make things safer, while still making a fixed profit.

“We’re in a new era now where the idea is to make it commercially viable and any time you have to do that you have to make trade-offs between how much you can spend, how much is safe enough,” O’Brien says.

However, commercial space travel is not necessarily a bad thing. Using commercial companies like Virgin Galactic, Orbital Sciences and Space-X for on suborbital space flight or to send payloads to the International Space Station allows NASA to focus on more far-reaching exploration.

“NASA’s goal rightly should be to explore, to push the envelope, to take us to new worlds,” O’Brien says.

“It’s much like the Internet was created by DARPA and the Pentagon and eventually the private sector took it and ran with it and we got Silicon Valley. Maybe one day we’re going to get to that point in the realm of space. We don’t know if that’s going to work. We’re just seeing that with the likes of SpaceX and Elon Musk and with Richard Branson and Virgin Galactic.”