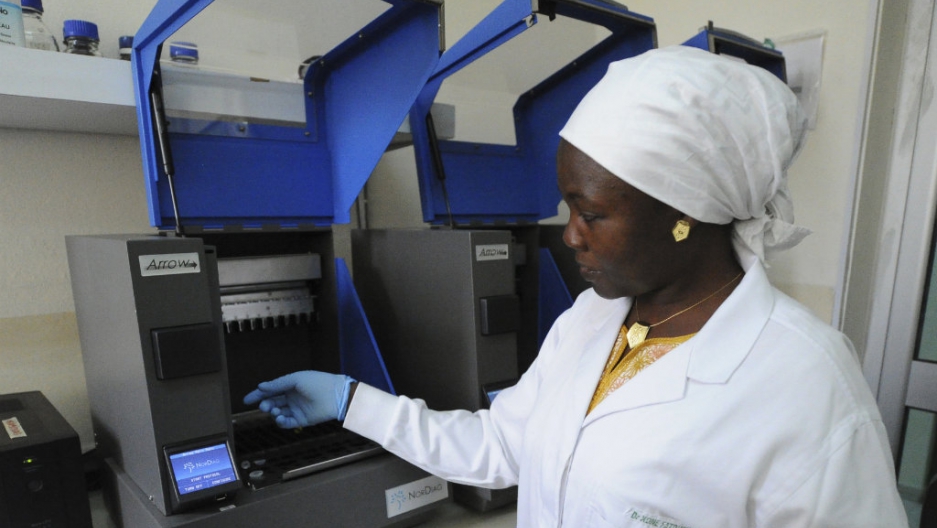 A lab technician at the AIDS Research Center of the Treichville hospital in Abidjan, Côte d’Ivoire explains HIV viral load testing (VLT) on Sept. 13, 2013. African-led research and development has been gaining ground across the continent in recent years.
Credit: SIA KAMBOU
Share

CAPE TOWN, South Africa — A rising call for African-led research has permeated Cape Town this week as HIV researchers and scientists from around the world flooded the city for the first HIV Research for Prevention Conference.

As we move toward an AIDS-free generation, experts say, research should be growing in the places that bear the biggest burden of the disease. Grace Naledi Mandisa Pandor, South Africa’s minister of science and technology, announced at the conference’s opening, “We want customers. We don’t want to be anyone’s client any longer.”

An array of languages and accents bounced off of the wood-paneled walls as researchers, advocates and clinicians flooded the hallways Tuesday through Friday.

African-led scientific research is, in fact, on the rise, and not just in the field of HIV prevention. Reed Elsevier, a publishing and information company headquartered in London and Amsterdam, reported that the number of research papers published in scientific journals with at least one African author more than quadrupled between 1996 and 2012.

“I think we’ve grown both in number and also in quality and in reach,” said Linda-Gail Bekker, chief operating officer of the Desmond Tutu HIV Foundation headquartered in Cape Town, and president-elect of the International AIDS Society. “I think some of the best science is coming out of Africa now.”

The Emavundleni Research Center in Crossroads — a township in Cape Town — one of several run by The Desmond Tutu HIV Foundation, conducts six to nine trials at once.

Discussions about HIV prevention research in Africa, ranging from vaccine trials to microbicide efficacy, peppered the conference this week.

This is a marked change from 25 years ago, when Anatoli Kamali began his career in HIV prevention research. Kamali, a clinical epidemiologist and the deputy director of the MRC/UVRI Uganda Research Unit on AIDS, co-chaired the conference and said that no formal AIDS prevention research institutions existed in many areas when he first became involved with HIV/AIDS research in the late 1980s.

“There was kind of fighting for resources to provide care … and many countries which were recovering from longtime wars,” Kamali said. His home country of Uganda suffered from decades of instability and violence, which Kamali said left the country without sufficient infrastructure.

Kamali said he has seen a steady increase in HIV prevention research in Uganda over the years.

Still, there’s a long way to go, said Prince N. Bahati, senior director of global advocacy and policy at the International AIDS Vaccine Initiative, who pointed to weaknesses in the education and training systems in many countries and said there is a dire need for more researchers throughout Africa.

He added that 25 percent of the world disease burden is in Africa, but Africa consumes less than one percent of global health spending.

And though the number of papers published by African researchers have increased dramatically, these still only make up about 2 percent of the total, according to the Reed Elsevier report.

Why is it important to make sure that Africa is a leader in HIV prevention research?

Bekker points to the importance of having people on the ground who have a connection to the communities most affected by the epidemic.

“HIV is very much grounded in the community — it happens at the primary health level, and it is something that really works into the fabric of society,” she said. “Therefore I think it’s quite important that people understand that context and that the research is done with that kind of framework.”

Kamali turned to a statistic: More than 70 percent of the people living with HIV worldwide are in Africa.

“We’ve got the burden,” said Kamali. “So we must be part of the solution.”

More on GlobalPost: Branding Health: The Rise of Public-Private Partnerships in Global Health