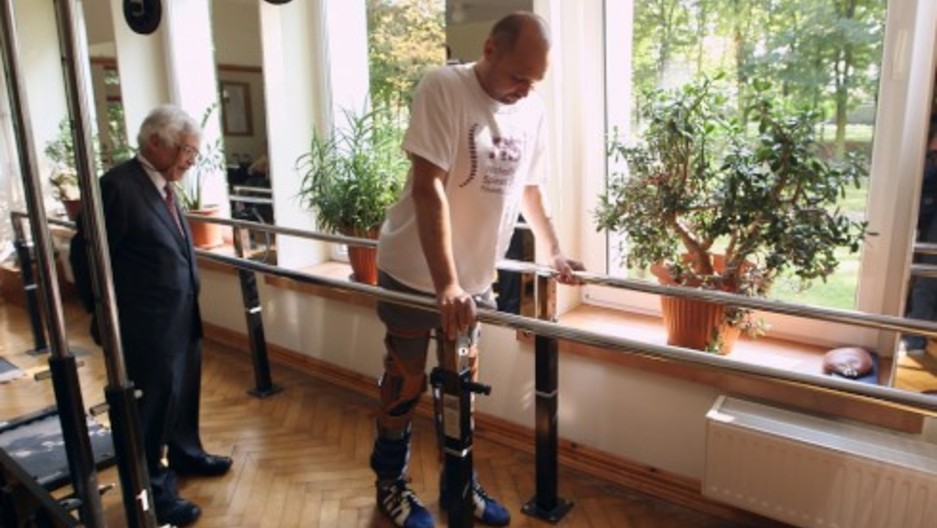 Darek Fidyka was paralyzed in 2010 from the chest down. He now can walk using a frame thanks to treatment using olfactory ensheathing cells.

Darek Fidyka hasn't been able to walk for four years. But a pioneering new surgical treatment has now given him his legs back, in what scientists believe is the first-ever instance of renewed nerve growth in a person with a spinal cord injury.

Fidyka, a Polish man, was stabbed in the back four years ago during an attack. The wounds left him paralyzed from the chest down, with an eight-mm gap in his spinal cord.

In spinal cord injuries, severed nerve fibers don’t grow back in part because the tissue on either side of the wound scars over. But Geoffrey Raisman, a professor at University College London, believed he could fix that using nasal cells called olfactory ensheathing cells.

Those cells are the only ones in the human nervous system known to promote nerve cell regeneration. They act as a sort of pathway that allows nerve fibers in the olfactory system to regrow after they have been damaged or replaced.

Based on nearly three decades of research using rats, Raisman believed ensheathing cells would “open that scar so that the nerve fibers can get in and out. Once the fibers can get in and out, they then look for the bridge of nerve strips that have been placed there," he explains. "They know where to go, they know what they're destination is, they know what their purpose is. But you have to provide them with the pathway.”

Raisman's research team worked with another group led by Dr. Pawel Tabakow, a consultant neurosurgeon at Wroclaw University Hospital in Poland, and created the new technique used on Fidyka. Raisman's surgeons were able to partially repair the spinal gap using strips of nerve fibers from Fidyka’s ankle and specialized cells from his nasal cavity.

Fidyka's was the fourth in a series of operations designed to test the safety of transplanting ensheathing cells, but only the first to use nerve fibers from a different part of the body to help bridge the gap. That was a suggestion from Tabakow, who proposed adding the nerve strips from the patient’s ankle because the number of ensheathing cells wasn't sufficient to bridge Fidyka's injury.

Raisman says it's also the first surgery that successfully restored partial function to the patient. That's probably due to a very small number of nerve fibers managing to find their way across the transplanted cells and the bridge of nerves, he explains. The patient will still need to undergo intense physiotherapy over a long period to “learn how to use that small number of fibers that we have given him back.”

Raisman has been flooded with inquiries from all over the world asking about the surgical techniques used in Fidyka's case. Unfortunately, he says, they have to wait.

This surgery was successful, but Raisman cautions it was hypothetical in many ways. They believe partial movement and function was restored because of their surgical technique — but until it can be duplicated in other patients, they can’t know for sure.

“This is one patient," Raisman points out. "The next patients are going to be investigations of how to improve this. Can we repeat it? My estimation is that we need three to five years to either repeat and confirm our ideas or prove ourselves wrong.”