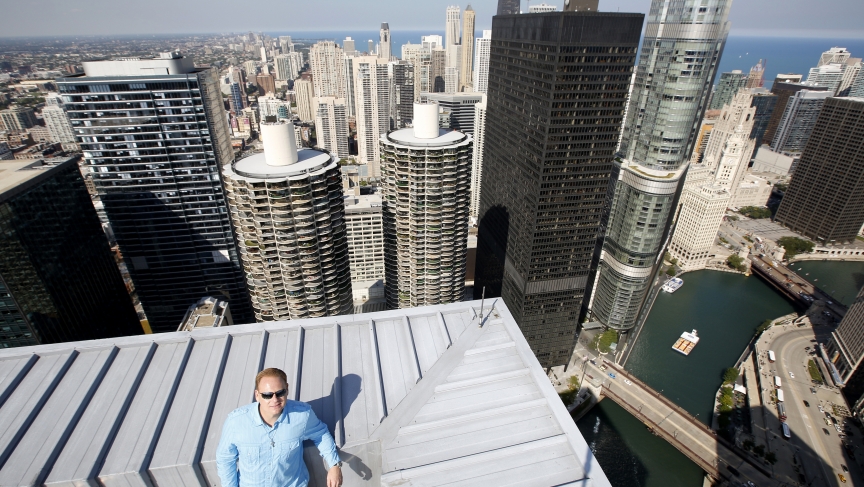 Daredevil Nik Wallenda poses for a photo on the rooftop of the Leo Burnett Building in Chicago on September 17, 2014.

On Sunday, when a huge portion of the planet watches Nik Wallenda walk a tightrope atop Chicago’s Marina City, expect the residents of the storied corncob towers to take it — well, in stride.

After all, they’ve already seen everything from cars flying off the parking ramps into the Chicago River — twice — to destruction by marauding Decepticons. “It’s kind of a quirky, nutty place to live,” says Steven Dahlman, creator of Marina City Online and its companion Loop North News and Facebook page.

His only request is you get the name right. “My hide gets a little chafed when people call it ‘Marina Towers,’” he says, noting that the twin 60-story high rises are just part of a complex including smaller buildings like Chicago’s House of Blues.

Designed by Bauhaus architect Bertrand Goldberg, it was a game-changer even before ground was broken in November 1960. Goldberg built his towers around a solid core dug into a deep foundation, and each unit extends out of it like a slice of pie. Ringing them are balconies — or the kernels of the corncob, to continue the food analogy. 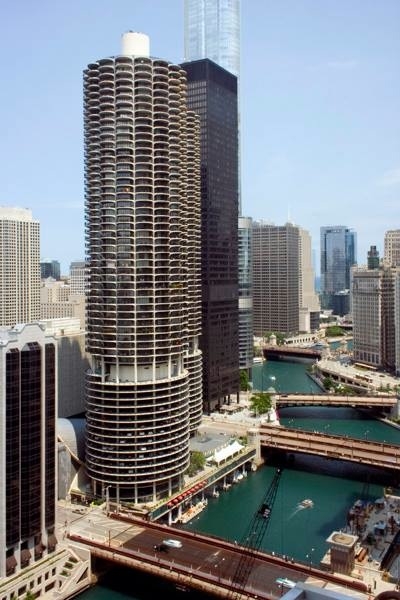 Marina City, once among Chicago's tallest buildings, is dwarfed on the right by the IBM Building (now 330 N. Wabash) and the 92-story Trump Tower.

Growing up two miles away, I remember seeing them rise on their way to becoming the world’s tallest residential buildings. They've long since been eclipsed by upstarts like the 92-story Trump Tower, so good luck trying to pinpoint them in Chicago’s skyline today.

“I know a number of people who’ve lost their views and they’re really a little philosophical about it,” Dahlman says of the complex's once-clear lookout over Lake Michigan. That view was first blocked by the black IBM Building across State Street, ironically designed by Mies van der Rohe, the man who mentored Marina City's designer.

But like parades and protests, it’s all part of downtown living, Dahlman says. There have been celebrity sightings of one-time residents like John Denver and — wasn’t there a mob murder once? “Which one?” Dahlman quips

Then there was the near lockdown for the 2010 filming of “Transformers 3.”

“They really did take over the neighborhood,” Dahlman recalls. “When streets are closed and you’re told ‘you can’t walk that way, you’ve got to go over there,’ I think I and other people accepted it because you felt it was a sacrifice that would result in something big.”

And those aren't even the most famous images of Marina City. That claim likely belongs to the one-take shot of a Pontiac Grand Prix soaring off the 17th floor parking ramp in the 1980 Steve McQueen movie, “The Hunter.” The stunt was so memorable it was repeated in an Allstate commercial 26 years later — only they used an Oldsmobile Cutlass and took two takes.

Wallenda will actually make two walks on Sunday, one starting from the west tower of Marina City and the other between the two — blindfolded.

But that won't be the first high-wire act at the site, either. In November 1975, Ecuadoran aerialist Jose Martinez successfully walked between the towers, though at a considerably lower 60 feet.

If Dahlman can regale you with Marina City’s present, I can add a bit about its past. From 1967 to 1970, I was a paperboy, learning its innards by starting at the 60th floor of each tower and working down the stairs to floor 21.

Some days it took forever to descend 78 flights because my customers would constantly invite me in for chats and treats — even Bears games and sleepovers at one middle-aged couple’s apartment; nothing parents would allow their kids to accept today.

I also watched steam blow out of the ears of Charles Swibel, the acerbic chief of the building management corporation, when I demonstrated to him my “key:" sticking my skinny hands through the slats of the grated main doors to turn the handle from the inside.

They’ve since been replaced with glass. But a word to Wallenda: If you want to get safely from one tower to the other, take the enclosed ground-floor mall. I’m sure somebody will buzz you in. 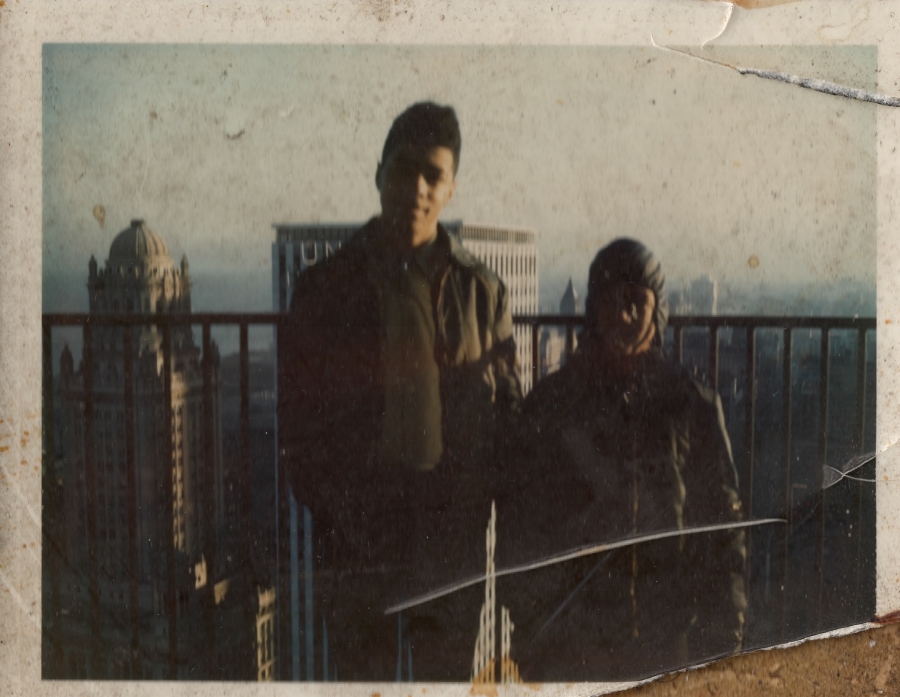 Former Marina City paperboy Robin Washington, right, and his brother Glen on an East Tower balcony in the late 1960s, when the buildings dominated Chicago's skyline.