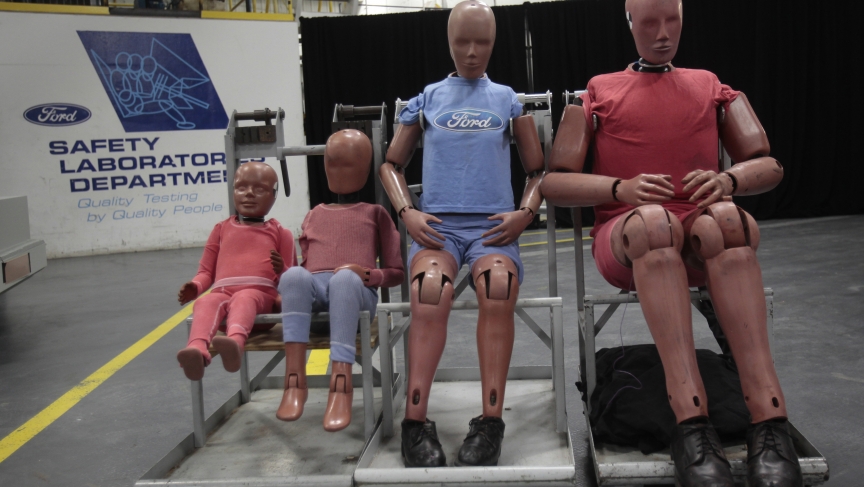 A family of auto crash dummies at the Ford Development Center participate in a full frontal auto crash test in Dearborn, Michigan on March 10, 2014.

Americans are getting heavier. Now, more than 70 percent of us are classified as either "overweight" or "obese" according to definitions by the US Centers for Disease Control.

Setting aside the public health concerns of those expanding waistlines, the situation presents a very real problem for the people who design cars that will be safe in a crash. In particular, seatbelts are designed to be most effective when they are worn low and tight across the waist. In someone who is overweight, that's far more difficult to do — and a study found that the morbidly obese are 56 percent more likely to experience a fatal injury in a car crash.

So now the only American company that makes crash test dummies, Humanetics, is rolling out a new test dummy that's more proportionate to America's expanding size. The new dummy will weigh 267 pounds, compared to the standard adult dummy which weighs about 170 pounds, according to the Independent.

What's next from Russia — a ban on iPhones?

Apple CEO Tim Cook was widely heralded when he publicly acknowledged being gay this week, with many saying it showed the progress that has been made in gay rights in America. But the situation in Russia is hardly the same, where there is a legal ban on "promoting homosexuality" and where discrimination against LGBT individuals is common.

Against that backdrop, it is no surprise that a Russian lawmaker blasted Cook and suggested that the corporate leader be barred for life from visiting Russia. His comments went beyond just hateful, though.

Vitaly Milonov, the St. Petersburg politician behind the city's anti-"gay propaganda" law, suggested that gay people like Cook would bring “the Ebola virus, AIDS [and] gonorrhea” to Russia, according to a report in Pink News. He seems to think there is a link between those maladies. And, evidently, he is unaware that gonorrhea is already endemic in Russia.

Here's the story behind a Halloween video that went viral

If you were browsing the Internet around Halloween several years ago, you may have seen an online video of a man in a black unitard dancing (badly) with a pumpkin on his head. It was the product of a local news station. And for some reason, when it was posted to YouTube, it went viral, with millions of plays.

But the back story of the video has long been elusive. Sideshow, a podcast from PRI's Soundworks network, uncovered the mystery. It turns out the video was produced to fill a bit of time in a news show — where news is defined in the loosest possible way. The station actually repeated its stunt, presumably for the same reason, during its Christmas broadcast, pumpkin head and all. Don't miss the video — and Happy Halloween!

Certain French towns have recently banned people from wearing scary clown costumes — right in time for Halloween, we might add. The reason? A rash of attacks by mostly teenagers wearing clown costumes, inspired by social media.

This has led to coulrophobia, the technical term for fear of clowns, sweeping across France. There have even been reports of counter-vigilantes taking up arms to go after "menacing clowns."

Now, the clown menace has spread to Spain, claims the website TheLocal.es. One witness told a local newspaper in the city of Gijón that he saw a clown menacing people for at least 20 minutes. The Gijón clown actually has his own Instagram feed, where he claims to be perfectly friendly — though the witness begged to differ.

Turkish President Recep Tayyip Erdoğan has a new home. It is the country's new presidential palace, built at a cost of $350 million, and boasts more than 1000 rooms. By comparison, the White House has just 132 rooms and it's estimated that it would sell for about $100 million today.

The high cost and extravagance of the new palace has irritated many Turks, who see it as an expression by Erdoğan of an "imperial" streak that is also manifested in his politics and policies. The palace started out as the home for the prime minister, when Erdoğan held that office. It became the presidential palace when Erdoğan hit a term limit as PM and ran for president.

PRI's The World has photos from the new palace, and more information about the building that is decidedly "neo-Ottoman."

@voxdotcom: A child became a US citizen today while wearing a Captain America costume http://t.co/ajiUkcyeLb pic.twitter.com/Gy8iM7jKy9

India and Pakistan are preparing for Tropical Cyclone Nilofar to come ashore this weekend, bringing localized flooding with it. Fortunately, though, the storm has weakened considerably since gaining peak strength on Tuesday with 135 mph winds (215 kph,) according to AccuWeather. The storm as of Friday evening had winds of less than 60 mph — making flooding a far more pressing concern.