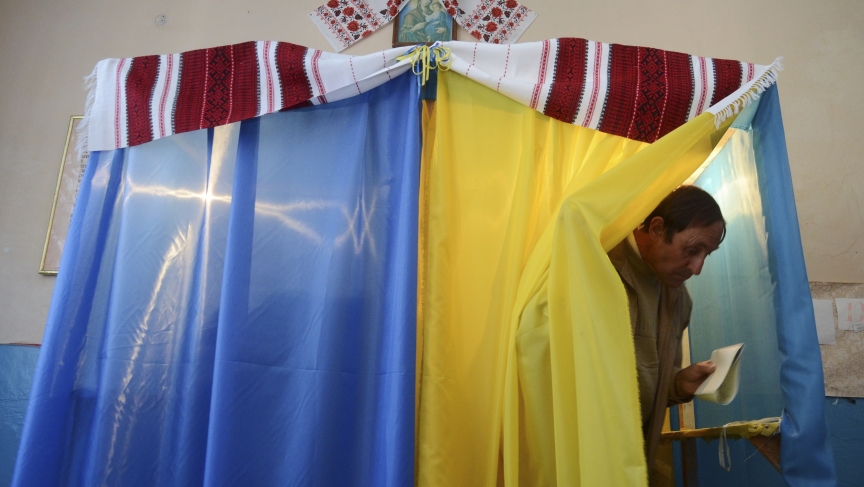 A man walks out of a voting booth at a polling station during a parliamentary election in the village of Fiina near Lviv, on October 26, 2014.

More than half the ballots have now been counted from Sunday's parliamentary election in Ukraine, and voters seem to have sent a clear message about the country's future.

Pro-European parties polled over 50 percent while, for the first time since the Russian Revolution of 1917, the Communist Party failed to win a single seat.

The US and Europe have predictably called this a victory for Ukraine and democracy, echoing Ukrainian President Petro Poroshenko.

“What I see is an election that has helped draw Ukraine together,” says Geoffrey Pyatt, the US Ambassador to Ukraine. “It has certainly clarified the choices that the Ukrainian people themselves are making. I think you’ve seen through these two elections — the presidential election of May 25 and the parliamentary elections of last Sunday — a clear desire by the Ukrainian people.”

Pyatt says that desire is for a society that is more democratic and more European, as evidenced by the votes. But economic and political challenges lie ahead.

Ukraine has received no gas from Russia for the past several month, though negotiations are currently underway between the two countries and the European Union and there were reports Friday of a deal. The US and Europe have meanwhile pledged financial and technical support to Ukraine.

“Over the long term, the most important thing is reform,” Ambassador Pyatt says. “Ukraine is not a poor country. It has enormous resources and some of the best agricultural land in the world. It could, quite reasonably, become the second largest grain exporter in the world in a few years. It has shale gas, good human resources and industry. What it lacks is good governance, and that’s what these elections and these reform movements have been about.”

Pyatt rejected the idea that Ukraine is starkly divided between a pro-Europe western half and a pro-Moscow east. “I think it’s important to recognize that there are plenty of Ukrainians in eastern cities who are just as interested in good governance and economic modernization as their countrymen in the west or in the south,” he says.

He instead argues that “Russia has peddled this false narrative of division and occupation." At the same, Russia surprised global onlookers by recognizing the election results.

Pyatt links that with what he said was the eagerness of many eastern Ukranians to vote, though many were prevented from doing so by pro-Russian separatists.

“I think that’s the biggest mistake that Russia has made — the misreading of pride and sense of national identity that is felt by the Ukrainian people," Pyatt says. "It sounds romantic, but I think that those of us who have watched this unfold have no doubt that there is a new Ukraine that’s being born.”