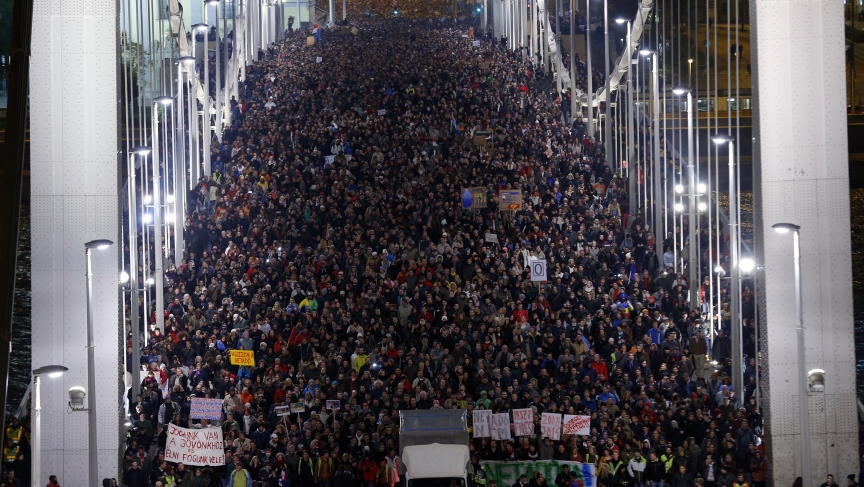 Ten of thousands of Hungarians march across the Elisabeth Bridge in Budapest during a protest against a proposed new tax on Internet data transfers. On Friday, October 31, Hungary's Prime Minister Victor Orban bowed to pressure and decided to scrap the Internet tax idea, for the time being.

Hungary's Prime Minister Viktor Orban thought his idea for a tax on the Internet was a great plan. Orban's been a fixture in Hungarian politics since he was 14 and his previous initiatives to tax the thriving sectors of the economy have all been passed.

But Friday he suffered a defeat. He abandoned plans for an Internet tax after tens of thousands of Hungarians took to the streets twice this week to protest the idea.

One vivid image from the protests was the sight of demonstrators tossing old computer parts at the headquarters of the prime minister's political party, Fidesz. The BBC's Nick Thorpe says the protesters objected to the tax, but that the there was more to it.

"These were protests by largely young people who see the Internet as theirs, effectively, their way of communicating, their way of making politics as well." Most of the state-run and public service media in Hungary are government-controlled or close to the government. "Protesters on the streets were making the point that the Internet is one of the main forms of free expression in Hungary today.

Thorpe spoke to the protesters out on the streets of Budapest this week and says they were primarily made up of tech-savvy individuals from the cities. "Like other countries, in Hungary that adds up to a lot of people nowadays," he says.

The anti-Internet tax group managed to get more than 200,000 supporters to like their Facebook page within a couple of days. And eventually as many as 50,000 people were out on the streets of Budapest to protest.

Thorpe says it's very unusual for Orban to back down. "This is the first time I can remember him doing so. And he said, interestingly, in his radio comments today — when he did back down he made the point of saying: 'We are not Communists. We listen to the voice of the people.'"

Orban is a holdover from the Soviet era and stands in stark contrast to the young digerati. "He's never been particularly proud of his ability to use technology," says Thorpe, "although he does have his own Facebook page and his advisers use the Internet very cleverly."

To be sure, Orban isn't going anywhere. "He's relatively young still. He's been around for 25 years and he's still only 50," Thorpe says.

But the protesters made their point. Thorpe says the Internet tax was the straw that broke the camel's back.

"People wouldn't have gone out onto the streest for just the Internet, though that's what spurred them to put their shoes and coats on. ... They're angry about a lot of things. They do see this as an authoritarian government which has been restricting freedoms in all kinds of ways," he adds.