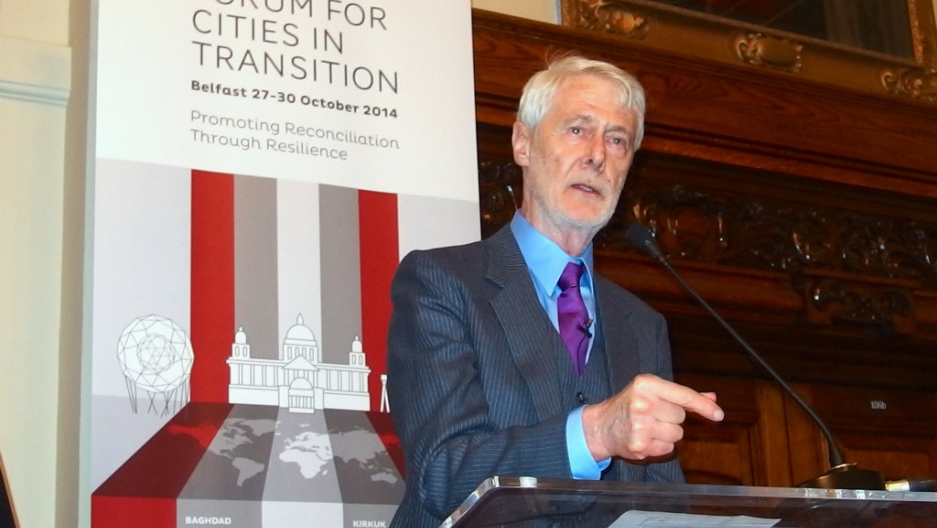 Padraig O'Malley, professor at the University of Massachusetts, Boston, speaks during the 5th annual Forum for Cities in Transition (FCT). O'Malley started the FCT in 1997 so that societies divided in conflict could come together and learn from one another's mistakes and successes in fostering peace.
Credit: Allan Leonard
Share

BELFAST — This city has risen in the aftermath of the 1998 Good Friday agreement, a treaty that brought an end to 30 years of sectarian violence known as “The Troubles.”

While pockets of despair and challenges still exist in finalizing the formula for a government shared between the country’s Catholics and Protestants, the days of car bombings, violent street protests, sectarian killing and heavily armed soldiers patrolling the streets are over.

Investment is pouring into the economy. Employment is up. A once sprawling British army barracks is being transformed into a residential community. The notorious Crumlin Road Jail, where paramilitaries were once held, is now a museum. You can feel public confidence returning in the downtown area.

In the gloriously restored Edwardian structure of City Hall, the 5th annual Forum for Cities in Transition (FCT) gathers political and civic leaders from 14 divided cities to “promote reconciliation through resilience.”

And this city knows resilience.

The simple concept behind the FCT is a philosophy of peace and reconciliation that is the life work of Padraig O’Malley, professor at the McCormack Graduate School of Global Studies at the University of Massachusetts, Boston.

O’Malley’s core idea is that divided cities have much to learn from each other. There are, he believes, shared patterns as well as political, social and psychological traits that perpetuate conflict. The best way to overcome these patterns and traits is through an intervention by those who have experienced them and have learned how to break the cycle.

“You are here to share with each other and to learn from each other,” O’Malley told some 200 delegates from cities that include Baghdad, Jerusalem, Mitrovica in Kosovo and Kaduna, Nigeria among others.

“In all of your cities and societies, you face the same problems,” he said. “The process to end conflict is long and difficult and complex. You must not stop. Your societies must not stop. It’s hard, hard, hard work.”

The FCT was born out of a 1997 conference where members of the Ulster Unionist Party, which believes Northern Ireland should remain within the United Kingdom, refused direct talks with Sinn Fein, the political arm of the Irish Republican Army (IRA). The IRA had conducted a campaign of bombings and armed struggle against the British army with a goal of uniting the 26 counties in the South with the six counties in the North as one Irish republic.

The two parties were convened in South Africa, where O’Malley famously brought together both sides so that they could hear Nelson Mandela, freed after two decades in prison to lead his country to end apartheid, articulate a profound challenge: “We did it. Why can’t you?”

That was the beginning of a 17-year peace process for Northern Ireland. This year’s FCT is a show of progress.

Martin McGuinness, a former commander in the IRA and now the Deputy First Minister who shares power with the leading unionist party, spoke to the gathering at City Hall Thursday, saying, “We have been through a remarkable journey here.”

Referring to Belfast and his hometown of Derry, he added, “These two cities have changed incredibly over the last years.”

He described the effort in Derry to build a foot bridge that links the Catholic and Protestant neighborhoods on opposite sides of the River Foyle: “Sometimes small things can make a difference. Now people know each other, are working together and living together,” he said.

Northern Ireland’s “peace process has been a beacon of hope to other conflicts around the world,” McGuinness added. “Other people are looking to learn from the experiences we have had here. I see what is happening in Iraq, Syria, Eastern Ukraine, and it is absolutely heart breaking to see people losing their lives to conflict. I don't go to these places offering a solution. None did that for us because it has to be done by the people themselves. All sides need a recognition that conflict can go on for a very long time unless they work together to stop it. If that motivation is missing, the fighting will continue.”

He took questions from a Palestinian delegation from Ramallah that said it was losing hope in its peace process, and from the Lebanese city of Tripoli about how best to provide care and counseling for fighters as they transition to peace. They were practical conversations, a sharing of valuable lessons about what works and what doesn’t in these divided societies.

But perhaps the most pointed question came from FCT delegate Valdete Idrizi of Mitrovica in Kosovo. The city is struggling to find peace after the end of the 1999 conflict that pitted Kosovar Albanian fighters against Serbian forces and paramilitaries under the late Serbian dictator Slobodan Milosevic.

Idrizi, who heads up Community Building Mitrovica, a non-governmental organization that seeks to build alliances between the different sides of the divide, talked about the bridge in her town. It, too, spans two divided communities – ethnic Albanian Muslims on one side and the Serbian Christians on the other – but it is not a “Peace Bridge” like the one in Derry. In fact it has repeatedly been the site of violent clashes as recently as this summer. UN peacekeeping forces stand beside idling Humvees that anchor both sides of the bridge.

Idrizi asked McGuinness if he would accept an invitation to their still-divided city and share the lessons he has learned about how to make the journey toward peace.

“We need your help,” she said.

McGuinness ended his talk, saying, “See you next year in Kosovo!”

More on GlobalPost: Belfast after the Troubles