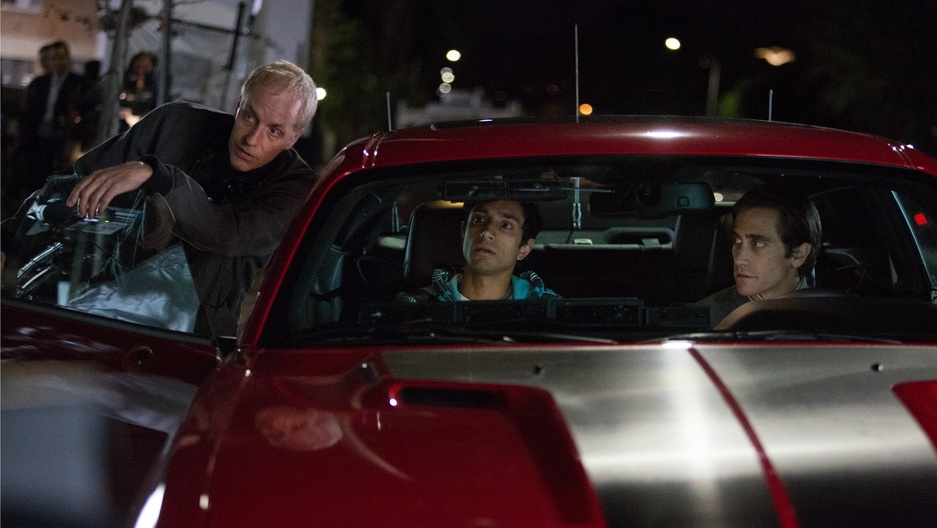 Hollywood has a generally romantic view of journalism --- most of the time, we see reporters fighting some version of the good fight. But the new film Nightcrawlertakes such a dark view of the industry, it makes Networklook sanguine. Jake Gyllenhaal plays a freelance videographer who prowls Los Angeles after dark, listening to a police scanner for car crashes and home invasions to tape for local TV news.

This subculture is real, according to the film's writer and director, Dan Gilroy. In preparing the film, Gilroy went with Gyllenhaal and the movie's Oscar-winning director of photography, Robert Elswit, to ride along with one of such a videographer. "The first call that we went to was a horrific car crash," Gilroy tells Kurt Andersen. "They were harrowing nights."

Gyllenhaal's character, Lou Bloom, is a seriously creepy guy; "he would fit the classic diagnostic label of sociopath or psychopath," Gilroy admits. But the intent was not to make a portrait of a madman. "Our aim was that you would say to yourself, 'Maybe the problem isn't just Lou. Maybe the problem is the world that creates a person like this and ultimately rewards this character for all his bad behavior.'" Gilroy thought, in particular, about the employment prospects for young people now and the desperation they lead to.

Screenwriting and directing is a family business for Gilroy. His father Frank Gilroy, a Pulitzer Prize-winning playwright and screenwriter, directed his own first film in his forties; his brother Tony directed his first film at 50; and Dan is now 55. And Nightcrawler was a family effort: Tony produced it, John Gilroy --- Dan's twin --- edited, and Dan's wife, Renee Russo, is the co-star. "I was the beneficiary of being surrounded by people who were there to protect me and what I was trying to do," he says.

Growing up with a father in the rough commerce of Hollywood didn't turn any of them off. "It demystified the business," he says. "You start to think, 'Well, that's something I could make a living at.'"