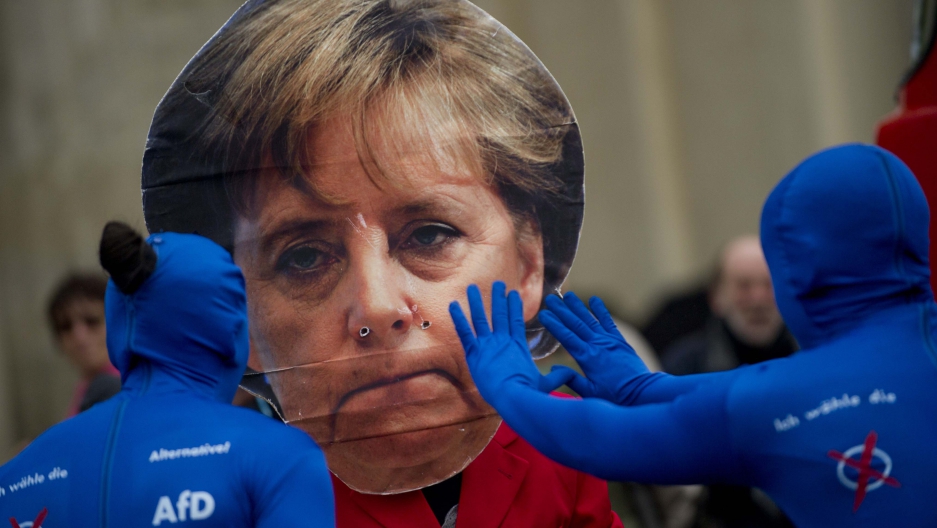 The anti-euro Alternative for Germany Party campaigns for parliament last fall. It's support has continued growing since the elections.
Credit: Barbara Sax
Share

BERLIN, Germany — Fun-hating German misers have Europe in their grasp and the apocalypse is nigh.

As southern European countries just beginning to climb out of the euro crisis brace for the possibility of another recession, some are ratcheting up criticism of the continent’s economic engine for its insistence on using austerity to solve the problem.

With a record budget surplus amid worrying signs of a slowing domestic economy,
critics argue, Germany should loosen its purse strings and stimulate growth.

But are Germans really the austerity-obsessed buzzkills that people like French Economy Minister Arnaud Montebourg make them out to be?

“I think there is a kind of psychological fixation, yes,” says University of Mainz political scientist Jurgen Falter. “But even your phobias can be correct.”

The collective memory of the disastrous, runaway inflation after World War I that led to the rise of Adolph Hitler in the 1930s has ingrained in Germans a deep aversion to deficit spending. More recent experience has also taught them to view government plans to spur growth by doling out cash with a jaundiced eye, Falter says.

“We had big spending policies in the '80s and nothing happened,” he says. “It only increased inflation.”

In September, Germany posted its biggest budget surplus since reunification even as other statistics revealed a worrying drop in exports and a plunge in investment in public infrastructure and new businesses.

With government spending already lower than most wealthy nations’ — 17 percent of GDP compared to an average 21 percent — that's adding pressure on Germany to step on the gas and let others do the same.

“The German government should invest money in infrastructure, not worry about balancing its budget,” argues the Economist, angling for a spending increase of at least 0.7 percent of GDP.

"Frugality is good, but austerity is not an end in itself to spur an economy," Austrian Chancellor Werner Faymann told reporters this month following his own wrangling with European Union bean-counters.

Even Washington wants Germany to increase spending, freeing up funds to repair its decaying bridges and highways as a start.

Earlier this month, Italy teamed up with France to demand that the EU relax the budgetary rigor imposed in response to the crisis and embark on a more expansionary path.

France can’t align itself with the “excessive obsessions of Germany's conservatives,” warned Montebourg, likening the preoccupation with austerity to “a serious disease, persistent and dangerous.”

Many economists also believe Germany can and should increase its level of investment.

Guntram Wolff, the German economist who heads the Brussels-based Bruegel Institute, advocates a European investment program that would target education and infrastructure in countries like Spain — which has a youth unemployment rate of more than 50 percent — and other countries where deep budget cuts threaten to create a lost generation.

“Intellectuals and international institutions are quite clear that countries with fiscal resources and borrowing capacity such as Germany should spend more and countries with their back against the wall such as Italy should be very cautious,” he says.

“But on the political level, what you see is that those countries that can spend money don't want to, and those that can’t actually want to.”

The disconnect is once again pitting Germany against the rest of the EU.

France in particular is angling for a free pass to allow deficit spending of 4.3 percent of GDP in 2015, instead of the 3 percent stipulated by the euro zone's financial authorities, prompting many Germans to view calls for their own increased domestic spending as a Trojan horse.

Falter says the battle reminds him of the mammoth spending spree France embarked on after World War I.

“When they were asked who would pay for that, they would say, 'Germany will pay for everything,'” he says.

While outsiders clamor for more German spending, support for the new pro-austerity Alternative for Germany Party, AfD, has grown from the 4.7 percent of the vote it earned in parliamentary elections last fall to 7.5 percent today, according to a recent poll.

That's enabled it to cut into Chancellor Angela Merkel's conservative base.

Even in left-leaning Berlin, it's hard to find a hard-core tax-and-spend liberal on the streets.

Horst, a driver employed by parliament, says he cooks for himself, studies price tags and buys his clothes secondhand, with the exception of shoes.

“People still get very nervous about inflation and being burdened with a lot of debt,” says the 62-year-old, who asked that his last name be withheld.

Michael Daubman, who headed an outplacement firm before he retired, says his recent experience as the executor of an estate in Greece soured him on government spending.

“We should spend a little more money for industry, but we shouldn't spend money all over the world only for goodwill,” he says.

Hans-Joachim Berg, a member of the euroskeptic AfD, agrees.

“I don't quite comprehend how spending German money internally will help foreign economies,” he says.

That's the essence of the problem for many Germans who don’t understand how their spending would stimulate growth elsewhere.

More from GlobalPost: This Irish cottage may really be haunted by violent fairies

Most observers blame Germany's slowdown on falling demand for German machinery in China. So filling potholes on the Autobahn is unlikely to encourage the Mittelstand — the country’s famed economic backbone of small and medium-sized companies — to ramp up production for non-existent customers, critics say.

Moreover, as an export-oriented economy, they say, Germany grows at the expense of the rest of Europe, at least to some extent. That's why until recently, when Germany's own economic numbers started to look ugly, some of those same voices were calling on Berlin to somehow reduce its trade surplus.

Increasing spending while dampening exports, critics here say, is a feat few if any governments have ever attempted.