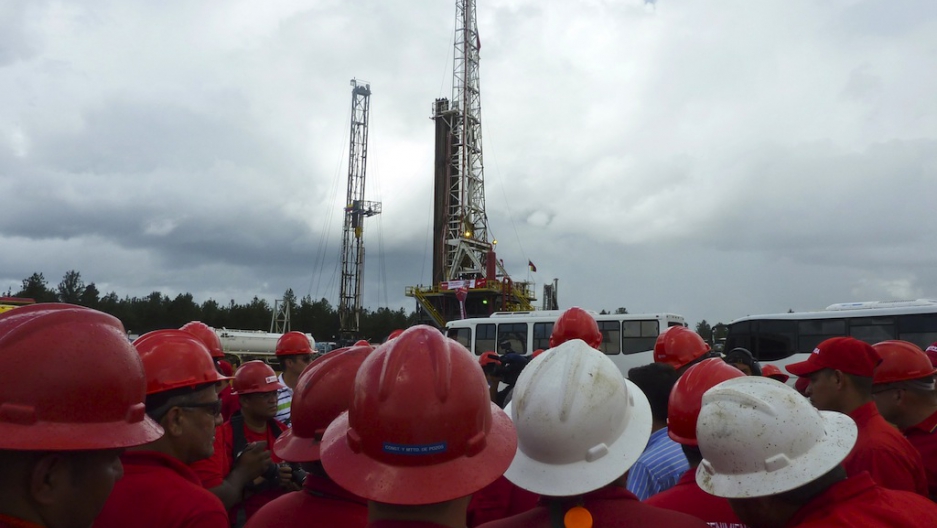 Update: With oil prices crashing through the $50 per barrel floor on Jan. 6, crude producers from Russia to Ecuador are facing a tough 2015. But few have their backs to the wall quite like Venezuela. Home to the world's largest reserves, the South American nation's economy is utterly hooked on oil and was already in crisis before crude prices halved in recent months. These two graphs, first published by GlobalPost in October, show why.

LIMA, Peru — Venezuelan President Nicolas Maduro has seen it all.

Skyrocketing inflation, widespread food and medicine shortages, and one of the world’s highest murder rates — not to mention furious protesters blaming the misery on 15 years of “Bolivarian” socialist rule by Maduro and his late political mentor, Hugo Chavez.

Way up the proverbial creek, the president has so far managed to navigate all those national calamities. But, as these charts show, he may now face losing the paddle.

Crude oil prices have sunk by about one-fifth since June. On Thursday, a Reuters poll marked the biggest downgrade to oil rate forecasts since the global economic crisis.

The Chavez and Maduro governments have relied on Venezuela’s vast oil bounty — its reserves of 298 billion barrels are the largest in the world — to shore up support through massive social spending on the poor.

The problem is that Caracas’ dependence on oil is now almost absolute. Global crude prices have dropped by about 25 percent since June. That’s prompted speculation that Venezuela may be headed toward a debt default.

“We are carving out a new range,” he adds, predicting that global oil prices will settle in the medium term at somewhere between $75 and $85 a barrel.

Nevertheless, the Maduro administration still has a few cards up its sleeve, especially if it hangs an ideological U-turn and allows Western oil majors to make new investments in its energy sector. “You have got to remember they are sitting on just huge reserves,” Saucer says.

Does the future of Chavez’s “revolution” now depend on cutting deals with the likes of Exxon or Chevron, some of the most powerful players in a global capitalist system that “El Comandante” once declared an enemy?