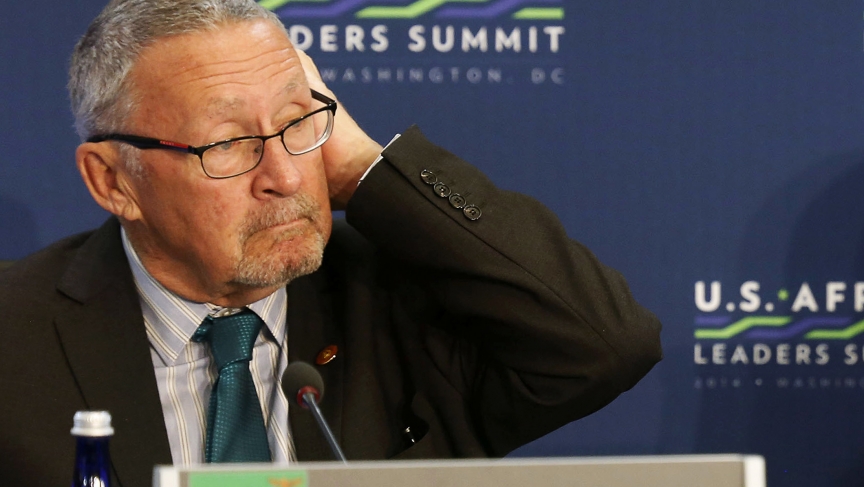 Zambia's Vice President Guy Scott (L) listens as US President Barack Obama (not pictured) speaks, at the first Leaders' Session of the U.S.-Africa Leaders Summit, at the State Department in Washington, on August 6, 2014.

Guy Scott says he felt more like a “mascot” or a good luck charm when attending summits for African dignitaries than vice president of a sovereign nation.

But with the death of Zambian leader Michael Sata, Scott, 70, is now the country’s acting president — steward of a booming economy propped up by high copper prices and substantial Chinese investment.

“Until recently, issues like race were of secondary importance to Zambians,” said Nicholas Cheeseman, an associate professor of African politics at Oxford University.

He added that “relations between blacks and whites in Zambia have historically been healthier than, for example, in Zimbabwe or in South Africa.”

But Cheeseman, who also co-edits the academic journal African Affairs, said all that could change if Scott reveals he has future presidential ambitions.

Scott was born in Northern Rhodesia, present day Zambia, and has been a major political force in Zambian politics for more than 20 years. He was part of the nation’s opposition movement against Zambia’s one-party government of the 1990s, and later joined the Patriotic Front, the nation’s current ruling party.

Despite his political career, Scott is barred from running for president under current Zambian law, because his parents were not born in the country (he’s of British ancestry). Under the Zambian constitution, Scott is required, as acting president, to facilitate a presidential election within 90 days.

“Zambia has a constitution where an awful lot of power is invested in the presidency,” Cheeseman explained. “So it will be interesting to see whether he is able to resist the temptation to change the constitution, or to challenge it in the courts as others have tried to do.”

Images of Scott conjure up those of the last white president on the African continent: F.W. de Klerk of apartheid South Africa. But Cheeseman points out de Klerk was elected by a wholly white constituency, while Clark ascended to political prominence by way of “free and fair elections.”

Vukasin Petrovic, the director of Africa programs at Freedom House, hopes Zambia will lift the restrictions Sata’s government placed on the media and NGOs. He also sees Sata’s passing as an opportunity for Zambia “to return to a democratic path.”

“The government of Zambia should ensure that presidential succession occurs in accordance with the constitution, and that the election to choose President Sata’s successor is free, fair, and transparent,” Petrovic said, in a statement.

Zambia sits at the top of Southern Africa, and has a population of roughly 14 million, 40,000 of whom are white. It’s enjoyed 7 percent GDP growth for the last five years due to rising copper prices, buoyed by Chinese appetite for the commodity.

While the Zambian economy is presently a feel-good story, Cheeseman said the long-term prospects for sustained growth are mixed.

“A lot of people fear if the price of copper falls, the Zambian economy will be exposed as actually very weak and dependent on the export of that good,” he said.

As for his political rhetoric, Cheeseman says Scott is known for making critical, off-the-cuff comments about neighboring nations, despite close economic and political ties.  He’s been highly critical of South Africa, calling the nation “backwards,” and has insisted that infamous Zimbabwean leader Robert Mugabe wants to leave office.

When asked how Scott is viewed generally in Zambia, Cheeseman said he’s seen as an intellectual and a moderate political voice, contrary to Sata’s “knee-jerk, populace” style.

“Scott is highly respected, but Zambian politics have strong ethnic undertones,” Cheeseman added. “Most people don’t see him as having a very strong base.”