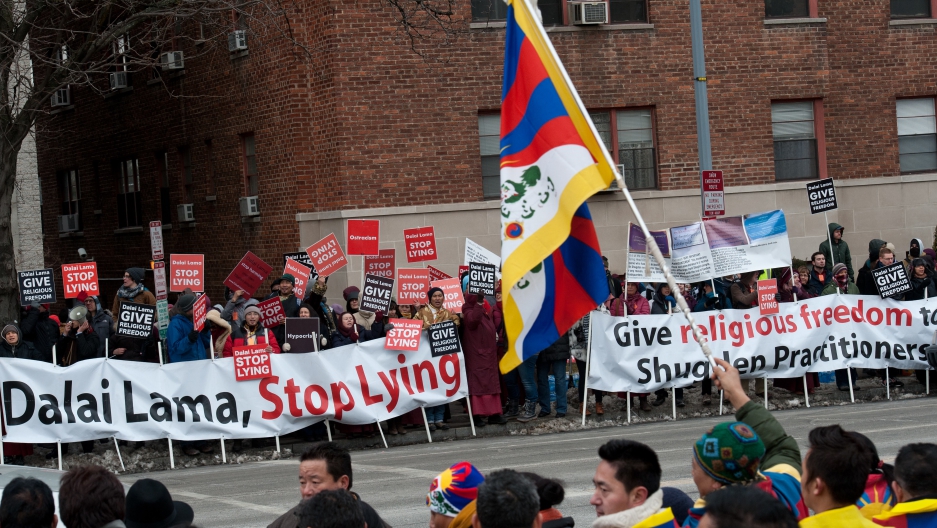 WASHINGTON, DC — The Dalai Lama is currently on tour in the US, delivering Buddhist teachings and talks on secular ethics to adoring crowds.

Yet from Birmingham to Boston and Princeton to New York City, he has been hounded by boisterous and media-savvy protesters, a couple hundred people strong. Mainly Americans, some don crimson monk robes. A small number of Tibetans have also joined their ranks.

Outside of concert halls and arenas, they carry signs and chant “Dalai Lama Stop Lying.” Inside, they regularly interrupt the teachings to shout their disagreement, before being escorted away by security.

What exactly is their grievance with the 79-year-old Nobel Peace laureate, icon of compassion and symbol of Tibet’s 60-year nonviolent struggle against China?

No, they have not been sent by the Dalai Lama’s opponents in the Chinese government — at least, there's no conclusive evidence of that — although the Communist Party does play a role in this story.

It’s mainly a religious matter, and one that has frayed the fabric of Tibet’s Buddhist community for some time.

The protesters belong to a group called the International Shugden Community, or ISC. They contend that the Dalai Lama has banned their religious practice, resulting in intolerance against them.

“We are asking the Dalai Lama to put into writing that he wants to end the discrimination of Shugden Buddhist and distribute it throughout the Tibetan Buddhist community,” said Nicholas Pitts, the leader of ISC protests in Boston.

The ISC members worship a spirit in the Tibetan pantheon known as Dorje Shugden. Both sides agree that Shugden is powerful, but there is disagreement over whether he is an enlightened deity or a kind of spirit. The Dalai Lama has said worshipping Shugden results in divisions within the Tibetan community — and is actually harmful to his own health. He has advised Buddhists not to associate with this spirit.

Prominent Columbia University professor of Buddhism Robert Thurman calls ISC “a cult,” and contends that the Dalai Lama has not banned anyone from any religious practice.

The demonstrations are so common that law enforcement officials across North America and Europe set up protest zones to separate the ISC from the enthusiastic crowds attending the Dalai Lama’s event. ISC protestors are often met at the venues by Tibetans and Westerners who yell their support for the Dalai Lama.

The Dorje Shugden controversy — which has led to violence in modern times — is esoteric, and dates back to the 17th century. Shugden devotees contend that the spirit is full of compassion and wisdom, and is where they place their ultimate refuge.

The Dalai Lama says Shugden is a kind of worldly spirit, not unlike a ghost in a Western sense, with a propensity to incite sectarianism and violence. The Dalai Lama prayed to the spirit in the 1960s, but ceased the practice in the 1970s after researching its tumultuous history.

More from GlobalPost: This Irish cottage may really be haunted by violent fairies

In the 1990s, he became outspoken against Shugden worship, and by the middle of that decade the conflict erupted into bloodshed. An anti-Shugden abbot who was a personal friend of the Dalai Lama was ritually murdered in 1997, along with two assistants, just a stone’s throw from the Tibetan leader’s residence in Dharamsala, India.

Indian police identified Tibetan Shugden followers as the culprits but they were said to have escaped to China. In India, where many Tibetans refugees who have fled China live, brawls between pro- and anti-Shugden groups are not uncommon.

Shugden followers say they experience discrimination in exile communities, being denied entrance to shops and public institutions, especially after the Tibetan government-in-exile instituted a prohibition on government employees associating with the spirit.

The conflict about Dorje Shugden is no longer mysterious but rather brings to the surface fractures in Tibetans’ solidarity for their freedom struggle, as well as in the long-standing Western support for their political cause.

Matteo Pistono is a scholar of Tibetan Buddhism and the author of "Fearless in Tibet" and "In the Shadow of the Buddha."