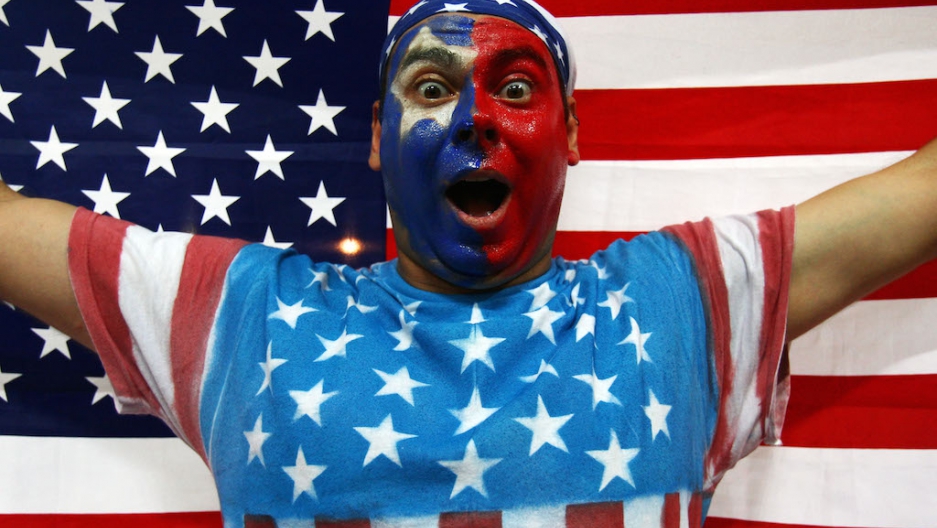 A US fan supports his country during the 2008 Beijing Olympics. Now, if workers in the US toiled 10 hours to afford a meal at a roadside cafe, would he really be this patriotic?
Credit: Mike Hewitt
Share

BEIJING, China — Did you know that in America, workers toil for a lowly $3 to $5 an hour? And that’s hardly enough to live on when “a meal at a roadside cafe costs $20-$40 per person.”

These odd and erroneous claims are some of many made in “Broken Dreams in America,” an essay by Zhou Xiaoping. The 33-year-old has become the official toast of Beijing since Chinese President Xi Jinping singled him out (along with fellow blogger Hua Qianfang) for special praise at a “Forum on Art and Literature” this month. President Xi hailed their work as possessing “positive energy.”

One of his best-known pieces, headlined “Nine Knockout Blows” against America, claims that Hollywood is part of a plot to undermine China and compares American attitudes toward the Chinese to Hitler’s treatment of the Jews.

In fact, since the controversy generated by late-1990s films like "Kundun" and "Red Corner," Hollywood has been skittish about losing a potentially huge market by criticizing China. Far from it: The arch-blockbuster of 2014 was "Transformers 4," a bloated and critically panned sequel ridiculed for overt pandering to Chinese brands and sensibilities.

But since Xi’s speech, arguing with Zhou’s version of the truth has become an act of political defiance — no matter how famous you are.

In a point-by-point rebuttal, Fang suggested Zhou had “sleepwalked” through America and wondered, “Does he think netizens are as easy to fool as politicians?”

In fact, Zhou has never laid eyes on what’s known in Mandarin as Beautiful Country. “I haven’t been abroad,” Zhou said of his anti-America screed. “But I have many overseas friends.”

Fang’s takedown went viral — then vanished. When he protested, his Weibo (China's version of Twitter) account was suspended. Thirty minutes later, all his blogs were gone for good. Critics’ accounts have been suspended or functionally disabled in the past; this time was different. As one blogger observed: “Quite literally, Fang Zhouzi has been erased.”

Fang, widely known by his pen name Fang Zhouzi, certainly had the gravitas for such a critique. In 2012, he won the prestigious Nature magazine’s inaugural John Maddox Prize, awarded to individuals who “stand up for science.” In the past, he has discredited businesswoman Peng Fu’s high-profile Cultural Revolution memoir "Bend, Not Break" for being flexible with the truth, called out Microsoft’s former China CEO for having a fake diploma, and has even rendered the once-outspoken writer Han Han virtually mute with a crusade accusing the younger novelist of plagiarism.

That he’s done so at considerable risk, suffering both physical attacks and online censure, is a testament to his credibility: “Attacking Fang Zhouzi is the same as declaring war on civilized society,” journalist Xu Xiaoping (no relation to Zhou) once declared.

Zhou Xiaoping, then, was an obvious target. And despite the web wipeout, Fang’s debunking apparently worked. Soon, Chinese searches for Zhou Xiaoping, as well as his nickname, “Belt Fish” Zhou, were producing the all-too-familiar message that results could not be displayed, “according to relevant laws and regulations.”

Robbed of his digital existence in China, Fang switched to Twitter, where his following had almost doubled overnight. There, he soon wondered if the Los Angeles Times also “feared retaliation” for writing about him: the newspaper’s article was bylined, “A Times Staff Writer.”

Back in China, official media have gone into spin cycle. One editorial in Beijing’s Global Times detected intellectual snobbery in the criticism: “[Zhou and Hua Qianfang] did not graduate from famous schools and haven’t received a systematic education. … Their language is coarse, radical and almost vulgar,” the writer admitted. “Respecting such young, immature, grassroots contrary voice is very difficult.”

As the rebuttals for and against Zhou mount, and censors battle to delete them, the affair puts the spotlight on China’s ideological landscape. Some warn that Beijing is bent on waging ideological war with “Western values.” Why else might China’s president, who usually likes to invoke an appreciation of classical philosophy, choose a naïve and rather fallible writer for celebration?

A former People's Liberation Army engineer who became a low-level provincial bureaucrat, then drifted into online gaming, Zhou’s profile resonates with many: Born without privilege, not endowed with any natural talent, he once lived a life both itinerant and anonymous. As an online entrepreneur, he’s had to fend off allegations of peddling pornography, one of many types of media banned on the web.

“If common citizens really want to say something, there are only 'praise-singing choirs' on the internet for them to join,” says Renmin University politics professor Zhang Ming. So Zhou instead found his niche as a “wumao.” Coined to describe China’s army of low-paid web commentators — who allegedly number 300,000 and earn a nickel a comment to “guide public opinion” — the term wumao is commonly applied toward those who parrot the government line. “The wumao is a creation of the market economy — many do it just to make a living,” explains historian Zhang Lifan. “And right now, Zhou is exactly what the party needs: young, politically correct and obedient.”

In fact, President Xi could have known that his endorsement of Zhou was risky. In 2013, Zhou publicly attacked ex-Google China chief Lee Kai-Fu for faking his own cancer and conspiring with “hostile foreign forces.” These erroneous taunts prompted disgust. Even the Beijing News retorted that Zhou had “dropped [a rock] on his own foot” and said “debate should comply with the laws of evidence.” Unlike others, Zhou’s rumormongering didn’t earn him a prison sentence, but he did claim to be quitting writing.

A year later, with China’s lively media environment brutally shorn of dissenters, Zhou shows much less inclination toward putting down the poison pen. When Liu Xuesong, a columnist at a Zhejiang-based newspaper, wrote a conciliatory plea entitled “This world should be big enough to tolerate both Zhou Xiaoping and Fang Zhouzi,” both he and his article vanished from the web.

In a sense, Zhou belongs to a long line of “courtly” writers in imperial China. Mao Zedong, whom President Xi has implicitly compared himself to, cultivated supporters like Guo Moruo and Hu Qiaomu. The difference is “they were hugely talented, sharp and full of literary skills … people like them don’t exist anymore, so [the Communist Party] has to do with folks like Zhou,” says the historian Zhang.

He adds, “I read a comment online: ‘Take a look at the pet and you will know the taste of his master.’ I think it’s very meaningful."