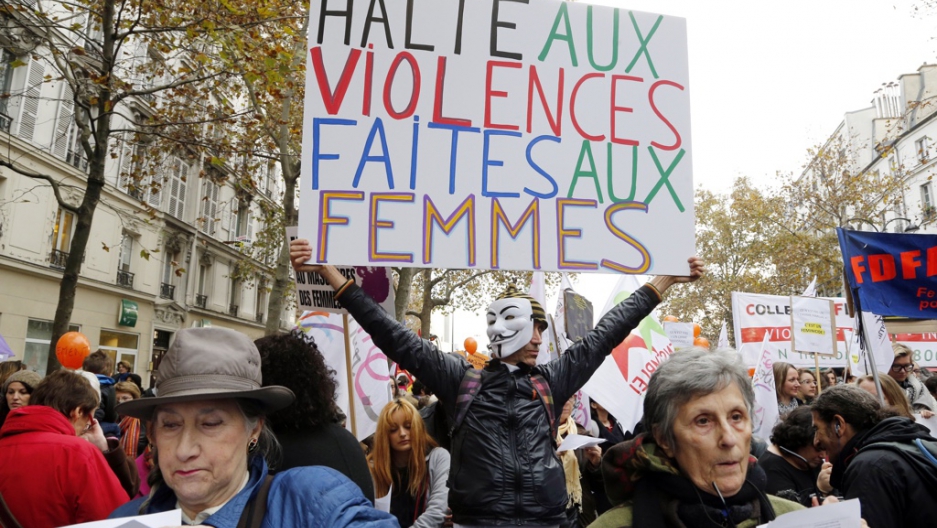 Women parade during a demonstration called by the "Collectif du droit des femmes" (Group for women's rights) as a man holds a banner reading "Stop violence against women" on Nov. 22, 2014 in Paris.
Credit: FRANCOIS GUILLOT
Share

Last week, Paralympic champion Oscar Pistorious was sentenced to five years in jail for shooting his girlfriend, model Reeva Steenkamp, in 2013. The high-profile case placed the spotlight on the athlete's home country, South Africa, touching on some of its most controversial struggles: gun control, race, and domestic violence.

Pistorious was accused of having a history of domestic troubles. Whether they extended to his relationship with Steenkamp or not, her fate is yet another statistic for South Africa, where homicide is disturbingly common. According to the United Nations Office on Drugs and Crime, South Africa's female homicide rate is five times that of the global average (2.6 per 100,000 women), and women account for 57 percent of total murders in the country.

But what about the rest of the world?

We used data from the UNODC's annual homicide report to create the graphics below, which show just how many women around the world are killed by spouses or close family members.

In their report, the UNODC explains why tracking intimate partner and family-related homicide, also known as interpersonal homicide, is so important:

[E]xploring intimate partner/family-related homicide is one way of gaining a clearer understanding of killing women due to gender motives. According to the UNODC, more than half of the women killed in Asia are killed by family members or spouses, with a total of 19,700 female victims of interpersonal homicide reported in 2012. The UNODC suggests that this is because of the prevalence of gender-based crimes like honor killings in the region.

The UNODC admits that gathering data on violence against women is an arduous task, which means this isn't an entirely accurate picture:

There are multiple challenges to measuring all forms of violence against women because of its complexity, the high "dark figure" that affects data based on victim reports to authorities (law enforcement and public health), the different means and criteria for collecting data on victimization which may not be comparable, and the difficulty of accurately measuring certain types of violence against women (such as psychological violence).

The red bar for each nation below shows the percentage of female versus male homicides among those murdered by an intimate partner or family member. Pay attention to the grey numbers on the right, which show absolute numbers of homicides for each nation. Those numbers vary greatly — for example, Iceland's "100 percent" represents only one homicide for the entire year. In contrast, India's 54.8 percent translates to more than 23,000 women killed by their spouses or family members in 2012.