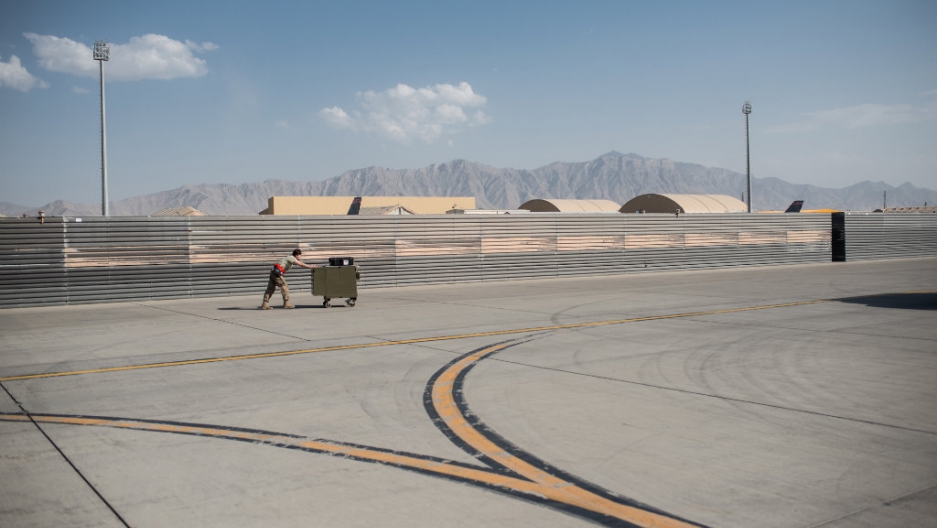 An aircraft mechanic pushes her toolcart across the tarmac at Bagram Airfield.
Credit: Ben Brody
Share

KANDAHAR, Afghanistan — The new American headquarters building at Bagram Airfield could be in an office building in middle America, the air inside cooled to a constant 70 degrees. This is the new normal for many of the 9,800 soldiers slated to remain in Afghanistan after the drawdown is complete.

As these rocket-proof office spaces take shape, those who still patrol in the countryside, fly the unfriendly skies and mend the wounded find their combat mission evaporating away, even as the Taliban retake lost ground around them. These last frontline troops are the insulation around the retreat in a lonesome landscape of a war gone by.

Boots on the ground

“At West Point they say if it rains on your graduation day, you’re going to war,” said 2nd Lt. Trevor Hanson, who graduated from the US Military Academy in 2013. “It poured on my graduation day, but with the war winding down I thought it was pretty unlikely I’d deploy. But here I am in Kandahar, rolling out the gate.”

Hanson is a platoon leader with Charlie Co., 1/12 Infantry, and is poised to be one of the last young lieutenants leading men in combat in Afghanistan. His unit is tasked with patrolling the villages surrounding Kandahar Airfield (KAF) – not exactly an austere outpost in poppy country, but still a mission that comes with the mix of risk and reward that inspires young people to join up.

The heart and soul of the military’s experience of war in Iraq and Afghanistan for the past 13 years has been the combat patrol, in vehicles and on foot. Nearly all the firefights, the explosions, the exhaustion and boredom, the little failures and the little triumphs, the endless meetings with intransigent local leaders, occur in the context of a patrol.

Many soldiers who deploy to war zones have jobs that prohibit them from leaving the relative safety and comfort of their bases, and often they chafe under the restriction. There is prestige in patrolling, even if it feels like the worst job in the world at the time.

On a warm, sunny autumn morning in Kandahar, Hanson and his platoon set out from their shrinking megabase and drove to a police checkpoint at Murghan Keche, just northeast of the airfield. No routine patrol would be complete without having tea with the local police commander and the village elders – and this was no exception. The classic counterinsurgency get-together is a scene that has been repeated over and over for the past 13 years. Impeccably dressed while sitting on the floor of a mud hut, checkpoint commander Dawlat Khan tried to figure out what Hanson wanted to hear while Hanson’s platoon sergeant wearily took stock of the charade.

The topic of discussion: Kandahar’s notoriously heavy-handed police chief, Maj. Gen. Abdul Raziq, had just made waves by radioing orders to his officers to summarily execute any Taliban fighters they encountered; Raziq was tired of taking prisoners only to have them escape.

“(Raziq) made a mistake by announcing this on the radio – he should have had a secret meeting,” Khan said, eliciting consternation from the young West Point grad. Khan then changed his tack, saying, “If they say to kill them all, these are the orders, but I feel we should hold them as prisoners to get information.” 2nd Lt. Trevor Hansen and Khan speak through an interpreter while walking through the moonscape east of Kandahar Airfield. Hansen's platoon patrols the area to prevent Taliban fighters from launching rockets at the airfield. Ben Brody/GlobalPost.

At this point in the war, Charlie Co. doesn’t police the police – they patrol to Murghan Keche and nearby villages regularly to keep Taliban fighters from launching rockets at Kandahar Airfield, one of the last bases still occupied by US troops. If Gen. Raziq’s officers are carrying out extrajudicial killings on his orders, there’s not much an American platoon can do about it.

At the big airfields at Kandahar and Bagram, another group is still “patrolling” all the time: fighter pilots. At Bagram the 303rd Expeditionary Fighter Squadron flies A-10 Warthogs, a single-seat jet built around a monstrous Gatling gun that makes a sound like the rending of space and time – and is as loved by ground forces as it is by pilots. But as the war winds down, the Pentagon is looking for ways to cut their budget, and the A-10 is on the chopping block.

“I had just moved to Kansas City, and wasn’t too sure about my neighborhood, when an A-10 from our squadron flew overhead,” said Lt. Col. Michael “Rio” Leonas, who is on his fourth tour in Afghanistan. “This little boy comes running up and says, ‘Mister, did you see that warplane?’ It felt pretty cool – a warplane is exactly what my jet is.”

Leonas excitedly shows off the features of his anachronistic warplane: the 20-foot-long cannon, built for incinerating Soviet tanks, the 500-lb bombs with manufacturing stamps from the last days of the Vietnam War. It is the antithesis of the new F-35 Joint Strike Fighter, a wildly capable, wildly expensive stealth fighter that has been plagued by problems and cost overruns. Air Force Capt. Geoffrey "Oreo" Manter is on his first tour in Afghanistan, piloting the A-10 Warthog. The plane is built around a massive 30mm gatling gun and is designed to support ground troops. There is a battle in Congress now whether to continue funding the A-10, and many pilots may have to learn to fly a new aircraft. Ben Brody/GlobalPost.

The Warthog, however, is the perfect plane to support ground troops in a place like Afghanistan – it’s comparatively inexpensive, reliable, flies relatively low and slow so the pilot can identify friend from foe, can take a pounding from antiaircraft fire, and can land on a dirt strip. And of course, it has that big gun. Ground troops say they often find that F-16 and F-18 pilots are reluctant to drop bombs near them, but A-10 pilots will readily use their cannon.

“When you fire the cannon, it’s like a hundred guys with ball peen hammers are bashing the steel panels all around you,” Leonas said.

At the 303rd EFS headquarters, which is a mix between an Army operations center and an airport lounge, the pilots play an eight-minute video showing gun camera footage from their last three months in Afghanistan. Set to heavy metal music, the clip shows dozens of airstrikes in eastern Afghanistan: the 30mm high explosive rounds chasing and dismembering groups of armed men on foot. A group of paratroopers watched the video with the pilots – men who had been attacked by every weapon in the Taliban arsenal. In the darkened room, they were quiet amidst the din of death metal and chaingun fire, surely imagining themselves in the Taliban’s position, and the horror of that onslaught.

“They could stop the war for two weeks and pay for the A-10 program for five years,” Leonas said, with an air of resignation. “Some of the younger guys, they could retrain on new aircraft, but if they retire the A-10, they’re retiring me.”

The wounded and the dead

At the height of the war, the Role 3 hospital at Bagram Airfield would treat a constant stream of gravely wounded American and Afghan troops coming in from the mountainous eastern battlefields - screams and curses echoing down the hallways, blood on the floor. Now the hospital is almost always quiet, and some hallways have the lights off to save electricity.

The hospital isn’t quiet because violence has decreased but because Afghan soldiers and civilians now have far less access to it. When tens of thousands of US troops were fighting in the countryside, they could easily facilitate helicopter evacuation to Role 3 for badly wounded Afghans. Now that US troops have left, the medevac helicopters have too, leaving Afghans largely at the mercy of their own 19th-century medical system.

One 47-year-old Afghan police officer made it to the US hospital on Aug. 24 after losing his legs in an improvised explosive device (IED) attack in Kabul the day before. Air Force surgeons Lt. Col. Brett Anderson and Maj. Ryan Finnan spent the morning cleaning his wounds in hopes they will heal well, but that is no easy task in Afghanistan. “If he were recovering stateside, he’d do fairly well, and he’d have access to physical therapy and advanced prosthetics,” Anderson said after the operation. “But here, he’s going to struggle. There’s no VA in Afghanistan, and the terrain is not conducive to wheelchairs.”

Tariq Mandozay, a young Afghan doctor on his first week of residency, observed the operation with resignation.

“I don’t have access to any of this equipment they’re using here,” he said, gesturing to the vacuum pump for sealing wound dressings. “We use kitchen tools in our operating room, because the government only lets us buy Afghan products. We usually can’t even stop bleeding.”

Finnan agreed, saying that the technology gap is so insurmountable that he’s not sure what Tariq could gain by observing the operations. Two years ago, Tariq was a housekeeper at the hospital, cleaning up trash and mopping floors.

As the American nurses wheeled the wounded police officer into a recovery room, a young Afghan housekeeper knelt, and began to sponge up the blood.