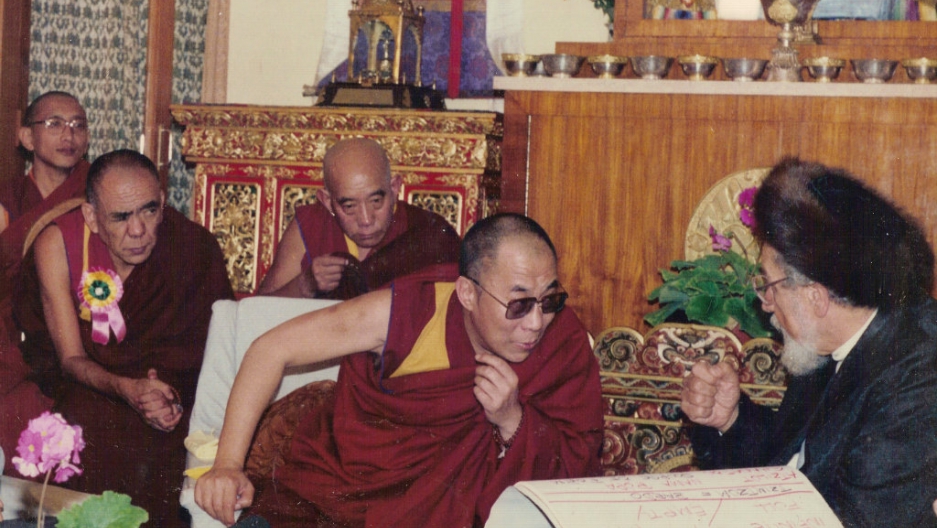 Reb Zalman explains the four worlds of kabbalah to his Holiness in Dharamsala during dialog.
Credit: Rodger Kamenetz
Share

In 1990, Rodger Kamenetz, a poet and LSU professor of English joined a small group of rabbis and Jewish religious thinkers in India for a dialogue with the Dalai Lama. They met in Dharamsala, the home-in-exile for the Buddhist leader of Tibet since the 1959 the occupation by Chinese Communists.

Kamenetz was on a journey of his own, and in Dharamsala he met a man who became his mentor, Rabbi Zalman Schachter-Shalomi.

Rabbi Schachter-Shalomi was a catalyst of the 1960s Jewish Renewal movement which sought spiritual depths in hasidic culture as a response to traumatic aftershocks of the Holocaust.

Reb Zalman, as he was known to those close to him, saw in the Dalai Lama, leader of the Tibetan Buddhist nation diaspora, a kindred spirit.

“Reb Zalman came to the Dalai Lama as a fellow exile. He carried the Jewish mystical tradition of a Europe that had been destroyed,” Kamenetz said in an interview in New Orleans recently, reflecting on the rabbi,who died on July 3 at his home in Boulder, Colorado.

The Dalai Lama had asked about the “the survival of Jewish spirituality in exile,” explained Kamenetz. And he had a second question too. What were the Jewish methods for overcoming difficult emotions — “afflictive states of mind?”

“Reb Zalman was one of the few people in American Jewish life at that time capable of explaining Jewish mysticism to a Buddhist master,” said Kamenetz. “He could share with the Dalai Lama the reality map of kabbalah,” meaning an ancient wisdom on the workings of life and the universe.

“He opened that same door to many American Jews who themselves basically knew almost nothing about the Jewish mystical tradition. That proved to be one of the enduring effects of the dialogue.”

Drawing on the discussions in Dharamsala, which included key reflections by another leader, Rabbi Irving Greenberg, Kamenetz wrote in his 1994 best-seller, The Jew in the Lotus: “The Dalai Lama had grasped an essential Jewish secret of survival — memory...The sacralization of memory has been an essential feature of Judaism throughout its history. We can see it today as Jews work hard to keep the memory of our Holocaust victims sacred.”

The Dharamsala encounters exposed Kamenetz to the reality of young Tibetans living in India or the West, detached from Buddhist practice.

“In that sense,” wrote Kamenetz, “the Dalai Lama and the rabbis shared a problem: How to keep religion relevant in a highly materialistic and secular culture; how to renew without losing continuity...The rabbinic party had its origin in the Babylonian captivity, when Jews learned to live without a temple. And so Jews had the fortune, or misfortune — to rehearse exile and develop its theology.”

“How do people come to terms with an anxiety born of destruction?” Kamenetz wondered aloud in the interview, behind windows shuttered from the relentless New Orleans heat.

“Talking to the Dalai Lama, who lost his home base, his temple, the choice was do you restore it or make it new?”

The Tibetans believe in a kingdom called Shambhala where peace is made manifest. Twenty years after the meetings in Dharamsala, the Dalai Lama, still exiled, has elevated Buddhism on the global stage while keeping a searchlight on the loss of human rights, and home, in Tibet. “Reb Zalman came from a hasidic tradition that spoke of gilgul or ‘the recycling of souls,’” said Kamenetz. “But when he ordained a group of Jewish renewal rabbis, graduates of the Aleph ordination program, he said ‘You are my transmission’ — meaning that each of them carries a transmission of his unique soul.”

“Judaism is 5,000 years old,” he continued. “He was trying to make the oldest parts of the tradition new and at the time showing how the new could be made holy.”

“He spoke about how after the Holocaust it was impossible to talk about God if you were angry at God. In Baltimore when I was growing up, the rabbi talked about civil rights, the state of Israel, and helped desegregate a local amusement park. But he didn’t talk about God to any extent that I recall.”

That was in the 1960s, when Jewish Renewal was just beginning to form. Reb Zalman was particularly focused on young people who shared an identity shadowed by the genocidal horrors, while many of them lacked exposure to the deep devotional traditions.

The New York Times obituary called the rabbi, 89, “the spiritual father” of a movement that drew on “ancient Judaic traditions of mysticism and meditation, gender equality and ecstatic prayer.”

In a life driven by spiritual searching, Reb Zalman married four times and had eleven children.

Paul Vitello’s obituary in The Times referenced his experiences with LSD and encounters with drug guru Timothy Leary, “which helped him form some of the innovations he brought to contemporary human practice.”

Born in a Polish town later annexed by the Ukraine, Reb Zalman was raised in Vienna. His family fled the Nazis; he reached New York in 1941. He earned a master’s in psychology of religion from Boston University in 1956, and doctorate in theology from Hebrew Union College-Jewish Institute of Religion in New York.

Reb Zalman’s deep engagement with Buddhism was part of a longer reach, that included dialogue with Christian mystics like Thomas Merton in seeking a universal essence of spirituality. He inspired Kamenetz to create a Passover Seder for Tibet, which the Dalai Lama attended in 1996.

“Judaism has a rich tradition of ceremonies,” Kamenetz continued. “The question I learned from Reb Zalman is, how do you make the tradition real in this moment? Where is God in this moment for you?”

Reb Zalman embraced certain changes in Western society as a signs of God opening toward humanity. He could connect Jewish mystical concepts of a female nature of the divine with contemporary feminism – an issue that has opened a deep theological split in the Roman Catholic Church between certain Vatican officials, bishops and communities of nuns, seeking a revised history of women in scriptural history.

Kamenetz continued: “In Jewish Renewal ceremonies, Reb Zalman fostered the use of feminine God language. ‘Blessed are thou, Lord’ became ‘Blessed are you, Shekhina, Divine Presence.’

Kamenetz pushed deeper on his spiritual renewal, communicating with his mentor, often by phone and later Skype, as Reb Zalman held the Wisdom Chair in Boulder at Naropa University, a Buddhist institution.

In Stalking Elijah, a sequel to The Jew in the Lotus, Kamenetz wrote of his continuing search: “We Jews are in a dialogue with the past that is in dialogue with itself, a very complex conversation over millennia of texts and milieus and cultures.”

As Kamenetz met with other rabbis influenced by the Buddhist exchanges, he heard from mutual friends about Reb Zalman’s meeting with several imams on the West Bank during one of his trips to Israel.

“He wanted to share with them a Sufi prayer, or zikr,” Kamenetz said.

“The imam kept asking, Are you a Muslim? Reb Zalman kept replying, I am a believer. The conversation was in Arabic. Finally Reb Zalman said, I'm a Jew. And I know there's a long history of fighting between our people, but wouldn't it be great if just this once, you and I could share this prayer since we both love God? The imam agreed and it was a joyous zikr. One of the rabbis present, Jonathan Omer-Man had participated in the Dalai Lama dialogue. He was on crutches. The imam lifted him up and carried him around. The dancing was joyous. I think that sums up Reb Zalman's ecumenical spirit. I think of it as a way that speaks not to the politics of the day but to the deeper yearning for living out a love of God that binds us all together. It is a quest, it is a search.”

Jason Berry, a GroundTruth correspondent, is the author of Render unto Rome: The Secret Life of Money in the Catholic Church, and was co-producer of the recent Frontline film, “Secrets of the Vatican.”