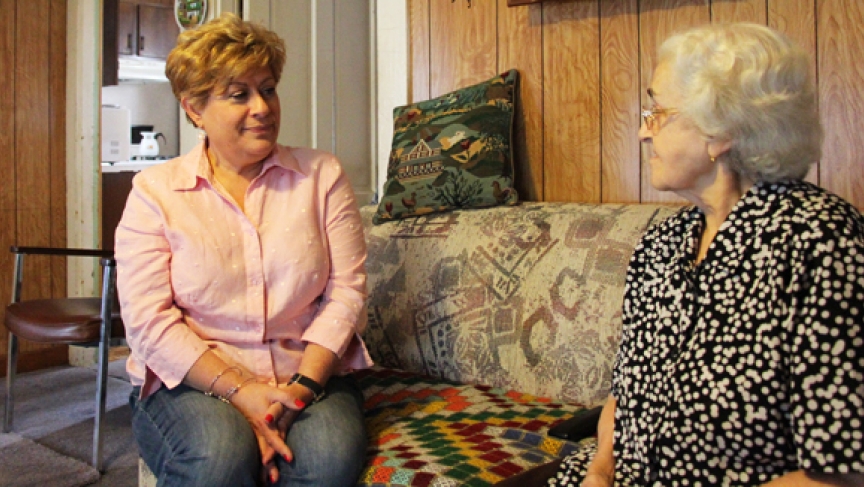 Lucy Oliveira of the New Bedford Immigrants' Assistance Center sits with 86-year-old Margarida Xavier, who moved to the US from Portugal in the 1960s. Oliveira visits Xavier's home every month and often helps Xavier read her mail.

In her grey, two-family home in New Bedford, Massachusetts, Margarida Xavier fixes a pillow on her living room couch before sits down. She fell earlier this year and her back still bothers her. She tells me what she can about it in English.

“I have 86 years old. That’s it!," she says, laughing. "Not too good, broken English." Her English used to be better when she was still working as a housekeeper, she says.

Xavier came to the US in the 1960s when she was in her early 30s. At the time, New Bedford already had a thriving Portuguese community. There was a Portuguese church, Portuguese restaurants and, not long after she arrived, a Portuguese library. New Bedford, a coastal town, became a microcosm of Portugal, and Xavier says she didn’t really need to know English.

But now her immigrant peers here are dying. Xavier has lived by herself on the first floor of her house since her husband died. Her son lives upstairs and helps care for her, but she still feels lonely. Getting old can be isolating, and not knowing English well makes it that much harder.

Xavier still feels connected to Portugal, but it’s the Portugal of her youth. Lots of the older immigrants feel this way, says Helena DaSilva of the New Bedford Immigrants’ Assistance Center.

“They emigrated and mentally they’re still there,” DaSilva says, “Even though Portugal has developed, they came and they stayed in that same mentality and the same traditions. I’d say that they probably celebrate more of the traditions here than the population there.”

You can see this in Xavier’s home: Every shelf and table holds aged religious memorabilia from Portugal. 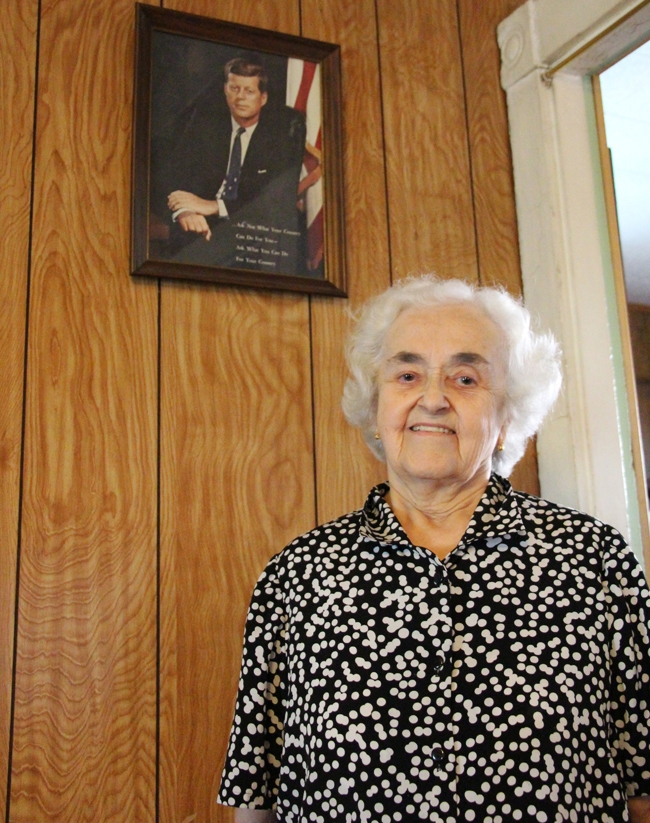 Margarida Xavier stands next to the framed print of President John F. Kennedy in her New Bedford home. Xavier was gifted the print from a family she worked for for 32 years as their housekeeper. Kennedy was the president when she and her husband moved to the US from Portugal.

“How many Jesus I have over here! See!” she says, pointing to statues and paintings. Hanging on one wall is a portrait of John F. Kennedy. “Kennedy, I like the Kennedy very much,” she tells me. JFK was the president when she and her husband arrived in the US. The family Xavier worked for for 32 years gave her the portrait as a gift.

“The first time I come, it’s so different now. Oh, my God,” she says. She tells me through an interpreter that people here are rude, and there are just fewer people to talk to. She points out framed photographs of her family: her parents, his sisters, they’re all gone, she says. “It’s not easy."

But there are still some pockets of the old days left. She has three sons, and every Thursday, one of them drives her to Our Lady-Mt. Carmel Church, down the street, for a weekly get-together of about 20 Portuguese seniors. “A lot of old ladies. We get confused,” she says, laughing, again.

Everyone chips in a few bucks for a game of bingo and a Portuguese lunch: kale soup and chorizo, pineapple cake, sweet rice. It’s a chance to talk and remember. “I like very much because everybody is very close and talk and it just feels very good,” she says.

Another version of this was story was originally produced for WCAI, the Cape & Islands NPR Station, a service of WGBH, as part of a six-part series on immigration in the region.