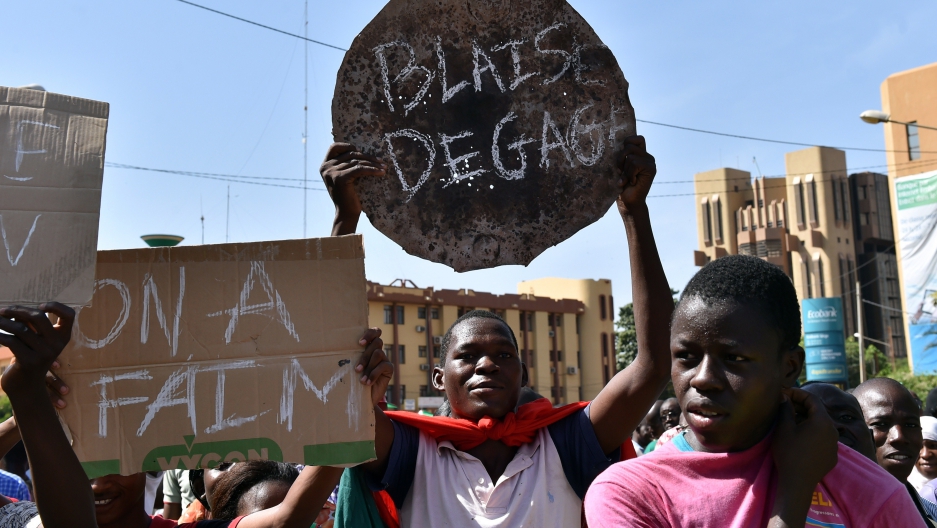 Protestors hold placards reading 'We're hungry (L) and Blaise, go away (R)' during a demonstration in Ouagadougou on October 29, 2014 against the high cost of living in Burkina Faso.
Credit: ISSOUF SANOGO
Share

NAIROBI, Kenya — Mourning in Lusaka. Protests in Ouagadougou. These are two separate events this week in two far-apart countries, Zambia and Burkina Faso, yet they point to a common malaise at the heart of African politics: aging leaders who refuse to give up power.

Zambia’s president Michael Sata, 77, died on Tuesday in a London hospital. The government had tried and failed to dispel rumors of Sata’s ill health by insisting he had traveled to the UK for a “check-up.”

In the location and manner of his death, he joins the long list of African leaders who are content to let their people suffer dismal healthcare at home but choose to travel abroad when their own wellbeing is at stake.

Death while in office isn’t all that unusual in Africa.

The trailblazer for hanging-to-power-until-you-die was Liberia’s William Tubman, who ruled for 27 years before dying while in office — though physically, in London — in 1971.

Since old (and not-quite-so-old) men who don’t know when their time is up are a mainstay of African politics, the protests this week in Ouagadougou, the capital of Burkina Faso, are not all that surprising.

Tens of thousands of people were met by tear gas on the streets of Ouagadougou on Tuesday when they marched against parliamentary plans to amend the constitution to allow President Blaise Compaoré another five-year term.

Compaoré, 63, is just the latest leader to try to change the constitution to allow himself more time to rule —  this despite having been in charge since 1987 (when Compaoré led a coup in which his predecessor, friend and revolutionary hero Thomas Sankara, was killed).

If he succeeds the Burkinabe president will follow in the footsteps of Uganda’s Yoweri Museveni, who succeeded in having term limits removed in 2006. In power since 1986, he is expected to run for election again in 2016.

The irony in Museveni’s case is how clear-eyed he was before taking power and how myopic he has become since. Back in 1986 he said: “The problem of Africa in general and Uganda in particular is not the people but leaders who want to overstay in power.”

The new one to watch is Rwanda’s Paul Kagame, who has ruled since 1994 and who looks to be in the process of pulling that popular sleight-of-hand whereby a ruler claims no interest in another term, but will bow to the people’s wishes to keep him.

A growing hubbub in Rwanda suggests Kagame’s current seven-year term, due to end in 2017, won’t be his last. At 57 Kagame is still vivacious and young, by African leadership standards.

Of course age is proving no barrier to his counterparts’ desire to stay in charge.

Sudan’s Omar al-Bashir, 70, has ruled since 1989 and is preparing to run again in 2015. 90-year-old Robert Mugabe, in power since 1980, won another election in Zimbabwe last year. Paul Biya, 81, has run Cameroon since 1982, while Angola’s José Eduardo dos Santos and Equatorial Guinea’s Teodoro Obiang are both 72 and have run their countries since 1979.

None show any sign of giving up power anytime soon.