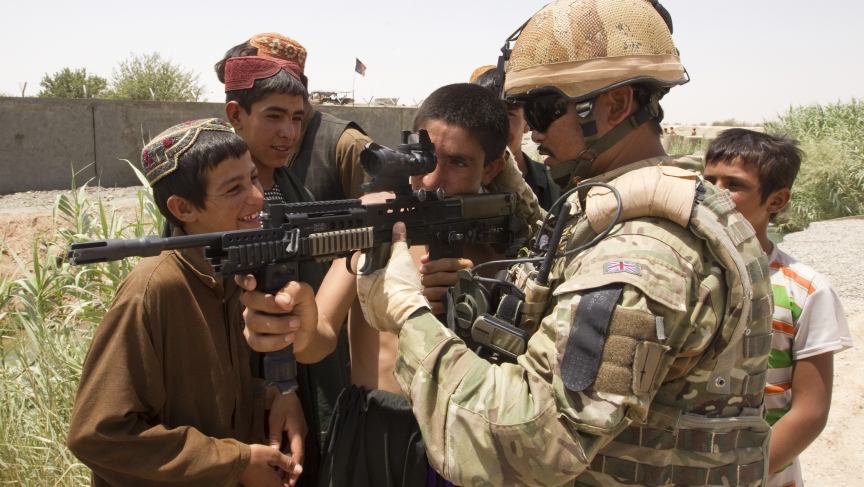 British Army Cpl. Birendra Limbu of the 2nd Battalion, The Royal Gurkha Rifles, shows his rifle to Afghan children outside the town of Lashkar Gah in Helmand province.

How do you feel about doing armourbarma on the way to Butlins? Or getting a craphat to check for Terry in a jinglytruck?

Unless you're a member of Her Majesty's Armed Forces, you're probably totally confused.

The British Army has a centuries-long tradition of picking up slang terms from the many countries in which it serves, both within the British empire and from other places around the world. And while the British Army lowered the flag at its last base in Afghanistan, the country has left its own mark on British military language and culture.

So in the above example, armourbarma is a method of checking for IEDs; Butlins was the name given to Camp Bastion, the army’s main Afghan base; craphats are members of a rival unit; and a jinglytruck is a highly decorated Afghan vehicle.

And Terry? Terry is short for the enemy — Mr. "Terry" Taliban, of course.

If some of those names sound oddly light-hearted, writer Patrick Hennessy, a former army captain, says that shouldn't be a surprise. “The British Army has a particular tradition of black humor," he says. "It’s much easier to fight someone if they are an object of ridicule than if they are an object of fear. The tendency towards something like 'Terry' is not intended to humanize the enemy — quite often the opposite.”

Terry has overtones of Jerry, the sarcastic name British soldiers used for German forces during the world wars. Giving a foreign enemy a banal, suburban British name helped Brits — who were similarly, maybe ironically, nicknamed "Tommies" during World War I — psychologically cut their opponents down to size.

Hennessy says he still has a fondness for Terry, at least as a name if not as an adversary. “There’s a famous comedian called Terry Thomas [in Britain] who was a bit of a ridiculous clown,"  he explains. “I always loved the fact that the nickname we came up with was more ridiculous than threatening."

Army jargon still carries the legacy of the British empire with it. Soldiers still refer to washing as "dhobi," derived from the Hindi word for laundry. Something obtained for free is said to be "bukshee," meaning "bribe" in Urdu and Hindi.

These words are looked on with pride as a sign of military heritage and history. Hennessy believes that tradition will carry over to include the slang of the Afghan war. “We worked very closely with the Afghan National Army, and a lot of the terms — like kandak for a battalion, or tolai for a company — [have been included]," he says. "I’m sure that in a hundred years time, sergeants on the drill square at the Royal Military Academy at Sandhurst will still be talking about kandaks to show their historical credibility.”

[From World in Words host Patrick Cox: We invited American vets of the Iraq and Afghanistan wars to tell us their favorite slang terms. Listen to the audio above for some of the cleaner responses.