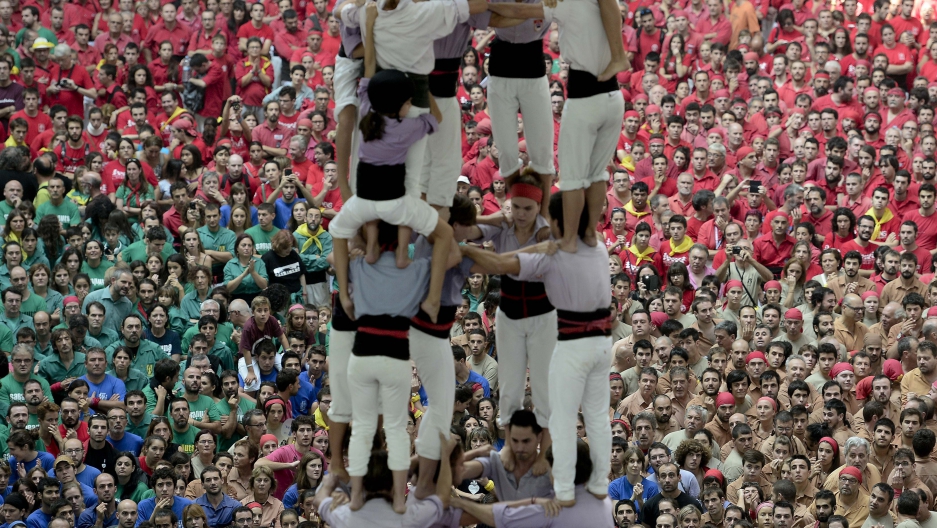 GIRONA, Spain — If a people's pastimes reflect its character, Catalans are clearly a formidable bunch.

On Sunday, hundreds gathered in front of this ancient city’s town hall to engage in the traditional building of human towers.

Men, women and children wearing white pants, broad black waistbands and brightly colored shirts to represent their towns or neighborhoods clambered on top of each other, balancing on teammates' shoulders until they towered high over the cobbles of the plaza below.

In a heart-stopping climax, the pink-shirted Minyons de Terrassa team constructed a rare 10-story tower, triggering a roar of appreciation from crowds gathered for the annual St. Narcis festivities.

The building of the towers, or "castells," dates back to at least the 1700s. It’s an undeniably impressive exercise in courage, organization and teamwork.

In the current tense political times, leaders of Catalonia's independence movement are hoping to harness the castellers’ grit and community spirit as they prepare to confront the Spanish government over breaking away from Madrid's rule next week.

"There is no way they can stop this," says Bernat Garrigos, an organizer with the Catalan National Assembly, a civil society group prominent in the independence campaign.

"People want to change this country," adds Garrigos, who turned to political activism after retiring as a casteller. "We feel very uncomfortable inside Spain, we can’t fulfill our minimum rights, needs, dreams."

Secession will not come easy, however.

Unlike in Britain, where Prime Minister David Cameron’s government allowed Scotland to hold an independence referendum before successfully campaigning to secure a "no" vote last month, the Spanish government is determined to prevent the Catalans from getting the chance to secede through the ballot box.

The pro-independence leader of Catalonia's regional government, Artur Mas, says he'll replace the Nov. 9 referendum with a non-binding vote across the region instead.

Although the exercise will have no legal weight, Mas and his supporters say it will send a powerful signal to the Spanish government and the rest of the world that Catalans are ready to split.

"We will have polling stations open, there will be ballots and ballot boxes, and everyone over the age of 16 will be allowed to vote,” he said when announcing the non-binding vote earlier this month. "This will not be the final consultation. It will be the one before last.”

From the winding alleys at Girona's medieval heart to the wild Pyrenees Mountains, parts of Catalonia already feel like a separate country.

In the remote La Garrotxa district — a land of thickly forested volcanic hills an hour's drive west of Girona — it's hard to find any evidence of Spain's presence.

Hearing Spanish on the streets is rare. The Catalan language has been picked up even by emigrants from China, India and Africa who work in the textile and meat industries in the district capital, Olot, and now make up a fifth of the town's population of 34,000.

In 2012, La Garrotxa declared itself "Free Catalan Territory," saying all Spanish laws are considered provisional pending their replacement under an independent Catalonia. Four more districts have followed, along with around 200 municipalities.

Although the move was symbolic, Olot's Mayor Josep Maria Corominas acknowledges, it underscores a deep commitment to independence.

"That feeling is very strong here," he says. "We have a tradition and a history that has formed us. We have a language, a culture and a social model that is different from the Spanish model. All this leads us to believe that we can be independent, that we can have our own state."

Corominas, who also serves as vice president of Catalonia's Association of Municipalities for Independence, is expecting a big turnout and a clear vote for independence next week.

"The relationship with Spain has to change, things cannot carry on like this," he says.

Many Catalans are new recruits to the separatist cause.

More than half of those who support independence say they were in favor of maintaining the union with Spain until a few years ago, according to a poll published in April by the Catalan government's Center for Opinion Studies.

The turning point for many came in 2010, when the Spanish constitutional court ordered a rollback of statutes granting greater autonomy to Catalonia that had been agreed with the former center-left government in Madrid and backed by 74 percent of Catalans during a 2006 referendum.

On top of that, the euro zone economic crisis has exasperated longstanding Catalan grievances about taxes from the region, Spain's richest, being sent to finance poorer ones.

Oil on the fire

Rajoy's attempts to ban the referendum have done more to push many Catalans into the secessionist camp. Recent mass demonstrations brought over a million protesters to the streets.

Although it remains peaceful, the independence debate is ugly, with levels of tension far beyond the discussions in Scotland ahead of the referendum there.

Both sides accuse the other of undemocratic behavior, but for many Catalans, the Madrid government's high-handed stance has served as a reminder of the dark days when their language and identity were suppressed under the 36-year dictatorship of Francisco Franco, who died in 1975.

"Rajoy has been putting oil on the fire,” says Antoni Buch, a 77-year-old wood carver in the village of Santa Pau. “We didn't use to be for independence, but he's behaved very badly and now almost everybody here will vote for it."

Rajoy has shown few signs of preparing to backtrack so far. His government is examining the legality of next week’s non-binding vote and has said it will ask the constitutional court to block it. It's also promised to ignore any results.

Catalan separatists are already preparing their next moves.

In the capital Barcelona, there's talk of calling early regional elections, with pro-independence parties on the left and right uniting to form a single bloc that would turn the vote into a de facto referendum.

If the deadlock continues, more mass demonstrations are likely. Some predict a further radicalization of opinion and warn of a unilateral declaration of independence. Many believe a split is inevitable sooner or later.

"It's going to happen, maybe as soon as in one year or a year-and-a-half," says Marta Sala, a Girona bookseller whose store specializes in independence-themed works.

Although polls show that more than 70 percent want the referendum to go ahead, they’re much less clear about how Catalans will vote if they get the chance.

More from GlobalPost: Putin cracks down against calls for greater autonomy in Siberia

The Catalan government's official polling agency shows over 30 percent want to keep the union with Spain. Polls in Madrid newspapers frequently put the unionists ahead.

A survey published this month by El Pais found just 29 percent supported independence, 16 percent wanted to keep the status quo and 41 percent would back union with Spain if more powers were devolved to the Catalan authorities.

Although Rajoy is unlikely to take the gamble, allowing Catalans the vote may be the only way to end a deeply divisive debate. It would even give the government in Madrid the chance of emulating Cameron's success in burying the independence debate "for a generation" by winning the Scottish referendum.