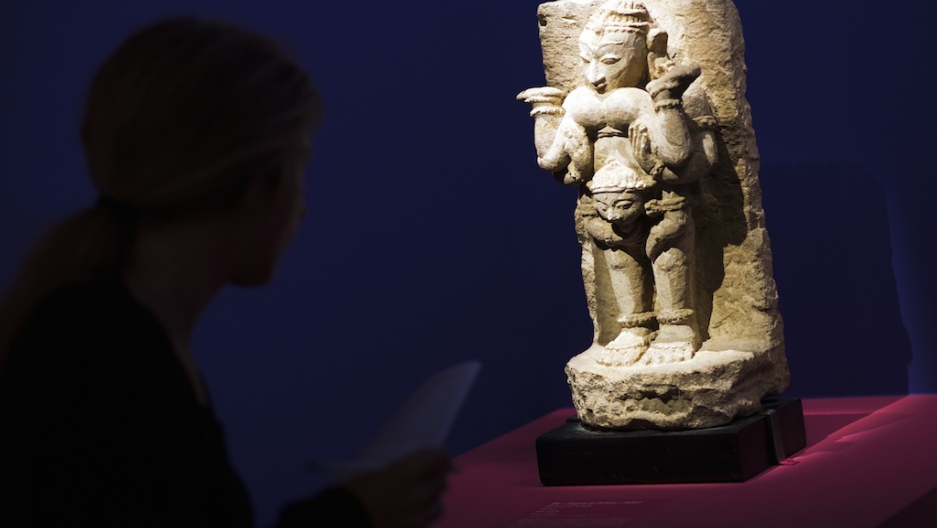 Sex ed is surprisingly awkward in the land of the Kama Sutra.
Credit: Lionel Bonaventure
Share

NEW DELHI, India — Here’s a universal truth: kids squirm in sex ed class — even in a country with ancient texts and monuments that celebrate and chronicle all sorts of coital kinkiness.

There are funny words and posters of intimacy and an anatomical exactness that seems less awkward in street slang.

Still, understanding our bodies and most primal urges is serious business, with far-reaching social implications.

Standing outside a makeshift classroom in New Delhi, a quiet 14-year-old said that lessons on sexuality and gender were what his neighborhood needs to learn the most. “I was talking to a girl, we were just working on a school assignment, and people started to gossip about us,” said Shahid Mohammed, a notebook in his hand. “Girls here aren’t allowed to leave the house. They’re scared to go out alone. People still think like they did in the old times.”

Mohammed, a lanky high schooler, was one of twenty teenage students corralled for a sex education class taught by The YP Foundation, a youth-led organization that works on advocacy and education. Organizations like YP Foundation have stepped in to fill a knowledge gap that they say fuels everything from unwanted pregnancies to violence against women.

Demystifying taboo topics is the most powerful way to combat the shame that can contribute to crimes like rape, one of the social diseases that has brought sexual education into the limelight, said Nilima Achwal, a Mumbai-based educator and activist.

After the Nirbhaya case — a highly publicized gang rape of a 23-year-old student in Delhi — the national dialogue has turned toward the safety of women, said Achwal, who founded Yuja, a social venture focused on teaching youth about sexual health and gender equality. And while much of it is about bringing rapists to justice, she hopes her initiative will help “channel the anger into action.”

“I really believe that unless we can talk about sex, we can’t even talk about equality,” said Achwal.

It’s clear that not everyone is having critical conversations about either topic: More than 6 million female fetuses have been aborted since 2000 because of their gender, 2.4 million people are living with HIV and AIDS, and the most common oral contraception for young, unmarried women is the morning-after pill — a high dose of hormones designed only for emergencies. And 72 percent of youth in 2012 said they had practiced unprotected sex, according to the International Planned Parenthood Federation.

Meanwhile, the government has sent conflicting messages. While most states include some meager adolescent health education in tenth grade curriculum, a Supreme Court decision in 2005 stated that sexual education was not a fundamental right. Just this summer, India’s health minister, Harsh Vardhan, reportedly called for a ban on “so-called sexual education” — calling instead for what he deems culturally appropriate education. (The health ministry did not respond to multiple requests for comment for this story.)

That culture factor that Vardhan mentioned makes teaching sex ed somewhat complicated in the mosaic of social and sexual norms in India.

In Mohammed’s class in Delhi, the students’ parents had yet to be told what their kids were learning. It was described as just a health class.

“Our biggest fear is the beginning sessions,” said Shreya Agarwal, one of the YP Foundation volunteers trained to teach sexual education. “A couple of people walk out. The parents might pull their kids out.”

In the back room of a family’s home, the students — barefoot and boisterous — shook off the lessons of their school day. Agarwal and her team of four other volunteers turned on slow Hindi music and hung posters across the freshly painted mint-green walls. They showed two people holding hands, a woman and man going to work, the outline of two growing adolescents. For the next hour the students were asked to reflect on the photos and draw or write their own thoughts.

The volunteers started with broader concepts like equality in the workplace, reserving the explicit topics for later in the course. Agarwal said the nature of the community — comprised mostly of conservative families working as maids and cooks across the city — can require a gradual approach for bringing up sex.

Achwal, the sexual health educator in Mumbai, said it’s just as important to be clear and direct as it is to be culturally sensitive. She and her team at Yuja have taught over 300 children across four low-income schools in the city, and now are starting to work in villages in Maharashtra.

“I think the biggest mistake people make is to bring their own shame into the classrooms,” she said. “I believe in telling them everything. When you omit something, you’re telling them something is wrong with that.”

Like Achwal, it was the Delhi rape that pushed entrepreneur Avani Parekh to put the final touches on her project, Love Doctor, a website and mobile service that allows users to anonymously ask questions about relationships, sex and everything in between.

There’s a lot, Parekh said, in between. Sitting in a cafe earlier this month, the American-born Indian explained the initiative in two ways: First, as an entrepreneur breaking into an untapped market, addressing an older group of 20-somethings who can’t always be reached through schools or youth programs or classrooms. And second, and perhaps more importantly, as a woman who has worked for years with domestic abuse victims, and struggled with her own past trauma.

With this foundation, she and her team of trained volunteers have answered questions ranging from navigating intimacy within a new marriage and college crushes to unwanted pregnancies. And while she gets the occasional jokester testing the surface of Love Doctor, she said most of the 80 or so daily queries she receives are sincere.

“Sometimes people need more technical information, but other times people just want someone to listen to them, to validate them,” Parekh said. “It can be very lonely in this country of one billion people.”

From the anonymous users sending texts to Love Doctor to teens like Mohammed, the first in his family to formally discuss gender equality and sexuality, the efforts to bring awareness to the Indian public are gaining traction.

“These outdated ideas, the violence, it all comes from a place of confusion,” Achwal said. “If you give people education and seeds of being aware, you will create much greater change.”