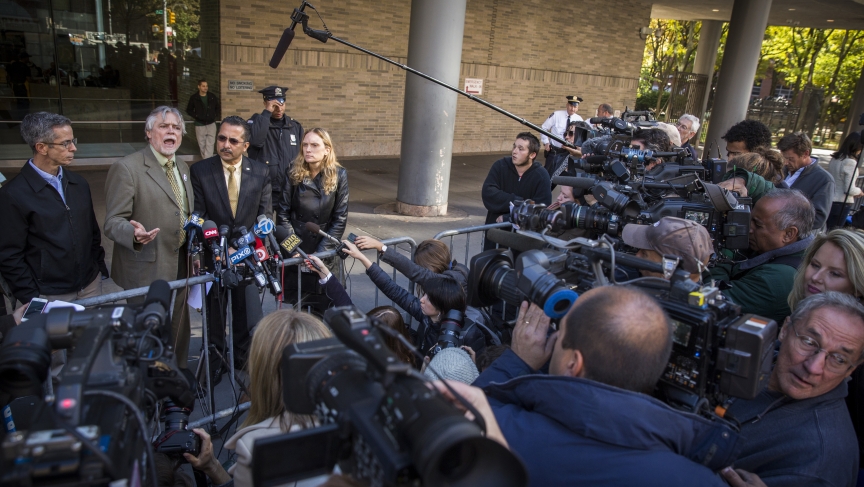 Housing Works CEO Charles King, second from left, speaks out against the current quarantine rules put into effect in New York and New Jersey following Ebola fears in the region outside of Bellevue Hospital in New York on October 27, 2014.

After facing harsh criticism this weekend from the White House and members of the medical community, Govs. Andrew Cuomo of New York and Chris Christie of New Jersey backtracked on their plans for mandatory quarantines for people returning from Ebola-stricken countries.

The two states had announced plans for mandatory 21-day quarantines for anyone coming to the US from those countries, but the case of nurse Kati Hickox created an uproar. "This is an extreme that is really unacceptable, and I feel like my basic human rights have been violated," Hickox told CNN from the tent where she was being held after returning from medical work in Sierra Leone despite exhibiting no symptoms of Ebola.

Cuomo said those who exhibit no symptoms can spend their quarantine at home, adding that they will receive compensation for lost income. Christie also relented, allowing Hickox to return to her home in Maine with careful monitoring of her health.

When it comes to the treatment of Hickox, who spent the weekend in an isolation tent outside Newark's University Hospital, Dr. Eric Manheimer said it seems that officials were overreacting. Manheimer was the chief medical officer from 1997 to 2012 at Bellevue Hospital, which he says has a long history of treating patients facing infectious diseases.

Manheimer says there should be “designated centers” to properly treat Ebola patients, adding that healthcare workers returning from West Africa need to be treated “respectfully.” Bellevue Hospital is currently treating Dr. Craig Spencer, who's being quarantined after exhibiting Ebola symptoms following his return from work in Guinea.

“They can clearly be at home and just be checked on regularly by public health workers to make sure that they’re ok,” he says. “But one does not have to go overboard and have them imprisoned.”

Dr. Manheimer points out that during the SARS outbreak of 2003, officials were able to contain the disease in the US without being too aggressive.

Many health care professionals have worried that the stringent quarantine policies will discourage health workers from volunteering their time to go to West Africa. And Manheimer believes thousands of highly trained volunteers — doctors, nurses and ancillary personnel — are currently needed in West Africa in order to effectively fight the Ebola virus

“We’re going to need a critical workforce of thousands and thousands of dedicated people to go there to help contain the virus,” he says.