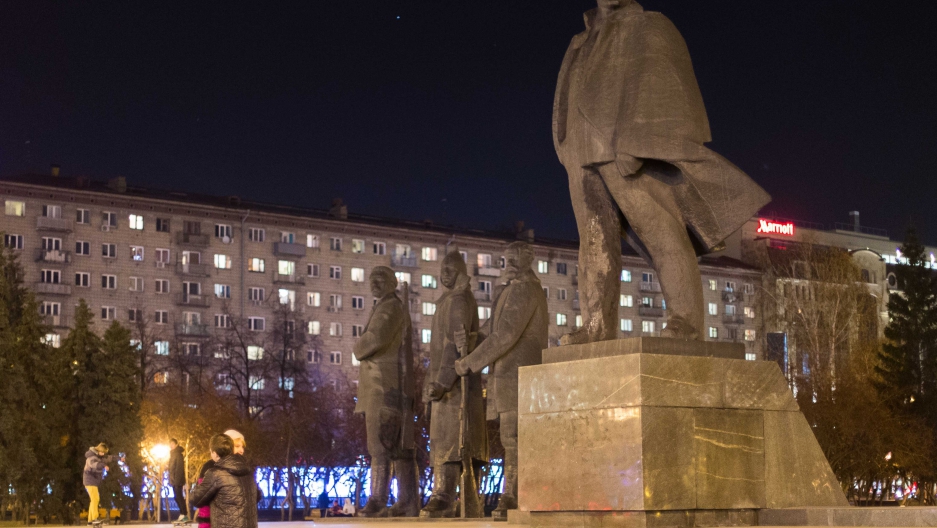 Lenin presides over downtown Novosibirsk, where some explain Siberian identity as a sense of freedom and tenacity.
Credit: Dan Peleschuk
Share

NOVOSIBIRSK, Russia — When Alexander Bakayev mentions Moscow or any other city west of the Ural Mountains, he speaks of “Russia” as if it were another country.

This place, some 1,800 miles east of the capital, is simply “Siberia.”

“Siberians are different,” says the social activist and filmmaker. “They stand out.”

People here have felt freer from Moscow’s control for centuries.

Just don’t tell the Kremlin, which is trying to ensure any notions of regional freedom stay well within a small circle of artists and activists lobbying for greater recognition — political, cultural and otherwise — for this vast Russian expanse.

Despite Moscow’s support for the separatist rebels who have seized swaths of eastern Ukraine and demanded independence, officials have made it clear they’ll tolerate no such movement at home by stifling even the faintest calls for more rights in Russia’s regions.

After Ukraine’s crisis broke out earlier this year, pitting the country’s new Western-looking authorities against pro-Moscow gunmen — originally dubbed by Russian state media as “supporters of federalism” — activists here saw a chance to test that argument by organizing a “March for Federalization.”

Konstantin Eremenko, one of the organizers, says it was aimed at “putting our authorities through a sort of cognitive dissonance.”

“We wanted to ask why it’s a good thing there, but a bad one here,” adds the wiry, bespectacled painter, who’s spent years as part of the local subculture.

It was more performance art than politics, but the official response was telling.

Not only did the authorities ban the march; they also blocked the event’s social media pages and castigated news outlets that covered the story.

Russia’s federal media watchdog even threatened to shutter the BBC’s Russian-language service after it carried an interview with another organizer.

Eremenko and several others were briefly detained. But the Novosibirsk activists were lucky.

When their counterparts in the southern region of Krasnodar staged a similar demonstration, officials filed criminal charges of “extremism” against at least two of them.

The harsh tactics may be partly motivated by the fact that controlling Russia’s seemingly infinite Asian landmass has never been easy for Moscow.

Short-lived dreams of greater Siberian autonomy, and even independence, flickered briefly in the 19th and 20th centuries before they were quickly suppressed by the tsarist and Soviet authorities.

But that didn’t stop at least the semblance of a Siberian identity — explained by some as a sense of freedom and tenacity — from taking shape.

“I identify myself specifically as a Siberian because it formulates a particular character and a particular outlook on the world and on life,” says Bakayev, who co-chairs a Siberian cultural autonomy group.

Nevermind that only several thousand people listed “Siberian” as their nationality in a 2010 census — out of a national population of 143.5 million — or that any notions of autonomy are little more than pipe dreams for a select few.

For most others, “Siberian” is a practical sense of identity formed by extreme surroundings. One local joke says that “Siberians don’t freeze — they just dress warmly.”

But there is one matter everyone can get behind.

After his ascent to the presidency 14 years ago, President Vladimir Putin consolidated power in Moscow by bringing Russia’s far-flung and multinational regions under greater control.

Besides banning elections for regional governors in favor of Kremlin appointments for many years and ensuring party organizations remain loyal, that also meant sending the lion’s share of local taxes to Moscow — a big deal considering Siberia’s main resource, oil, is the country’s top money-maker.

Local critics complain that Siberians see few returns from their contribution to a federal budget that fed the country’s rebound from post-Soviet turmoil in the 1990s.

Yevgeny Mitrofanov, head of a local consumer-protection group, says the quality of life in Siberian regions lags far behind that of Moscow and St. Petersburg.

“The main thing is that there’s no one with whom to raise these questions,” he says.

Mitrofanov, who also co-chairs the autonomy organization with Bakayev, adds that officials have addressed the issue by being quick to throw cash at regions posing a direct threat to Moscow’s rule, even if they contribute little to the federal budget.

That’s the case with Chechnya, the predominantly Muslim and formerly war-torn region now ruled by strongman Ramzan Kadyrov, who receives a seemingly unending flow of funds from Moscow.

“It’s not right,” Mitrofanov says. “Where’s the logic in that?”

That’s why he and his like-minded peers are calling for what they describe as true federalism, which would provide Russia’s regions with a greater say over how their resources are used.

The Kremlin has been notoriously wary of such potential for national self-determination, especially given the country’s enormous size and kaleidoscopic array of nationalities.

Late last year, only months before Russia seized the Black Sea peninsula of Crimea from Ukraine, Putin signed into law new measures punishing public calls for separatism with a prison sentence of up to five years.

From the Kremlin’s point of view, says Alexei Mazur, a local political reporter, any displays of self-determination are akin to “a virus leading to a sickness that debilitates the entire organism.”

Others agree that the heavy-handed official reaction reveals a telling sense of paranoia about the potential for social discontent boiling over as the country’s economic situation worsens, thanks partly to Western sanctions.

“It speaks to the fact that their internal fears are stronger than the actual threat,” says Alexander Kynev, a Moscow-based regional politics analyst.

In Siberia, the Kremlin appears to be taking a variety of steps to ensure loyalty.

Besides outright intimidation, Putin has floated the idea of transferring some federal agencies to the Siberian city of Krasnoyarsk. He’s also casually suggested the region might make a good home for several state-run companies currently based in Moscow.

Although locals concede officials shouldn’t worry much about Siberian loyalty — for the time being, anyway — Mazur, a journalist for the Novosibirsk online news portal Tayga.info, says a basis for potential widespread resentment does exist.

But the government’s bureaucracy is so opaque, he adds, that few officials are interested in crunching numbers to prove exactly why, for example, roads in Novosibirsk are so much worse than in Moscow.

“The main thing is for people not to start wondering,” he says. “The entire political system in Russia is built on keeping the average citizen in the dark.”