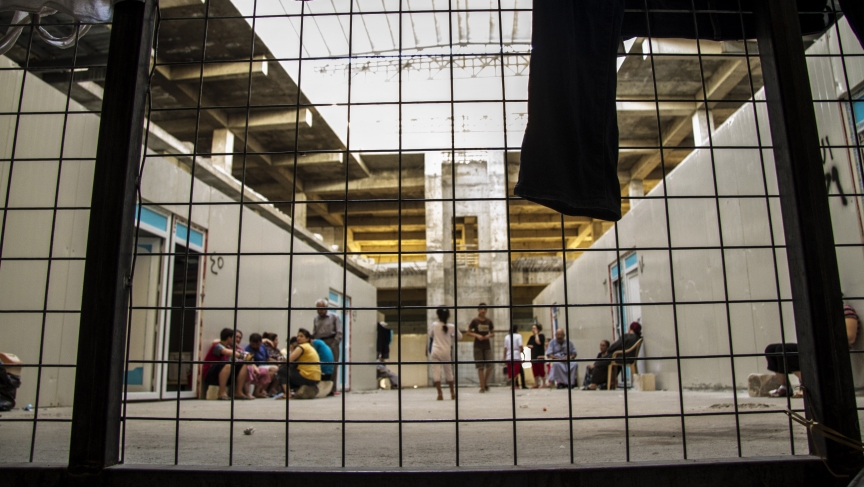 The main atrium of this would-be mall is now home to hundreds of Iraqis from villages outside Mosul. Here the concrete floors and walls give families more protection than the displaced families living in tents in a public park just across the street.

In the historically Christian neighborhood of Anikawa in Erbil stands the concrete shell of what was going to be a shopping mall. It was a sterile construction site just a few months ago. Now it's home to hundreds of displaced Iraqis from Mosul.

The front stairs and sidewalk are crowded with people coming and going, men sitting around and kids playing. The building is nothing more than concrete floors, ceilings and columns. Families live in pre-fab rooms made of plastic and metal that look like shipping containers without ceilings. The mall’s roof, only partially finished, is patched up with plastic UN tarps.

Leila Mansoor lives in one of these prefab homes with her family. The walls give her and her daughters a bit of privacy, she says, but you can hear everything. Between her neighbors and the busy streets outside, it’s always noisy.

She does recognize her family has it a lot better than the refugees just across the street. There families live in tents atop packed dirt in a public park. When it rained recently, the park became a mud pit. 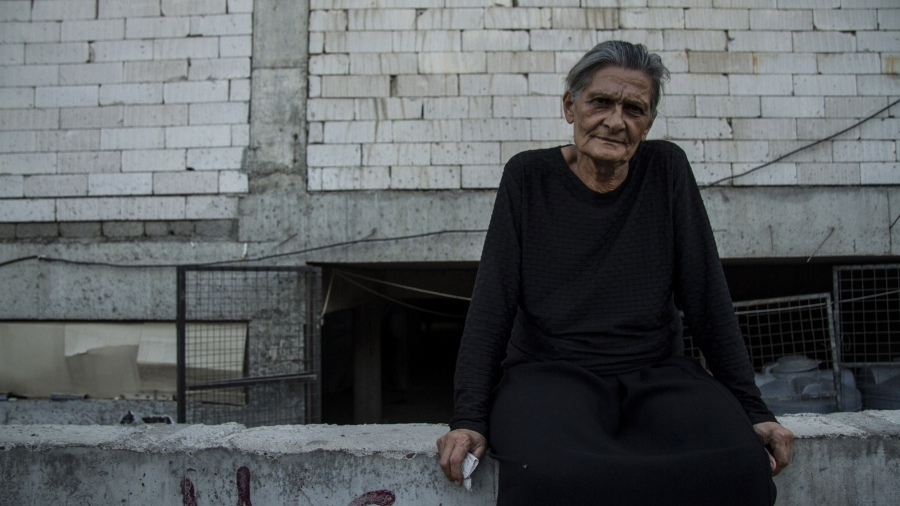 Leila Mansour, from a village outside Mosul, is in her 70s and now lives in the half-finished mall behind her. She says she knows she’ll probably never go home.

A few miles away on the edge of town, another half-finished construction project is housing hundreds more displaced Iraqis. It was also intended to be a grand shopping center, but the railings around the building’s half-finished central atrium are now criss-crossed with clothes lines.

Ibrahim Shaba is from a Christian village outside Mosul and has been volunteering here. He says there are dozens of buildings in Erbil like this one, housing displaced families. And now, with colder, wetter weather at hand, more people are trying to move out of camps and into these abandoned buildings.

On the third floor, new room dividers — these ones made of drywall — are being put up. The owner of the property has allowed the refugees to stay there for another few months, Shaba says. After that, he doesn’t know.

Aid agencies say all the unsightly empty buildings littering the city may just be Erbil’s saving grace. Because of them, there aren’t as many tent camps in need of “winterization.”

But both of the would-be malls are relatively small construction projects in Erbil, owned by local businessmen who feel a sense of duty to give back. That’s not the case downtown.

Not far from Erbil’s brand new airport, luxury offices and apartment buildings also stand half finished, construction cranes suspended. But heavy security is set up to keep displaced families out.

Brahim Thiya, who runs a small cell phone shop, says he remember the frantic construction — and when it all stopped.

He expects the economy in Erbil to bounce back for the same reasons the city attracts refugees: it’s relatively safe, and people get along. Eventually, he says, the big businesses will come back and construction will resume.

That will be great for Erbil, but what it means for Iraqi refugees is anyone’s guess.